If you didn’t get a chance to attend our first Summer Series lecture in June on the historic dress and portraiture at Mount Stuart, you can now read all about it in our two latest blog posts! MLitt students from the University of Glasgow's Dress and Textile Histories programme - Annie and Gabriela - have described and illustrated their research on the coronation robes worn by the Marchionesses of Bute, and the ‘Spanish Grandee Dress’ worn by Lord Mountstuart. Read both blogs to piece together fascinating stories of fashion, dress, and representation in the Bute family!

It was my pleasure to participate in the work placement at Mount Stuart in collaboration with the University of Glasgow’s Dress and Textile Histories postgraduate programme. Over the course of four months, I studied an incredible piece of Bute family history through alterations, portraiture, and archival research. For over 250 years, Mount Stuart has preserved the coronation robes made in 1761 worn by Mary, Countess of Bute, for the coronation of George III. These robes were worn by multiple marchionesses for coronations, portraits, and important events, most recently for the coronation of George VI in 1937. Dress history can give us insight into individuals throughout history and the robes provide us with details about the Bute family women. As a dress historian this project was a dream! 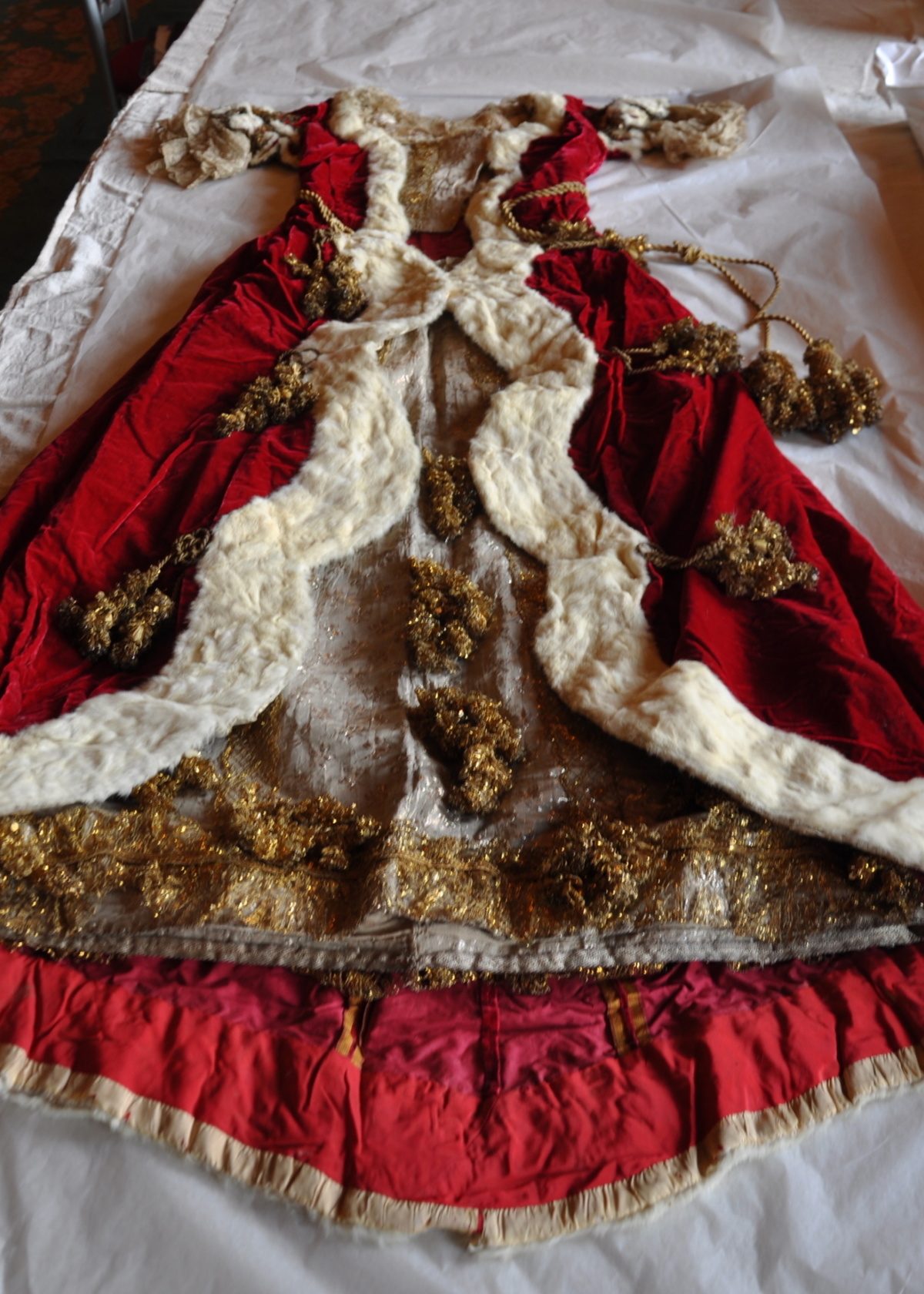 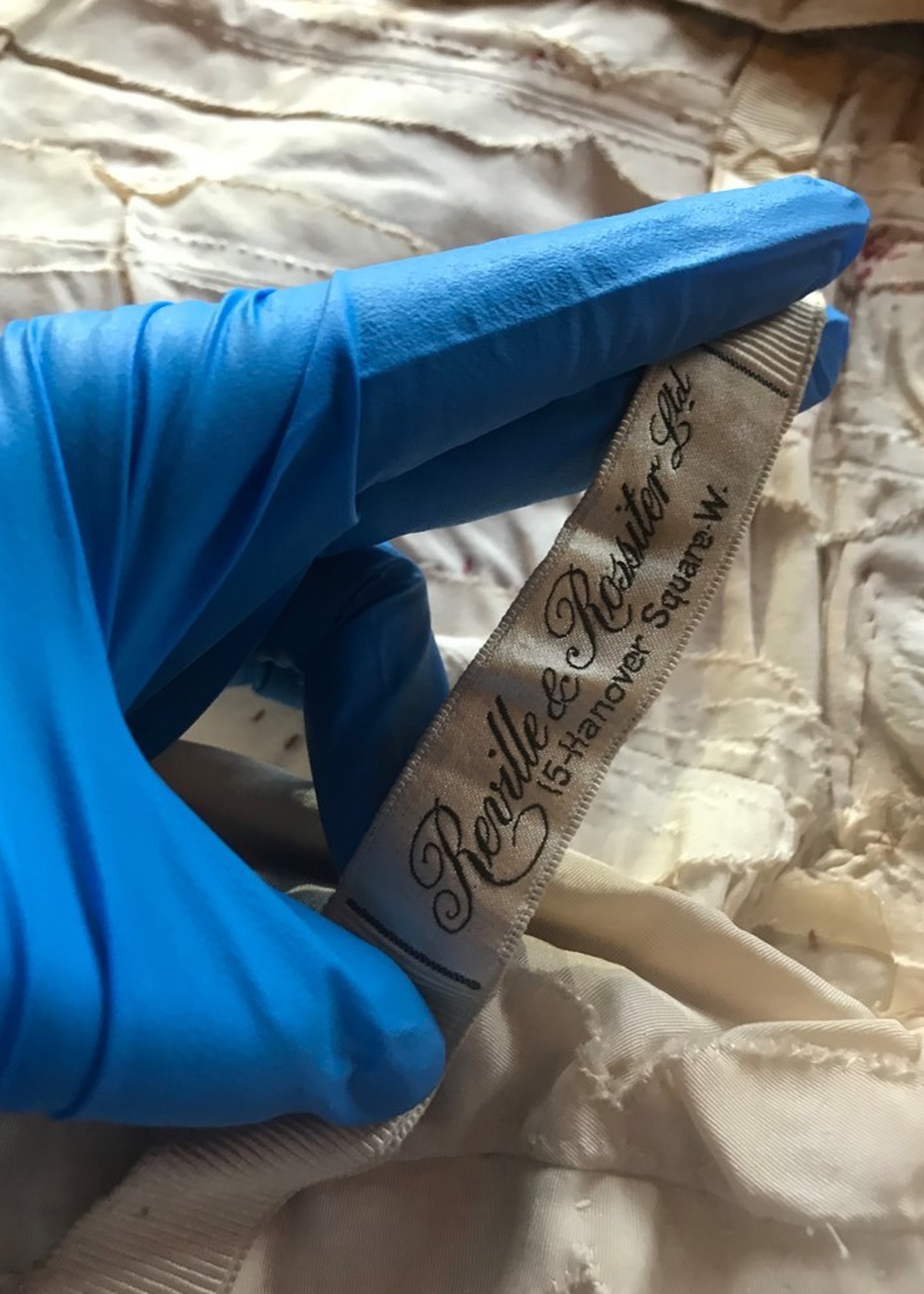 Exploring the dress collection, archives, and portraits at Mount Stuart gives a dress historian wonderful information about coronation dress. The Bute family has been attending royal coronations for centuries. Ceremonial dress is an important part of court as it illustrates wealth, power, and status. Tradition plays a vital role in ceremonies such as coronations. Specific and traditional dress codes were required to attend. Every aspect of dress, as well as etiquette, is strictly proscribed. The style for such formal occasions has remained similar for centuries. The peerage, including the women of the Bute family, appear in dress that is not necessarily in fashion. Mount Stuart illustrates this concept beautifully, as the coronation robes have been worn by multiple marchionesses for portraits and coronations since 1761. In this 1831 fashion plate from the Victoria & Albert Museum, we can see the similarities between the Bute robes even though they were made nearly 100 years before. 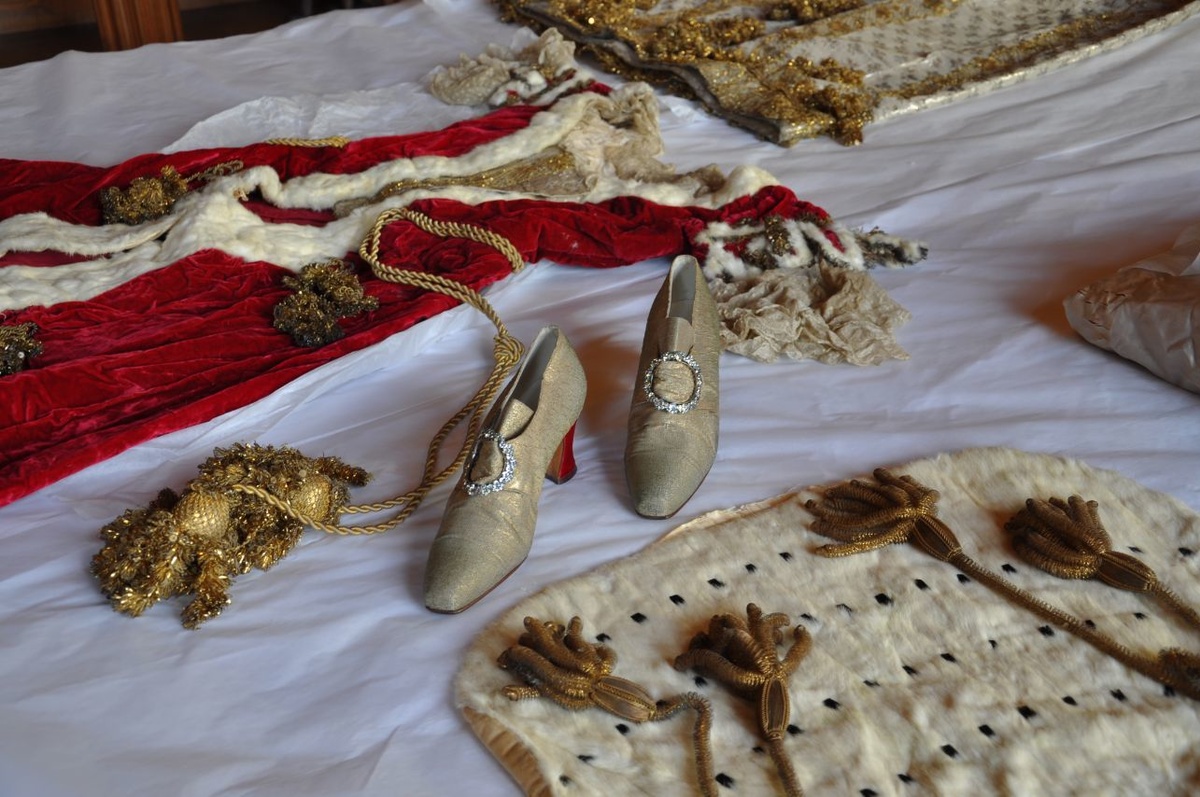 The coronation robes in the Bute family collection consist of a mantle, kirtle, ermine cape, skirt, silk chemise, shoes, and an embroidered handbag.

The second card reads: “Shoes (gold with red heels) made for Augusta Marchioness of Bute. Worn at the coronation of George VI, 1937. Also a red velvet bag, used by her on the same occasion-it is Indian and embroidered in gold.”

These cards have been kept with the robes since 1937 to provide dates and information. 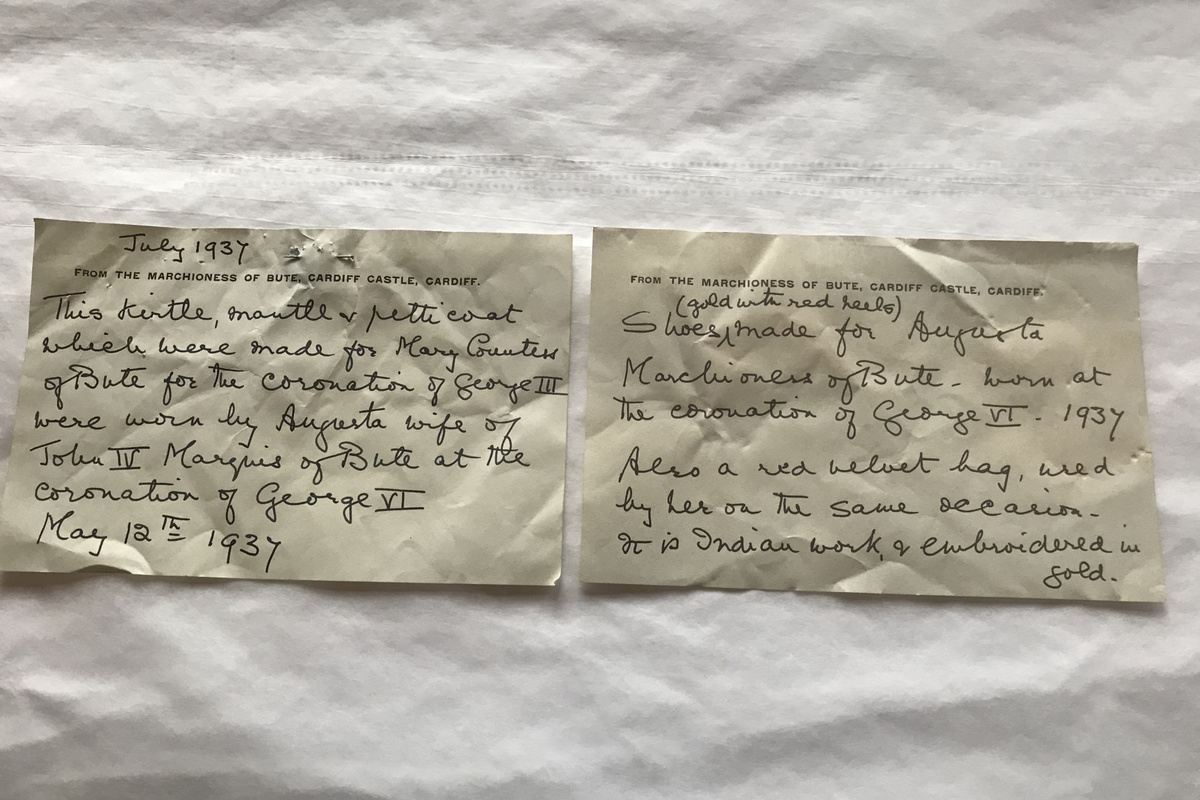 The mantle is made of red silk velvet, white ermine trim, and is lined with silk. At approximately 297cm in length, the mantle is worn over the kirtle like a cape, with the ermine cape attached at the top. The ermine cape has two and a half rows of black ermine tails. This is a specific choice to symbolize the rank of the wearer. It is adorned with shimmering gold and metal tassels that still shine today!

The kirtle, which is a robe that is fitted at the waist, is also made of red silk velvet and white ermine. The kirtle features a bodice that has been altered most recently to fit Augusta, 4th Marchioness of Bute. The inside label provides evidence of the alterations. The label reads “Reville and Rossiter Ltd. 15 Hanover Square W.” Reville and Rossiter was a court dressmaker founded in 1906. There is also a label with “Marchioness of Bute” written in pencil by the design house. The kirtle has a bodice with gold lace that matches the skirt. There is an intricate lace along the collar and at the sleeves that adds gorgeous detail. The kirtle has a scalloped hem of ermine and is fitted at the waist but open below to showcase the passementerie, gold trimmings and tassels, on the skirt. 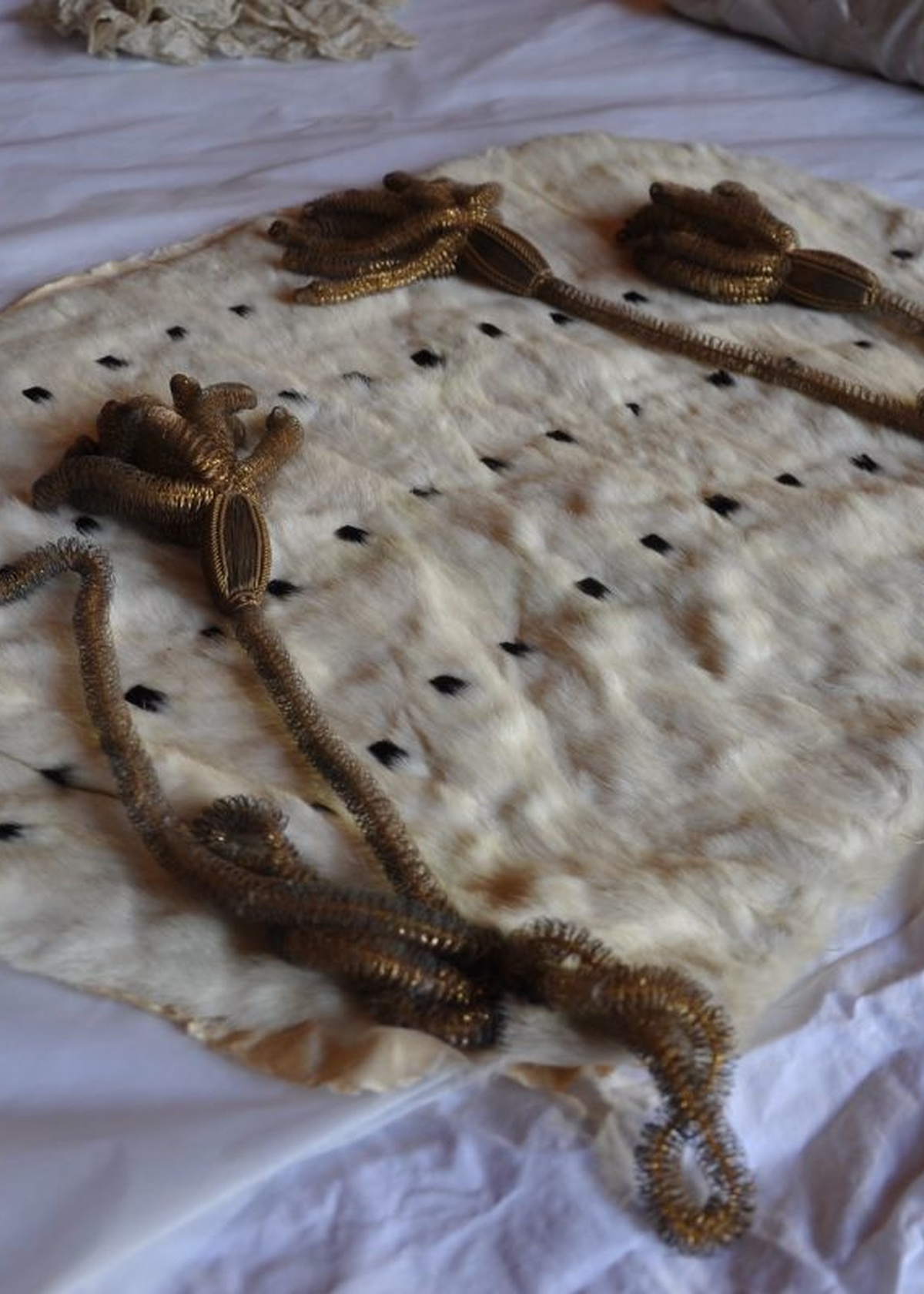 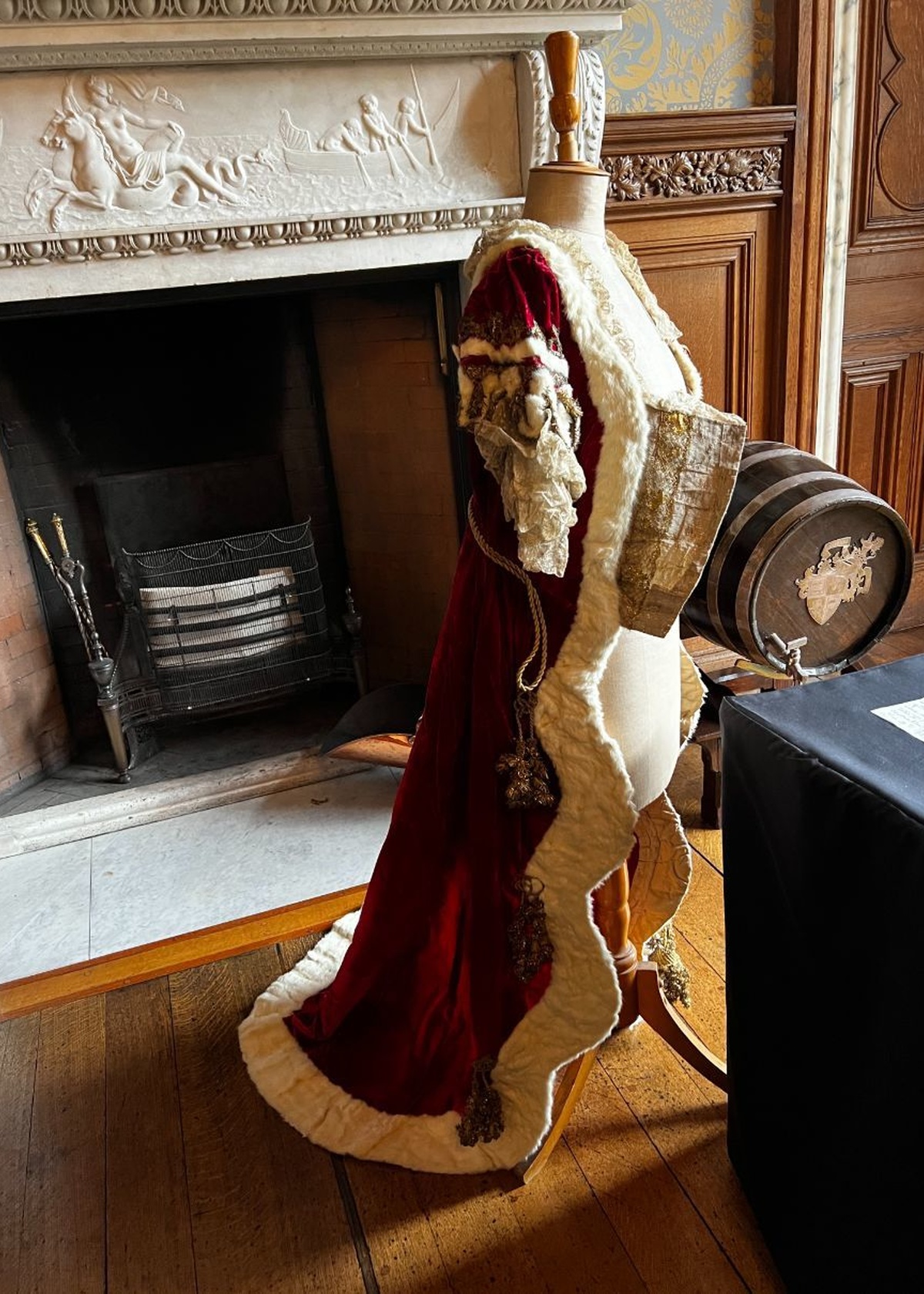 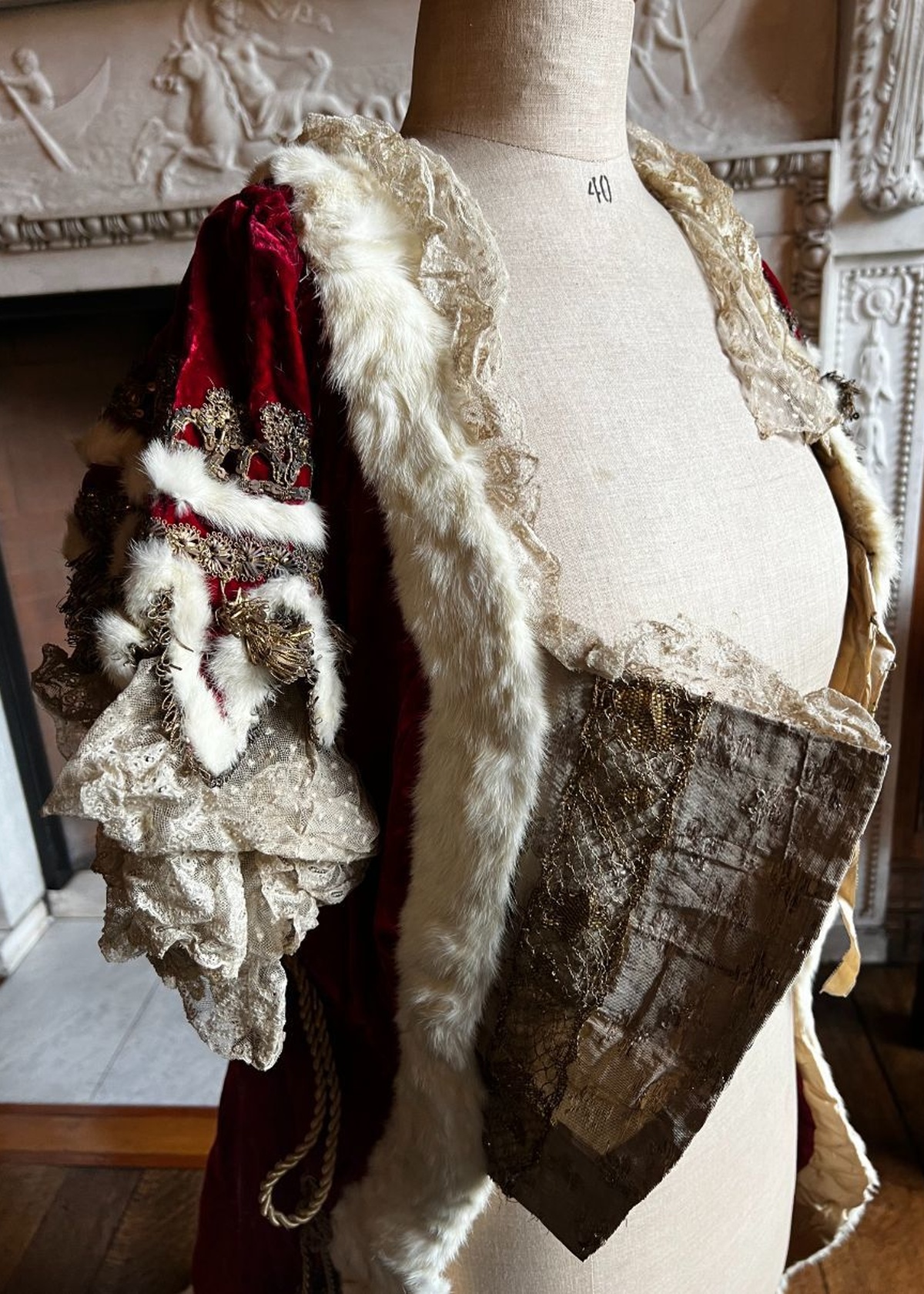 The red velvet handbag, lined with bright green, has intricate embroidery along the edge of the bag and throughout the back. The gold shoes, made for Augusta, feature a red velvet heel and sparkling decorative buckles. They were made in 1937 by J. Pluchino, a court shoemaker in London. 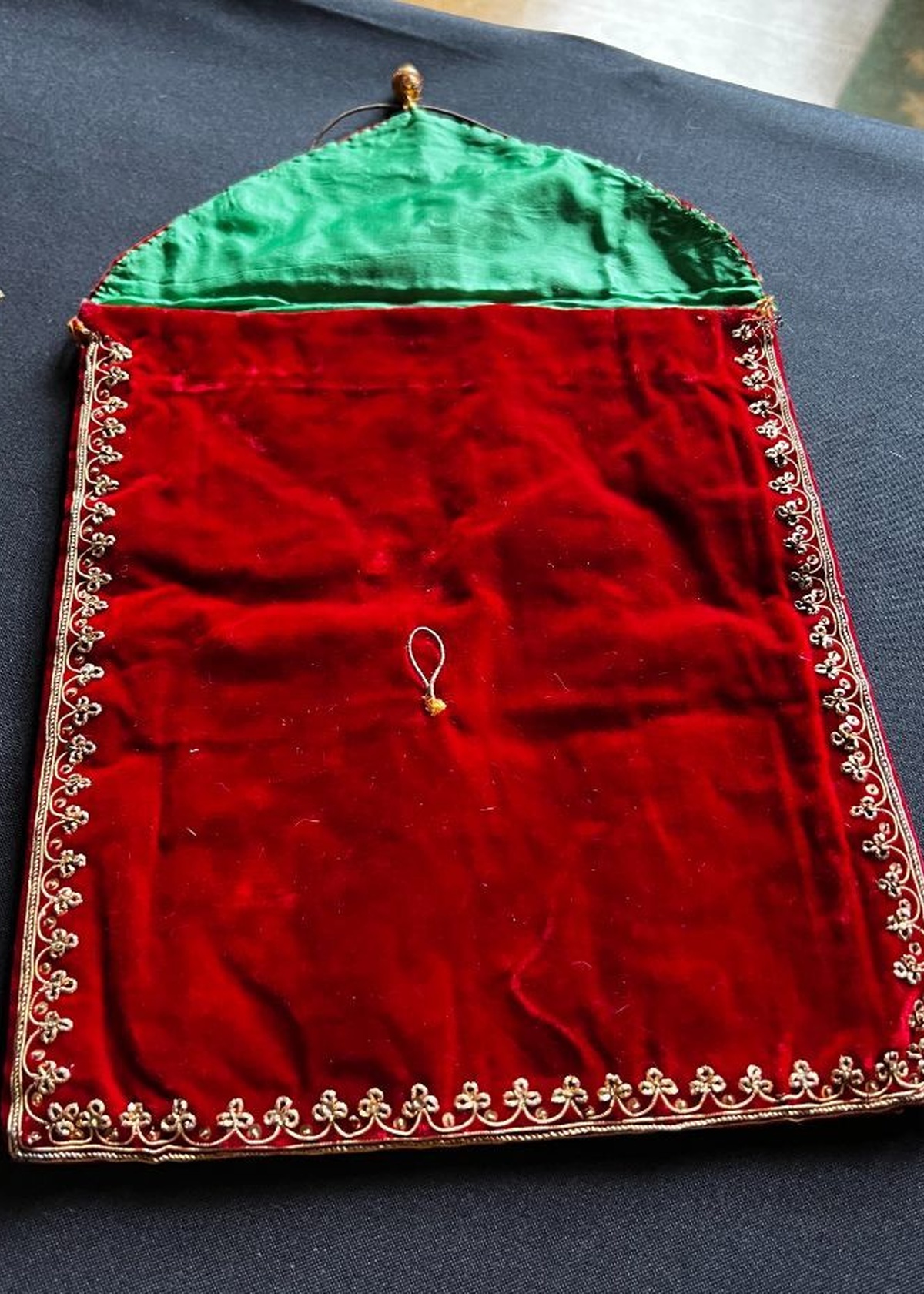 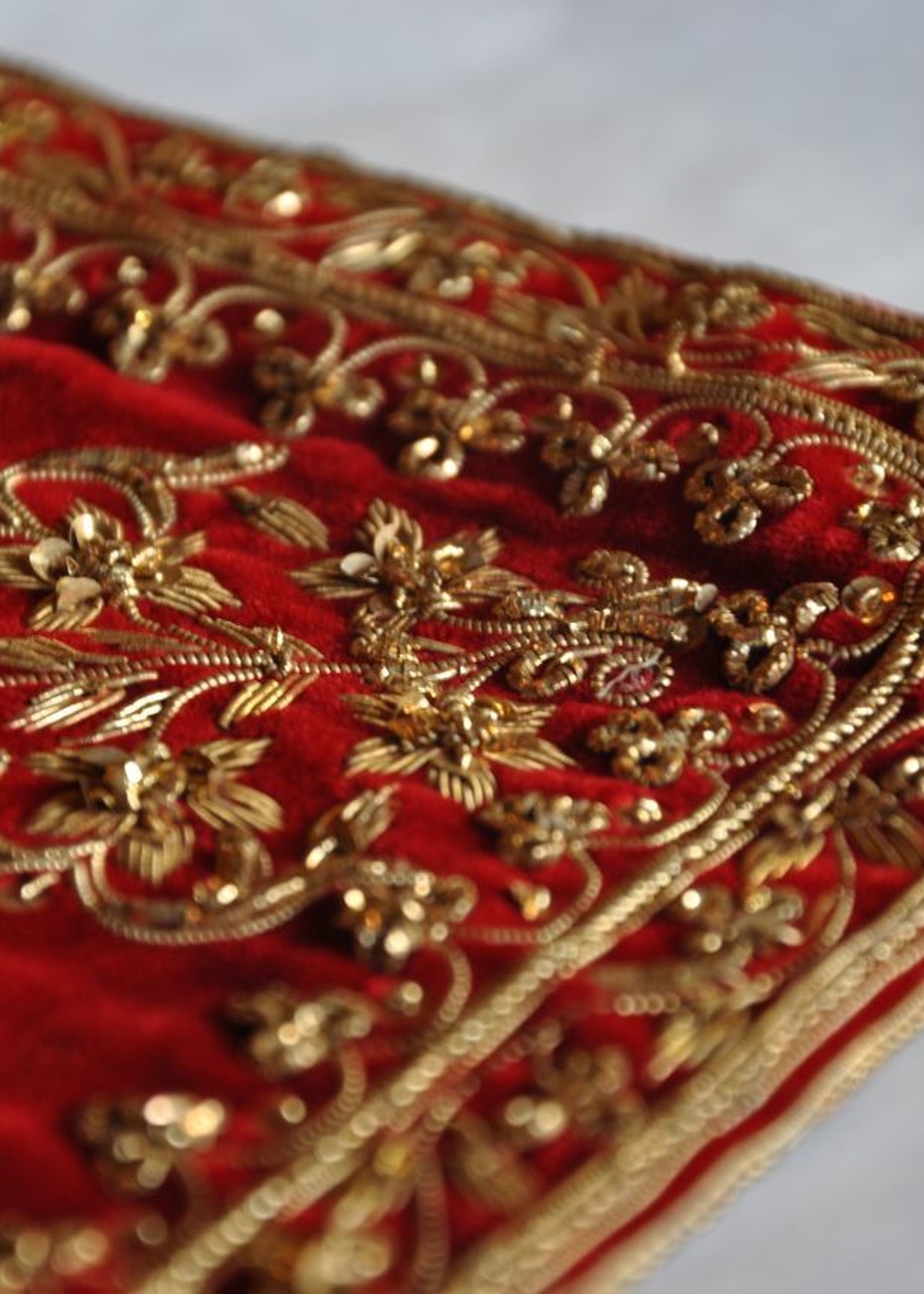 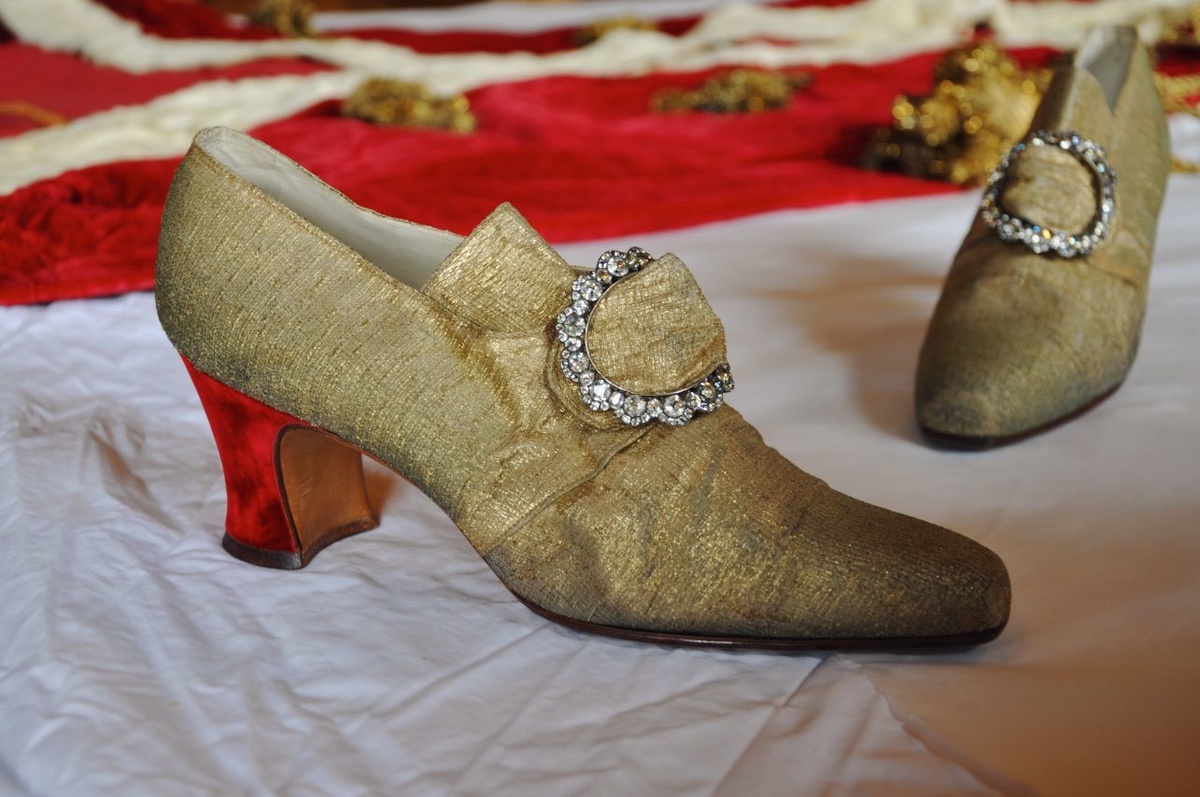 Who wore the robes?

We can piece together parts of the family’s history by exploring the portraits and archives at Mount Stuart. The robes were recorded to have been made for Mary, Countess of Bute, the wife of the 3rd Earl of Bute. They were worn in 1761 for the coronation of George III in Westminster Abbey. After Mary, the robes are shown in multiple portraits at Mount Stuart. 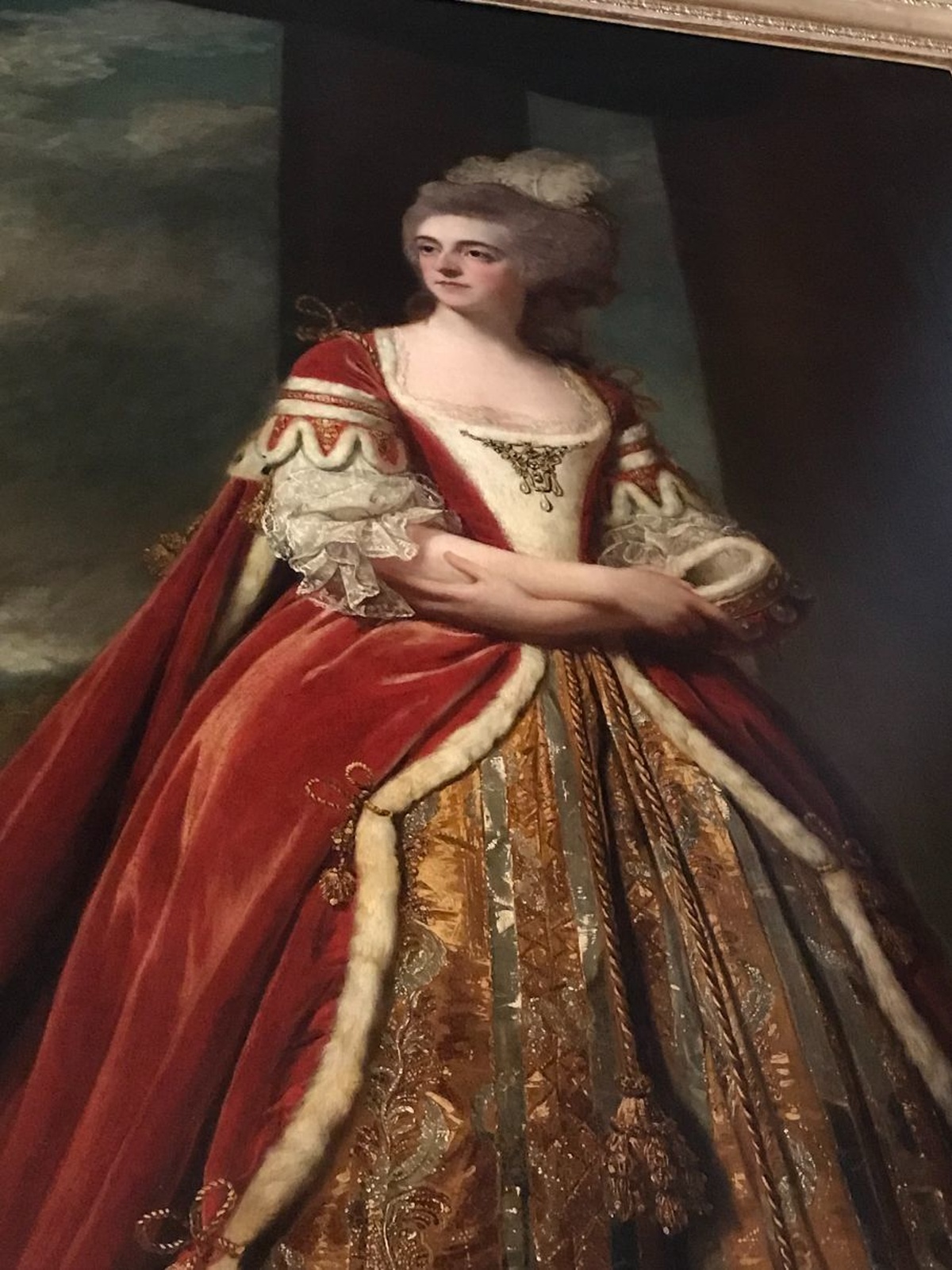 Frances, 1st Marchioness of Bute (d.1832), and second wife of the 1st Marquess of Bute, was also painted in the robes. Frances was painted by Sir Thomas Lawrence on an unknown date. Both of the 1st Marquess’s wives were painted in the coronation robes even though there were no coronations for them to attend. This indicates that the robes were a symbol of status, and it was important for the family to demonstrate their rank within the peerage. The portraits of the marchionesses in their coronation robes equally projected their status even without attending a coronation.

Gwendolen, 3rd Marchioness of Bute (1853-1932), the wife of the 3rd Marquess of Bute, was the next known marchioness to don the robes. Gwendolen wore them for special occasions. She was photographed wearing the robes in 1902 for the 4th Marquess’s twenty-first birthday celebrations. She was then painted from the photograph posthumously by James Gunn in 1936. The portrait of Gwendolen in the robes is part of a set, the 3rd Marquess was also posthumously painted in ceremonial dress by James Gunn. 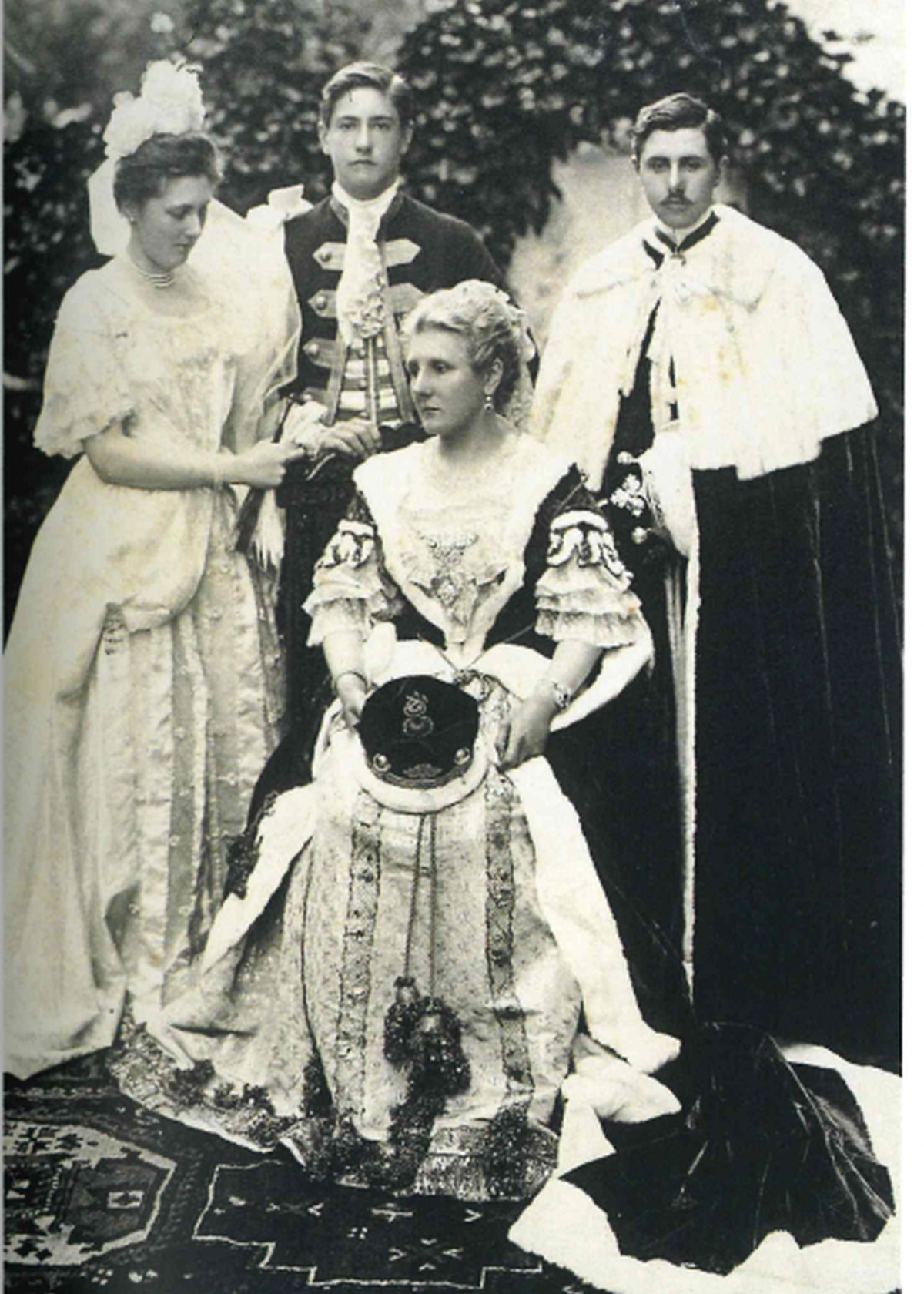 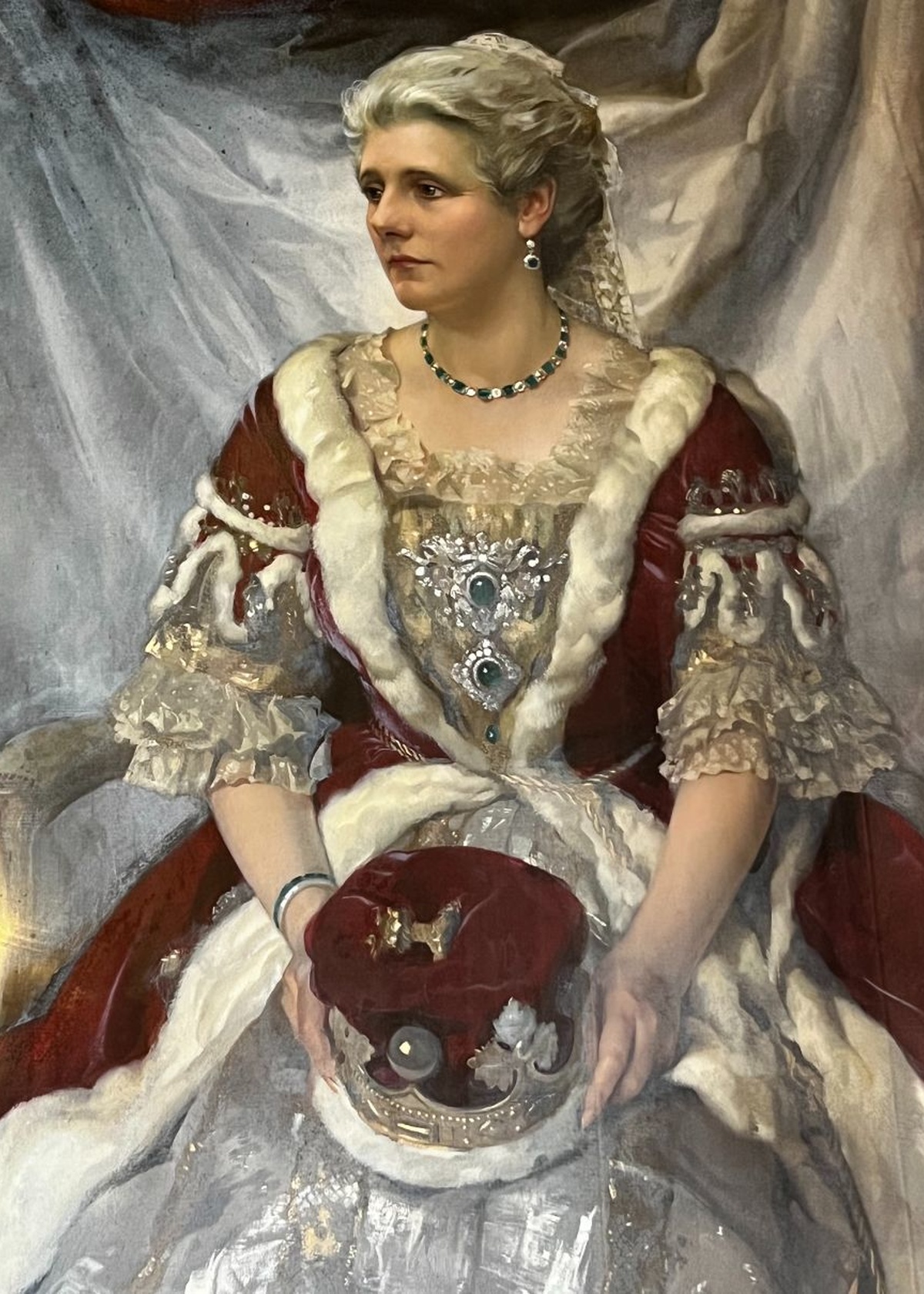 Augusta, 4th Marchioness of Bute (1880-1947), the wife of the 4th Marquess of Bute was the last known marchioness to wear the robes. She wore them to the coronation of George VI on May 12th, 1937. She was painted by James MacBey in 1939 wearing the robes. Augusta was also painted by an unknown artist in robes. The 1937 family Christmas card featured a picture of the 4th Marquess and Marchioness on coronation day, specifically stating that the robes they were wearing are “176 years old.” 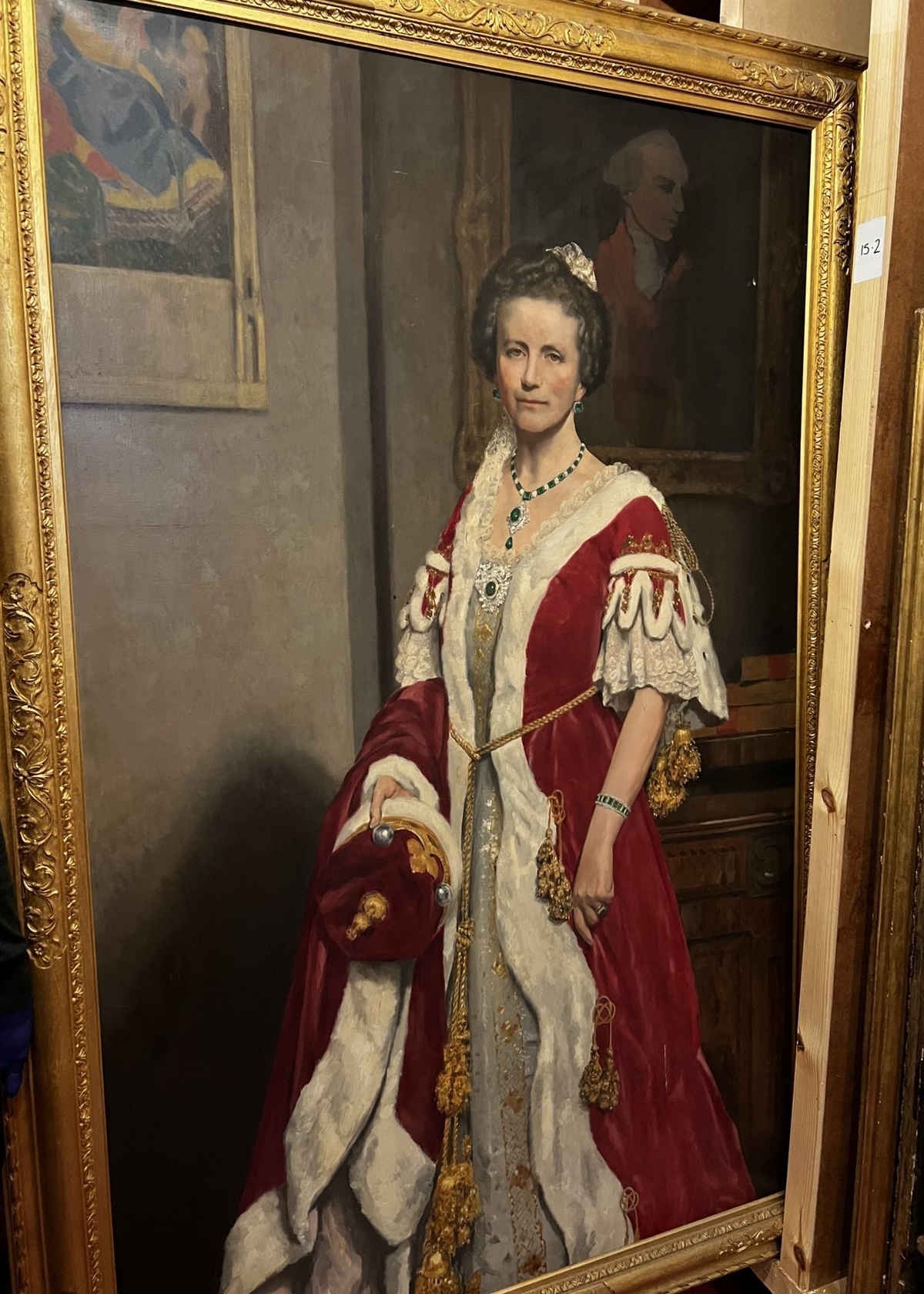 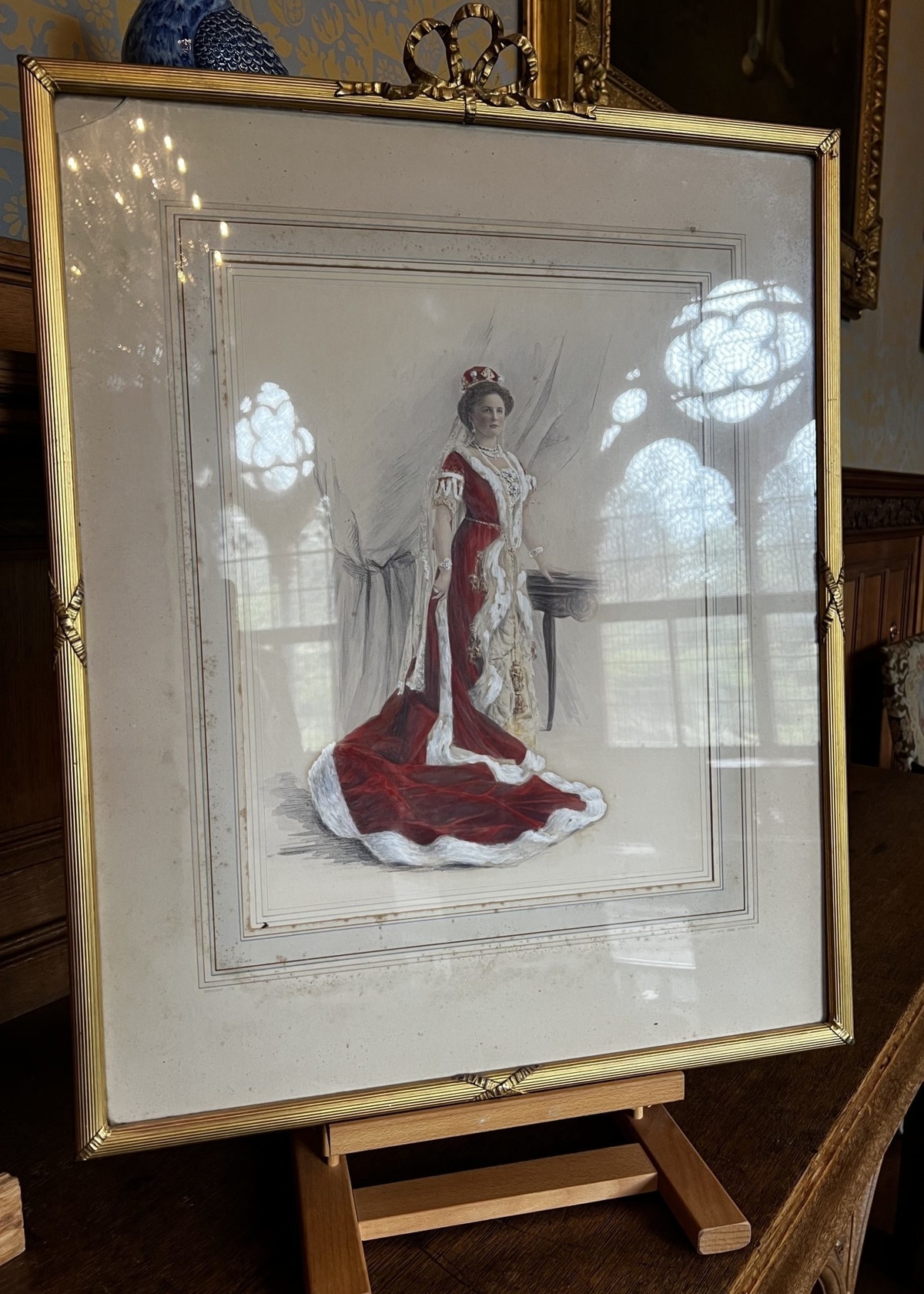 The Bute family collection also includes jewellery worn by both Gwendolen and Augusta. The jewellery is shown beautifully in both portraits and photographs. The emerald and diamond set can be worn multiple ways. A stunning emerald and diamond brooch is featured in both portraits. When worn by Gwendolen, a smaller matching brooch is dangled from the larger brooch on the bodice. Augusta chose to wear the smaller brooch as a pendant for her portrait and the larger brooch as a part of a tiara on coronation day. 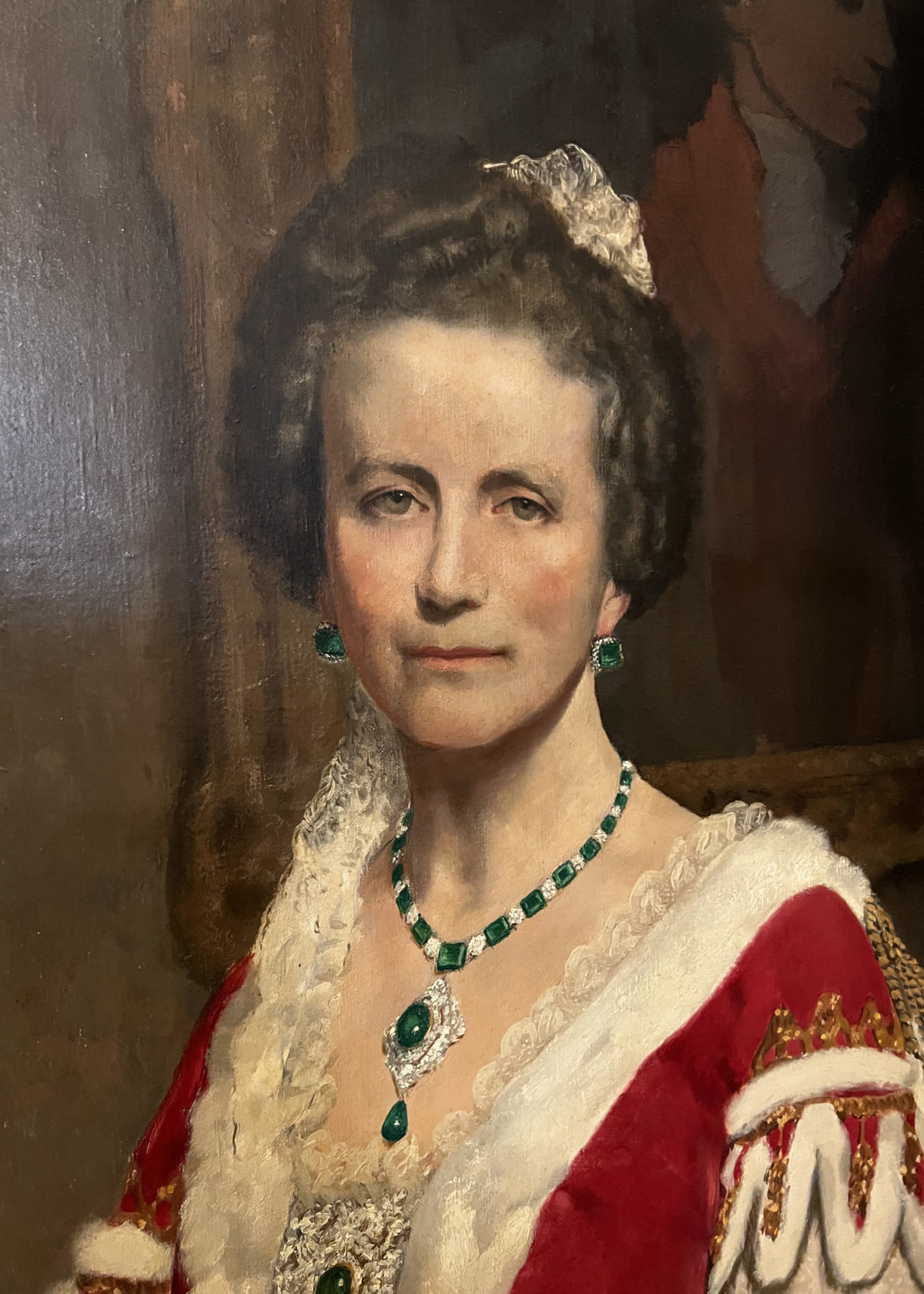 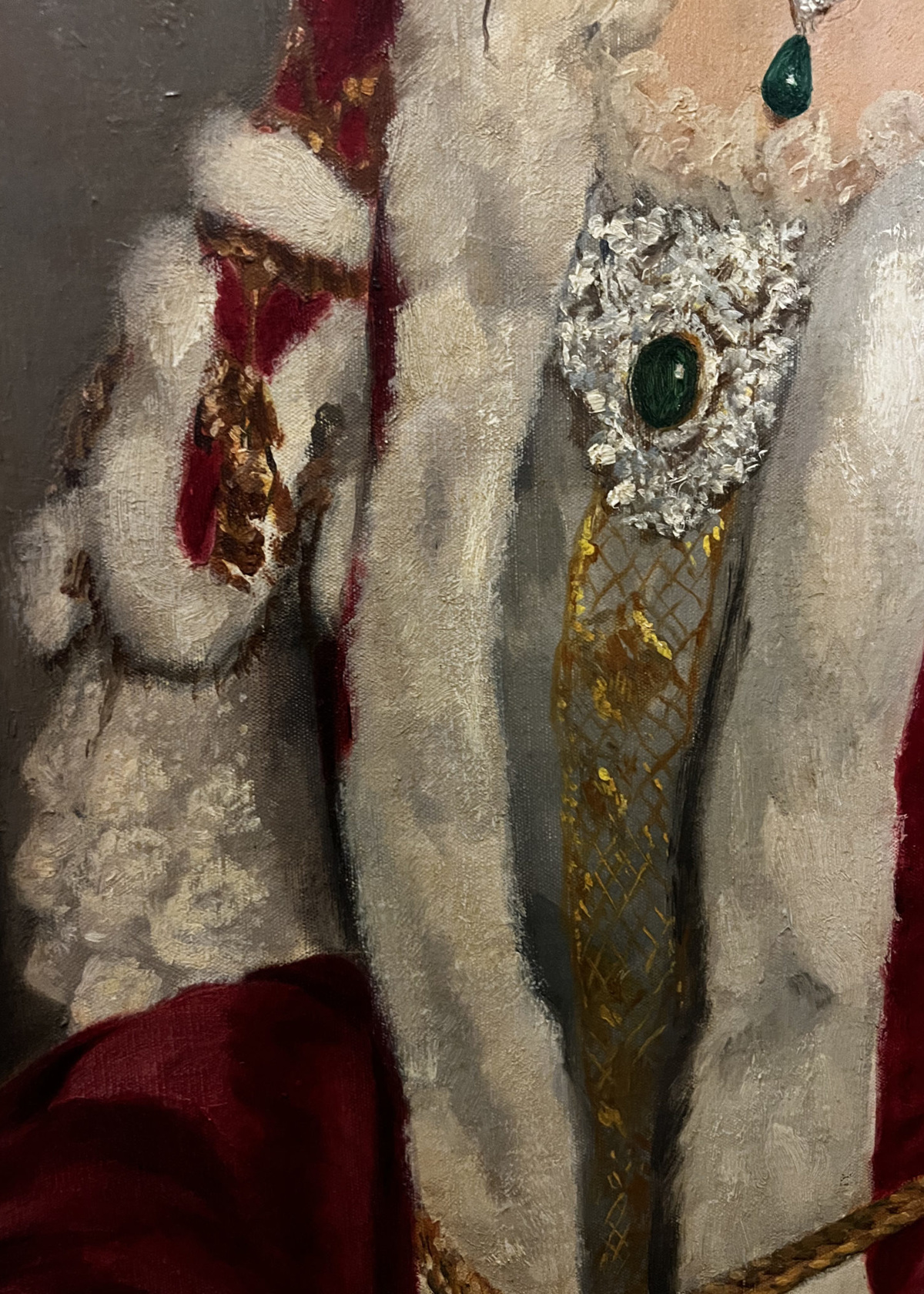 The portraits of the marchionesses give the coronation robes life. We can see how they were worn and how the robes changed over time. We must consider that these images rely on the artist who is painting them. A painter’s perspective can embellish or alter reality. However, since the Bute collection holds the extant garments, we can compare for more insight. The sleeves on the kirtle have changed over time. Embellishments and lace have been added. We can clearly see the lace pattern in both Gwendolen’s and Augusta’s portraits. 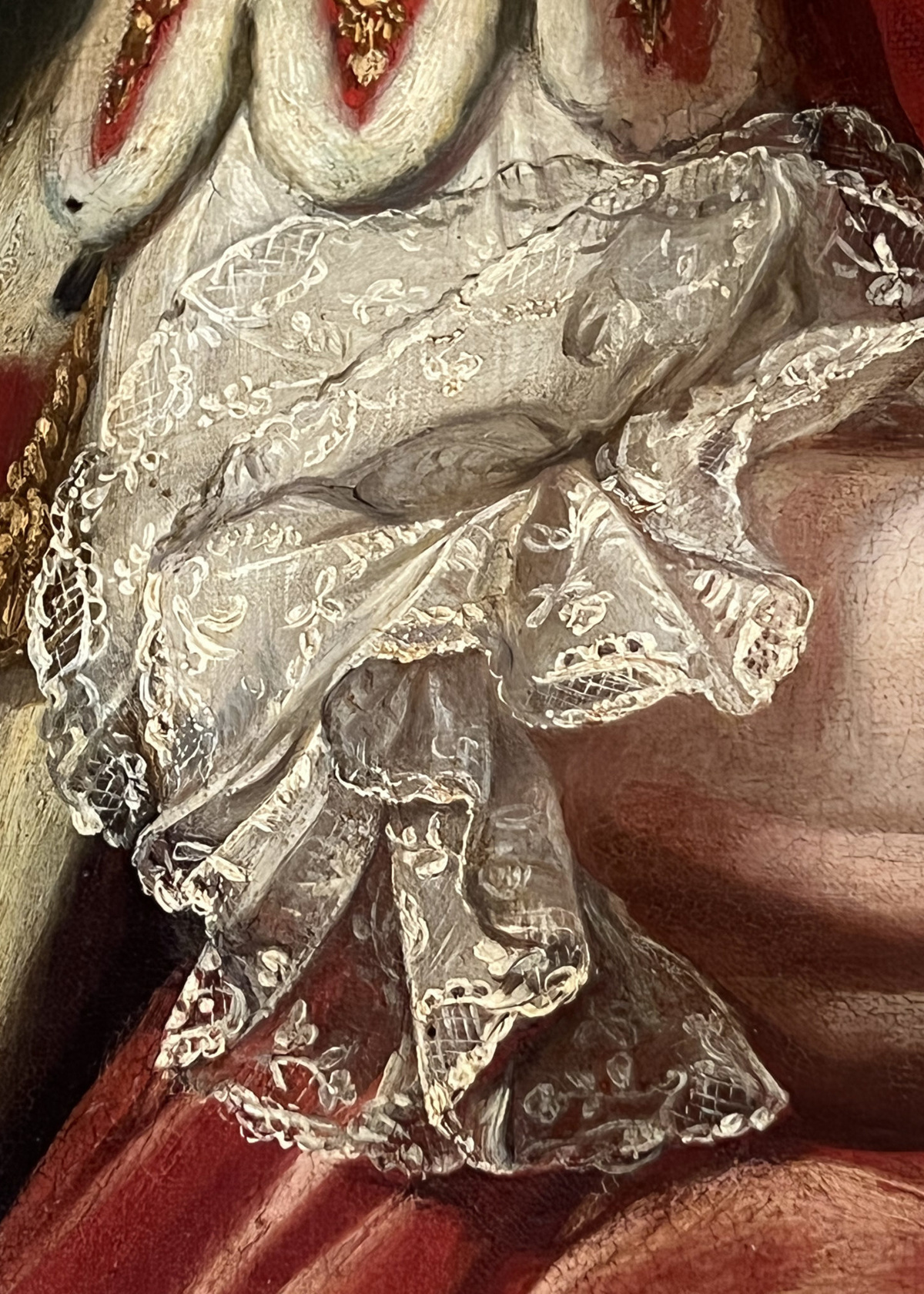 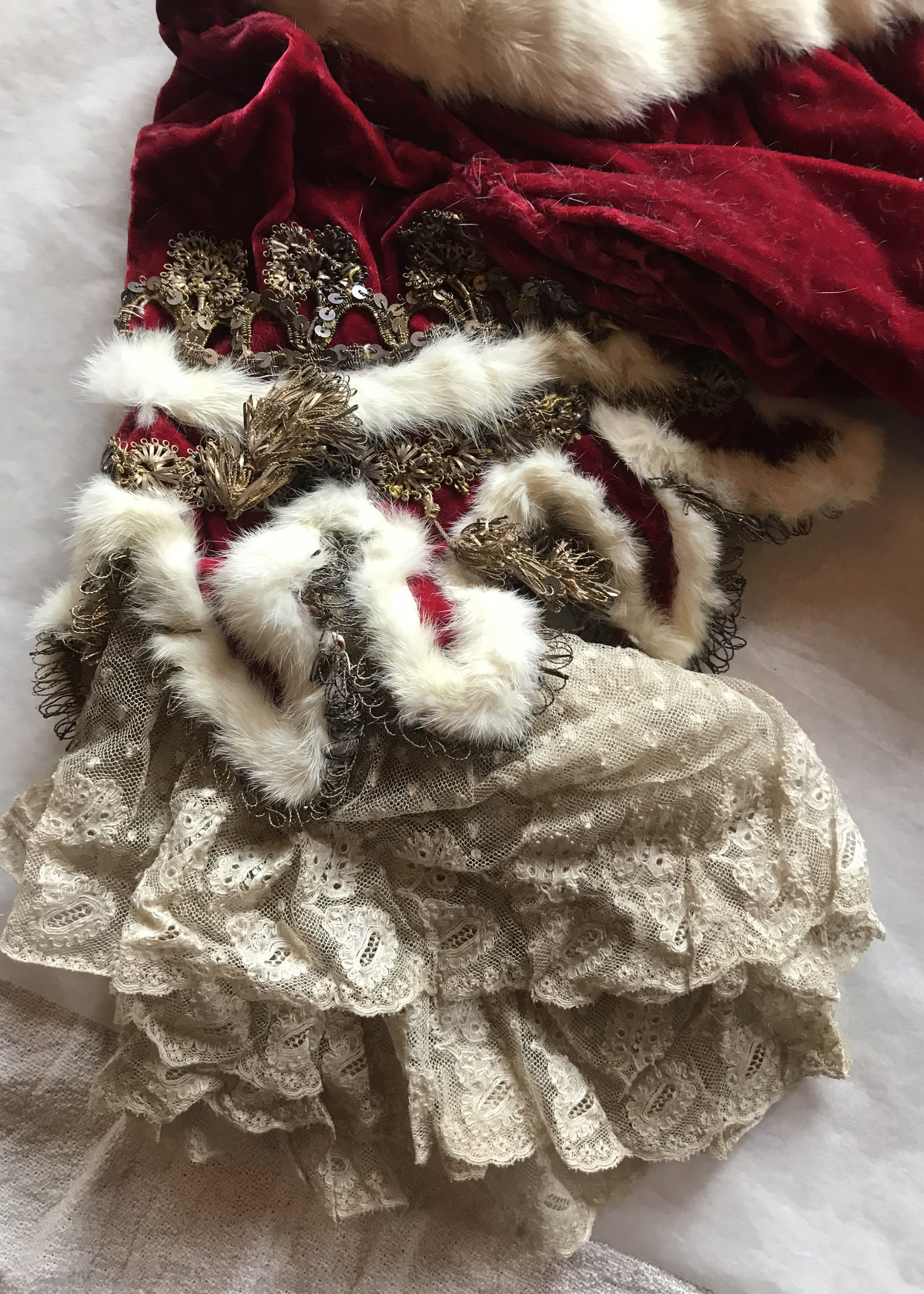 Mount Stuart holds an important part of dress history. When walking through the halls, the portraits convey the importance of ceremonial dress. There is a display of status and tradition that has been passed down through generations. The coronation robes are a fantastic way to explore the women of the Bute family and their role in history.