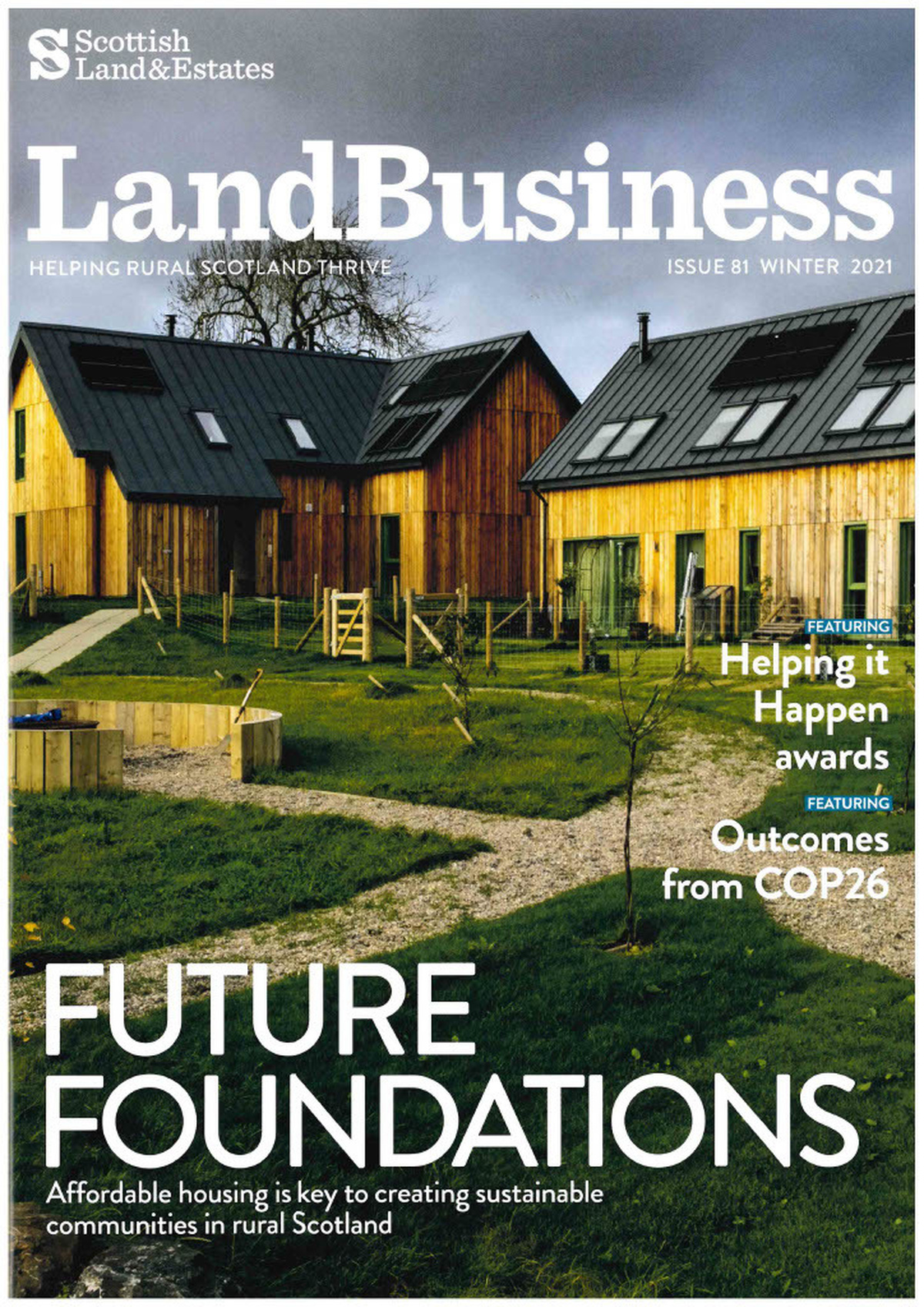 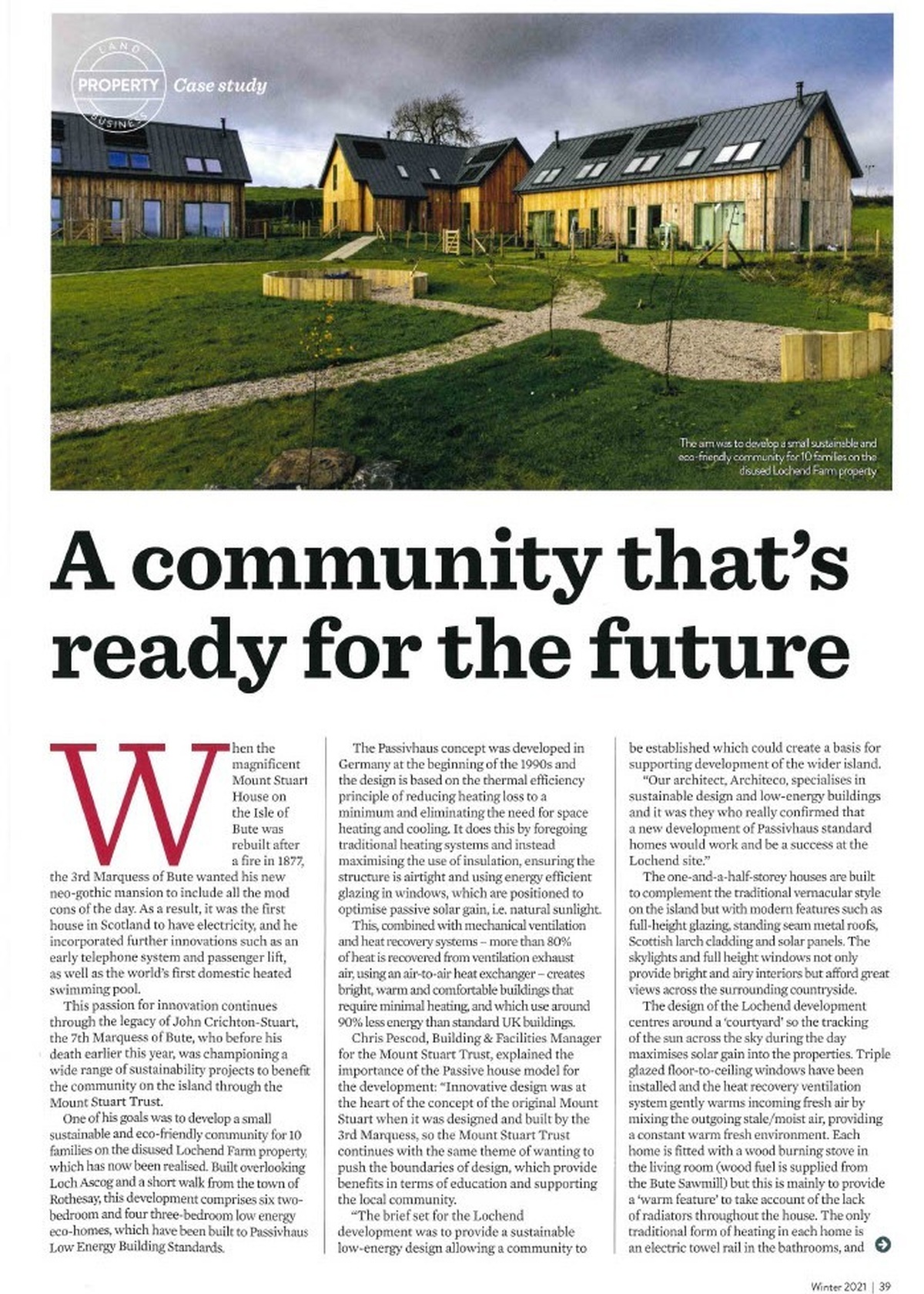 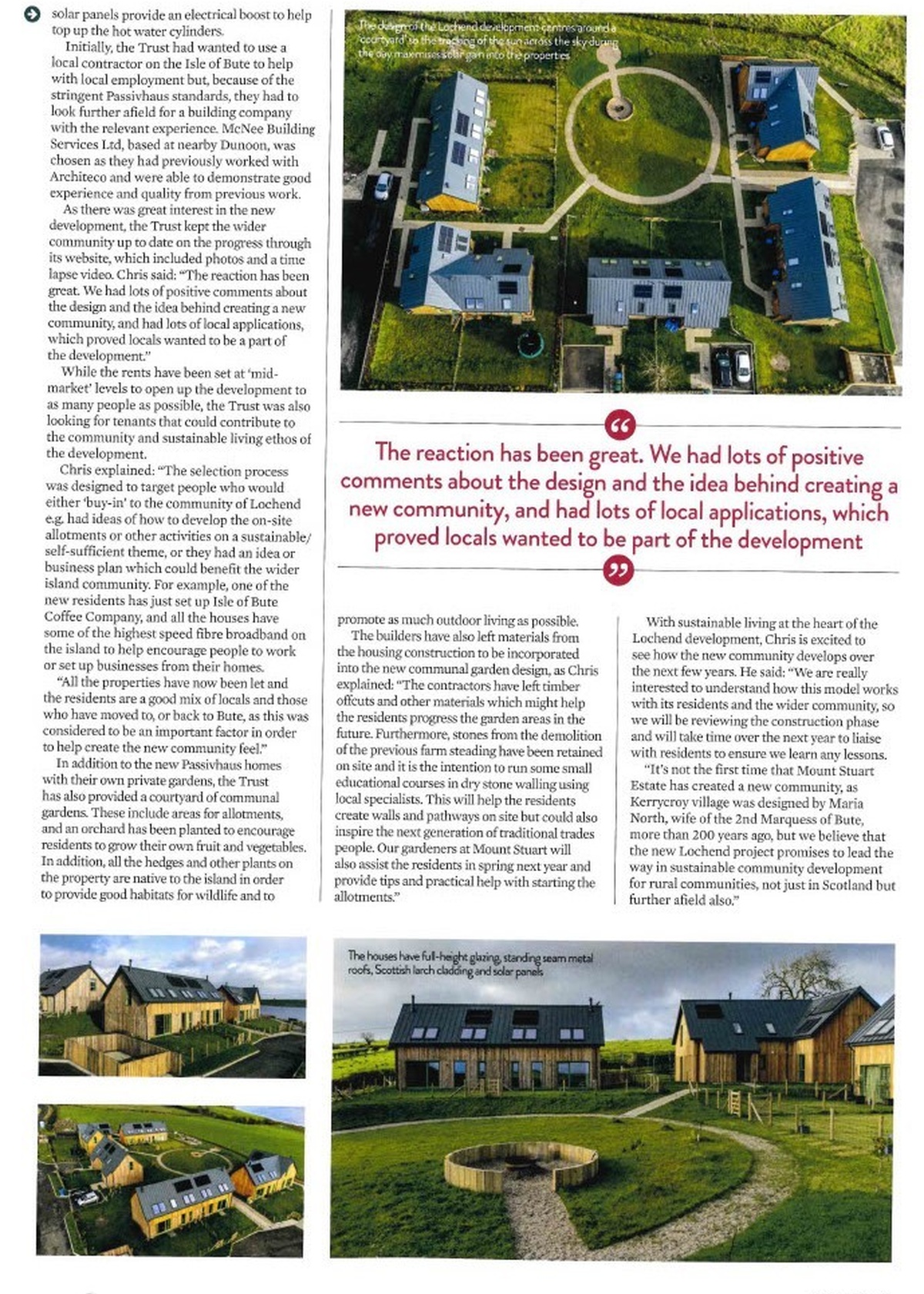 When the magnificent Mount Stuart House on the Isle of Bute was rebuilt after a fire in 1877, the 3rd Marquess of Bute wanted his new neo-gothic mansion to include all the mod cons of the day. As a result, it was the first house in Scotland to have electricity, and he incorporated further innovations such an early telephone system and passenger lift, as well as the world’s first domestic heated swimming pool. This passion for innovation continues through the legacy of John Crichton-Stuart, the 7th Marquess of Bute, who before his death earlier this year, was championing a wide range of sustainability projects to benefit the community on the island through the Mount Stuart Trust. One of his goals was to develop a small sustainable and eco-friendly community for 10 families on the disused Lochend Farm property, which has now been realised. Built overlooking Loch Ascog and a short walk from the town of Rothesay, this development comprises six twobedroom and four three-bedroom low energy eco-homes, which have been built to Passivhaus Low Energy Building Standards.

The Passivhaus concept was developed in Germany at the beginning of the 1990s and the design is based on the thermal efficiency principle of reducing heating loss to a minimum and eliminating the need for space heating and cooling. It does this by foregoing traditional heating systems and instead maximising the use of insulation, ensuring the structure is airtight and using energy efficient glazing in windows, which are positioned to optimise passive solar gain, i.e. natural sunlight. This, combined with mechanical ventilation and heat recovery systems – more than 80% of heat is recovered from ventilation exhaust air, using an air-to-air heat exchanger – creates bright, warm and comfortable buildings that require minimal heating, and which use around 90% less energy than standard UK buildings.

Chris Pescod, Building & Facilities Manager for the Mount Stuart Trust, explained the importance of the Passive house model for the development: “Innovative design was at the heart of the concept of the original Mount Stuart when it was designed and built by the 3rd Marquess, so the Mount Stuart Trust continues with the same theme of wanting to push the boundaries of design, which provide benefits in terms of education and supporting the local community. “The brief set for the Lochend development was to provide a sustainable low-energy design allowing a community to be established which could create a basis for supporting development of the wider island. “Our architect, Architeco, specialises in sustainable design and low-energy buildings and it was they who really confirmed that a new development of Passivhaus standard homes would work and be a success at the Lochend site.”

The one-and-a-half-storey houses are built to complement the traditional vernacular style on the island but with modern features such as full-height glazing, standing seam metal roofs, Scottish larch cladding and solar panels. The skylights and full height windows not only provide bright and airy interiors but afford great views across the surrounding countryside. The design of the Lochend development centres around a ‘courtyard’ so the tracking of the sun across the sky during the day maximises solar gain into the properties. Triple glazed floor-to-ceiling windows have been installed and the heat recovery ventilation system gently warms incoming fresh air by mixing the outgoing stale/moist air, providing a constant warm fresh environment. Each home is fitted with a wood burning stove in the living room (wood fuel is supplied from the Bute Sawmill) but this is mainly to provide a ‘warm feature’ to take account of the lack of radiators throughout the house. The only traditional form of heating in each home is an electric towel rail in the bathrooms, and solar panels provide an electrical boost to help top up the hot water cylinders.

Initially, the Trust had wanted to use a local contractor on the Isle of Bute to help with local employment but, because of the stringent Passivhaus standards, they had to look further afield for a building company with the relevant experience. McNee Building Services Ltd, based at nearby Dunoon, was chosen as they had previously worked with Architeco and were able to demonstrate good experience and quality from previous work. As there was great interest in the new development, the Trust kept the wider community up to date on the progress through its website, which included photos and a time lapse video.

Chris said: “The reaction has been great. We had lots of positive comments about the design and the idea behind creating a new community, and had lots of local applications, which proved locals wanted to be a part of the development.” While the rents have been set at ‘midmarket’ levels to open up the development to as many people as possible, the Trust was also looking for tenants that could contribute to the community and sustainable living ethos of the development. Chris explained: “The selection process was designed to target people who would either ‘buy-in’ to the community of Lochend e.g. had ideas of how to develop the on-site allotments or other activities on a sustainable/ self-sufficient theme, or they had an idea or business plan which could benefit the wider island community. For example, one of the new residents has just set up Isle of Bute Coffee Company, and all the houses have some of the highest speed fibre broadband on the island to help encourage people to work or set up businesses from their homes. “All the properties have now been let and the residents are a good mix of locals and those who have moved to, or back to Bute, as this was considered to be an important factor in order to help create the new community feel.”

In addition to the new Passivhaus homes with their own private gardens, the Trust has also provided a courtyard of communal gardens. These include areas for allotments, and an orchard has been planted to encourage residents to grow their own fruit and vegetables. In addition, all the hedges and other plants on the property are native to the island in order to provide good habitats for wildlife and to promote as much outdoor living as possible. The builders have also left materials from the housing construction to be incorporated into the new communal garden design, as Chris explained: “The contractors have left timber offcuts and other materials which might help the residents progress the garden areas in the future.

Furthermore, stones from the demolition of the previous farm steading have been retained on site and it is the intention to run some small educational courses in dry stone walling using local specialists. This will help the residents create walls and pathways on site but could also inspire the next generation of traditional trades people. Our gardeners at Mount Stuart will also assist the residents in spring next year and provide tips and practical help with starting the allotments.”

With sustainable living at the heart of the Lochend development, Chris is excited to see how the new community develops over the next few years. He said: “We are really interested to understand how this model works with its residents and the wider community, so we will be reviewing the construction phase and will take time over the next year to liaise with residents to ensure we learn any lessons. “It’s not the first time that Mount Stuart Estate has created a new community, as Kerrycroy village was designed by Maria North, wife of the 2nd Marquess of Bute, more than 200 years ago, but we believe that the new Lochend project promises to lead the way in sustainable community development for rural communities, not just in Scotland but further afield also.”

Contemporary Visual Arts: Look Ahead to 2022