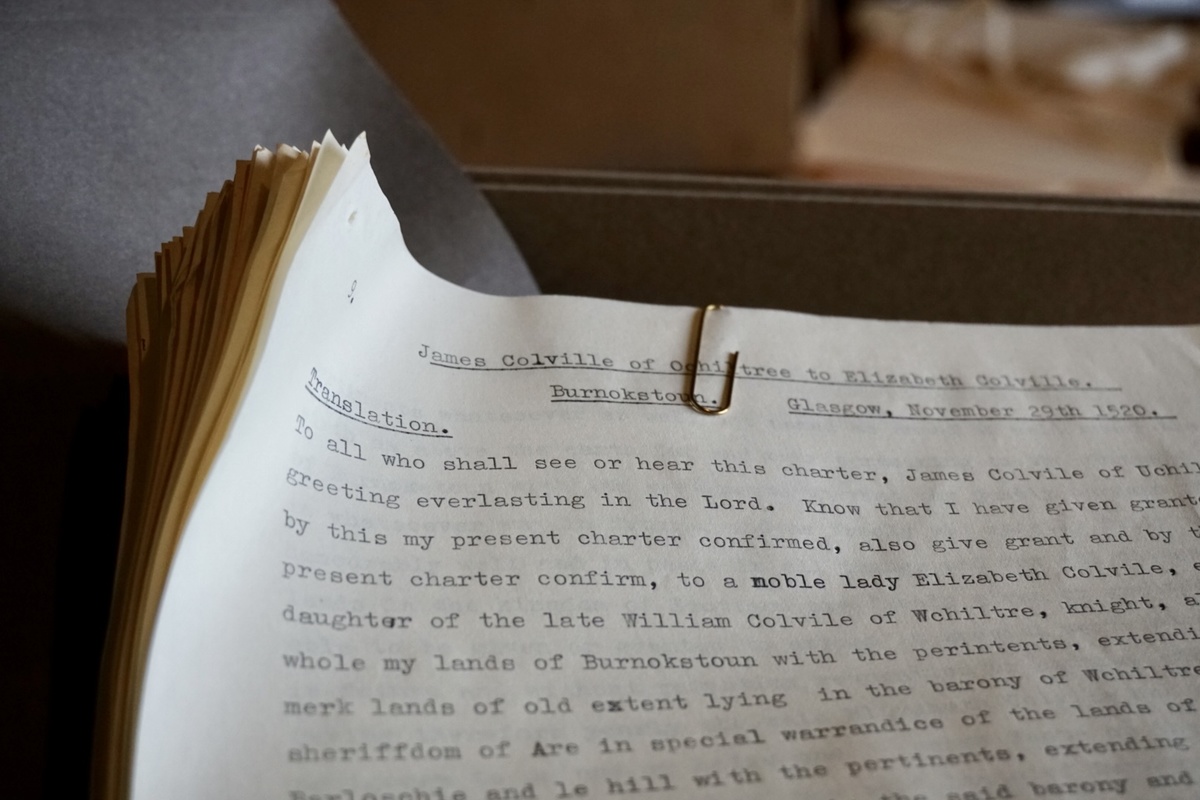 Mount Stuart Trust was delighted to host three wonderful students this Summer from the University of Dundee’s School of Humanities who came to undertake an archive cataloguing internship with the Bute Collection at Mount Stuart. Read on to find out how Valerie found her time cataloguing the Literary Papers of the 4th Marquess of Bute and the Papers of Eileen, 5th Marchioness of Bute. Watch this space for the final blog from our University of Dundee interns, detailing Connie's experience cataloguing the Archive of the Bute Collection at Mount Stuart.

Mount Stuart on the Isle of Bute is the family seat of the Marquesses of Bute, a family who can trace their ancestry back to Walter Fitz-Alan, Steward to King David I of Scotland (1124-1153). The original House on this site, commissioned in 1716, was gutted by fire in 1877, so Mount Stuart as it stands today was re-built by the 3rd Marquess in the fashionable Victorian Gothic style using red sandstone. Extensive grounds supplied the house with garden produce and flowers and indulged the Victorian passion for ferns and specimen trees.

Impressive from the exterior, the interior showcases the best in design, materials, architecture, and decoration which reflect the interests, style, and wit of the 3rd Marquess. The Marble Hall with its expanses of Italian marble and majestic stained-glass windows together with the red stained-glass in the Chapel that send an intense radiance across the marble floors, columns, and altar are breath-taking. However, there is an equally fascinating side to Mount Stuart to be found in the Archives. 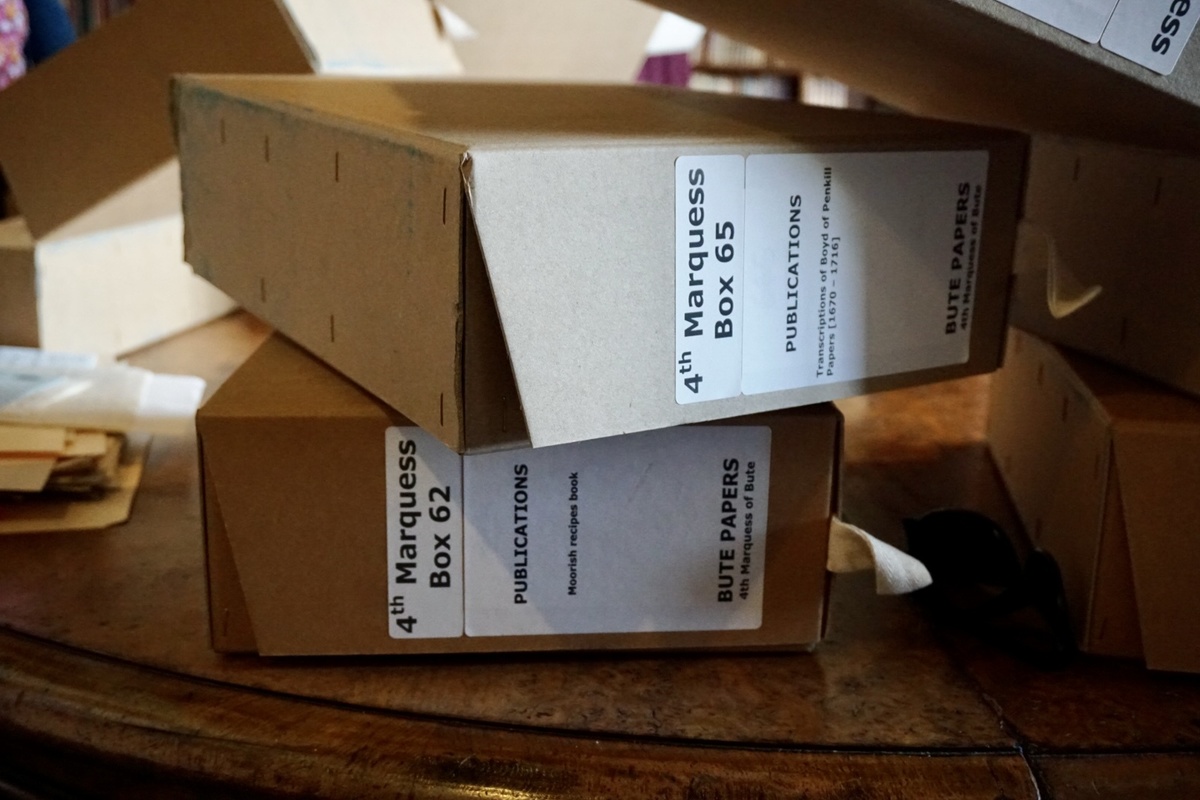 The opportunity to work for two weeks with Archivist, Lynsey Nairn, in the Archives of the Bute Collection at Mount Stuart arose from an initiative between the Centre for Scotland’s Land Futures at the University of Dundee and the Mount Stuart Trust. Lynsey is responsible for over 3,500 boxes of archive material, approximately half of which has been catalogued. The Archive contains, amongst other things, estate records, personal correspondence, receipts, designs, drawings, and plans for the re-building of Mount Stuart and other Bute family properties.

My interest lay in the publications of the 4th Marquess, John Crichton-Stuart (1881-1947). The 4th Marquess enjoyed travelling, making his first visit to Morocco in 1899. The first box I examined contained handwritten notes of ingredients, spices, and recipes for his book Moorish Recipes published posthumously in 1954. These notes, some on scraps of paper, had been carefully transferred into exercise books, then typewritten as manuscripts for the publishers Oliver and Boyd, of Edinburgh to create printer’s proofs. There were also black and white photographs of a Moorish dining table and Moorish cooking pots. These photographs were used by the artist Mangin to produce pen and ink illustrations for the book. 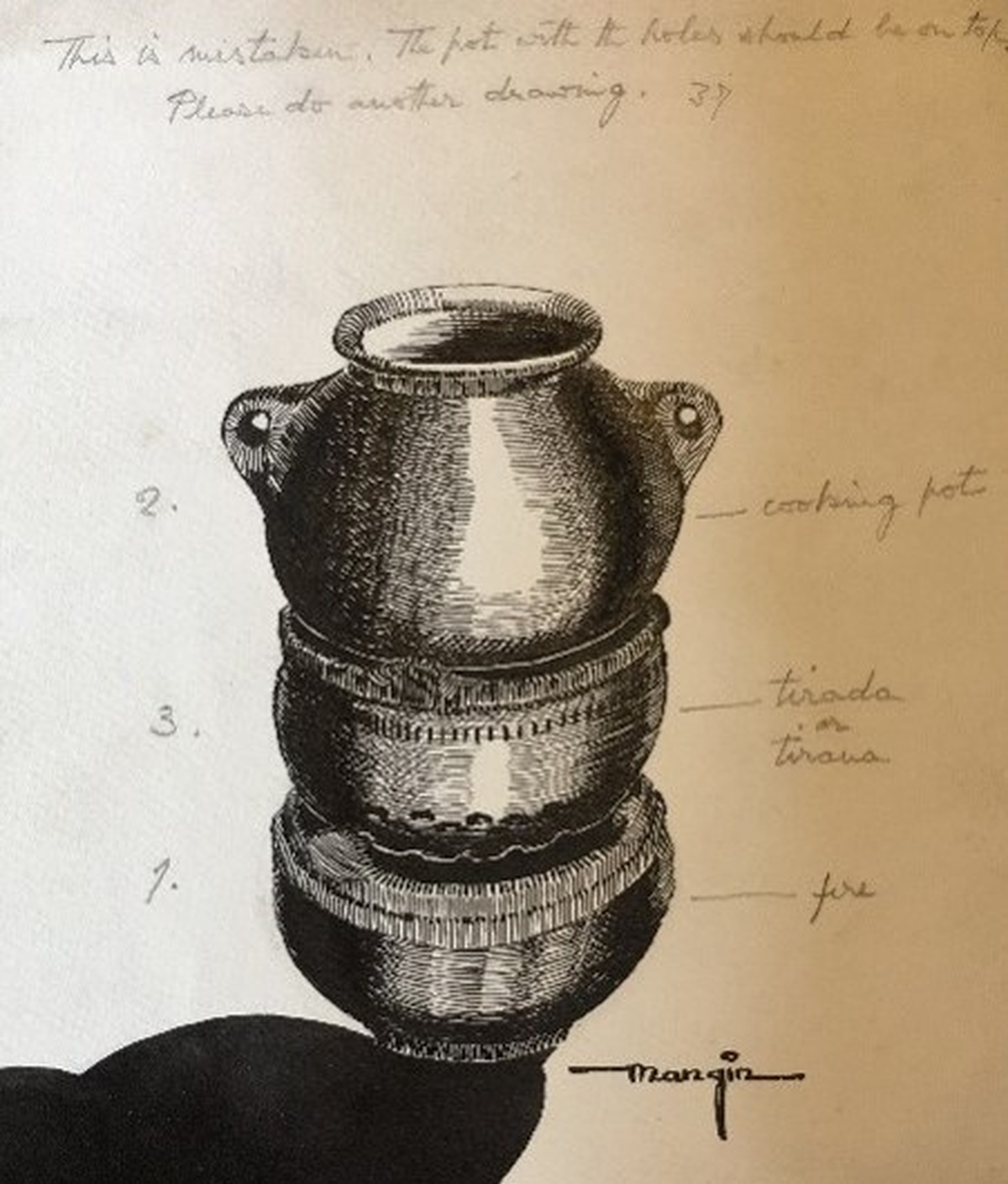 Whilst the idea of eating couscous or cooking with a Tagine may seem ordinary to us today, at the time these would have been new and exciting experiences. The most exotic recipe was for Locust Bread, a dish which could only be created once every nine years or so following, literally, a ‘plague’ of locusts! 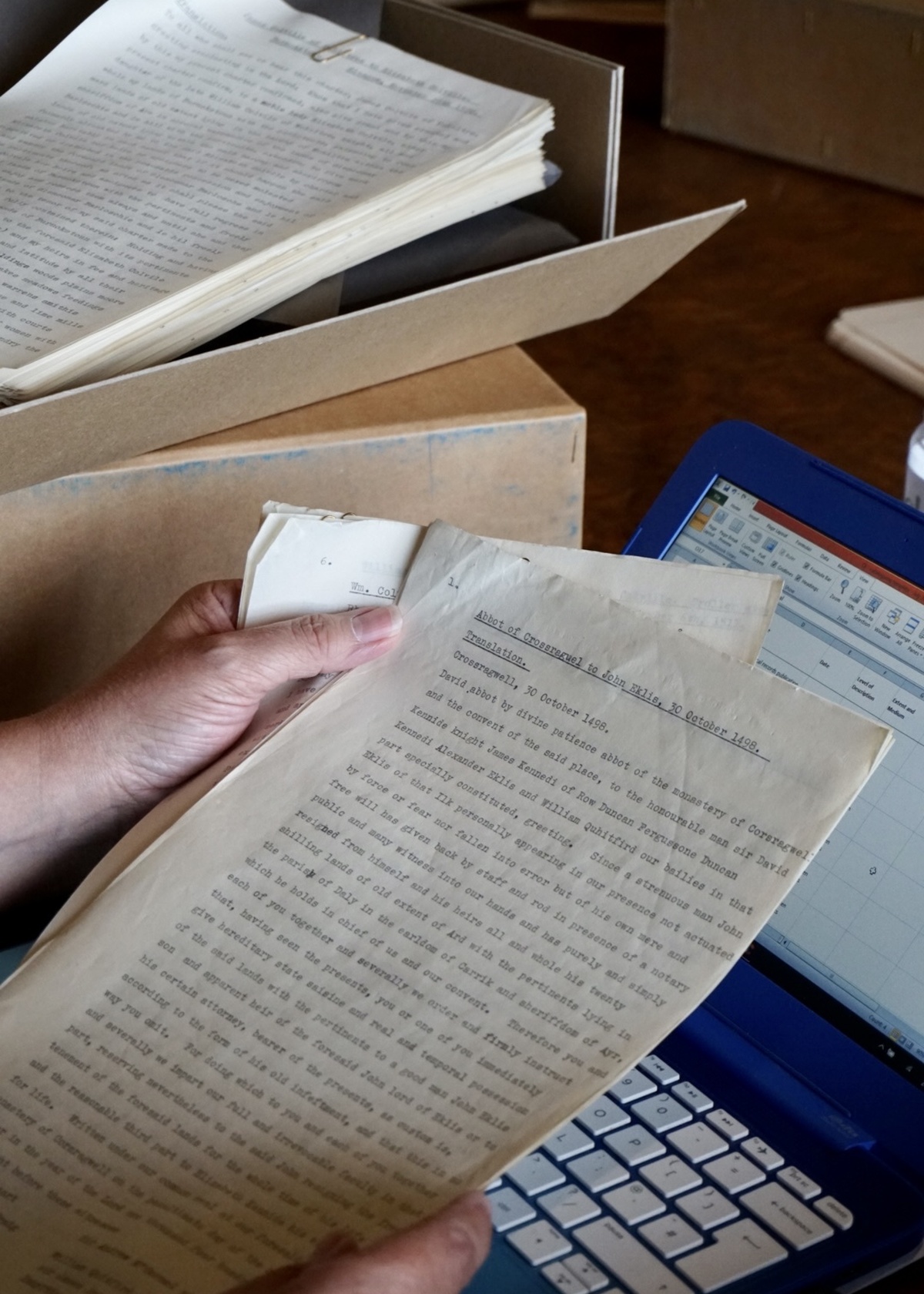 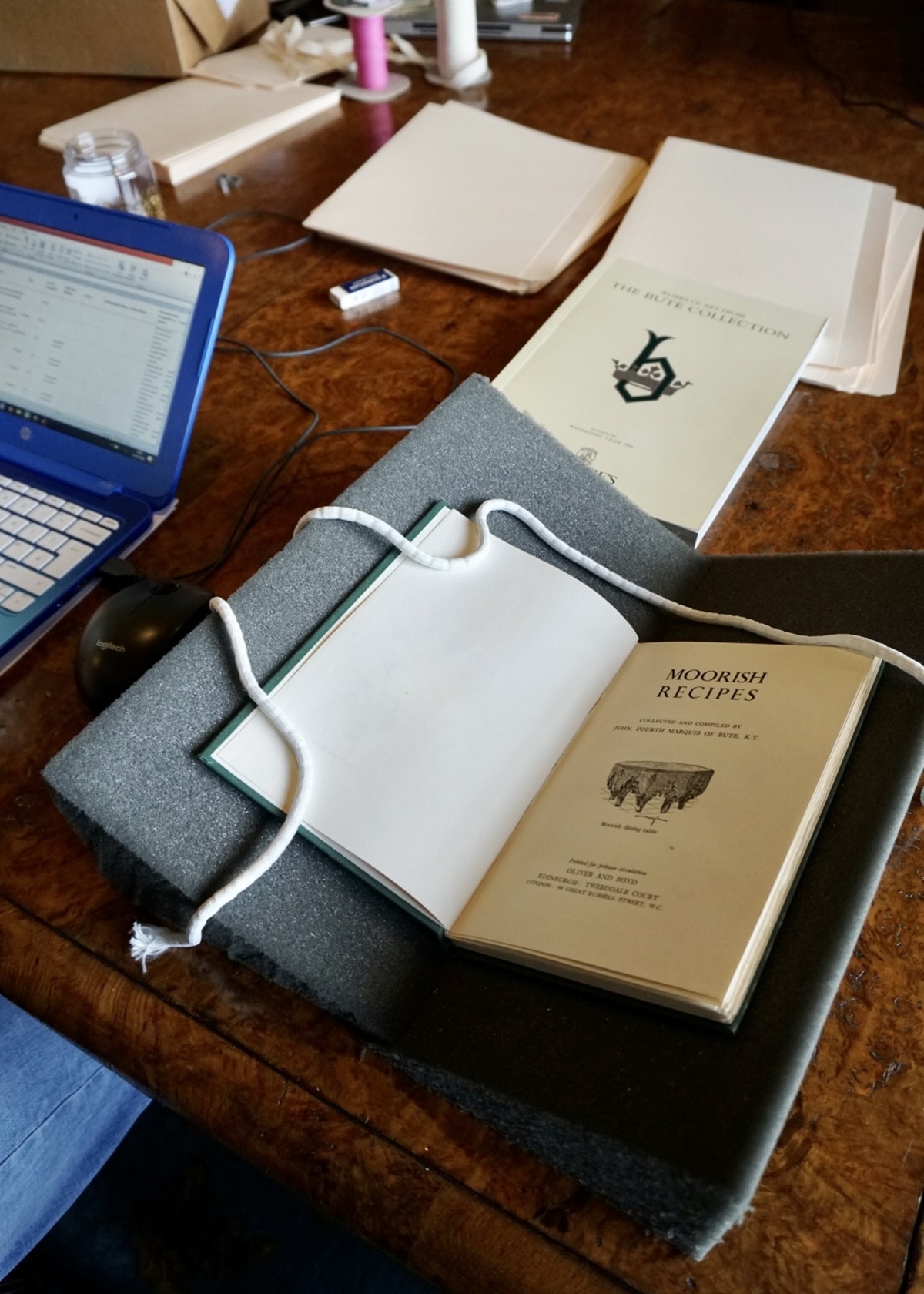 Moorish Recipes was published privately by his sons and given as gifts to family and friends. All these items were contained in a single archive box and demonstrate the process and determination required to translate a passion into print.

The 4th Marquess was also interested in Scottish history and undertook to transcribe the parish records and court sessions of several Scottish parishes, including Rothesay, Penninghame, and Kirkcudbright. A black and white photograph taken in 1934 of the Sheriff Court papers and documents as stored in the loft of the Court House Kirkcudbright show the extent of his task. 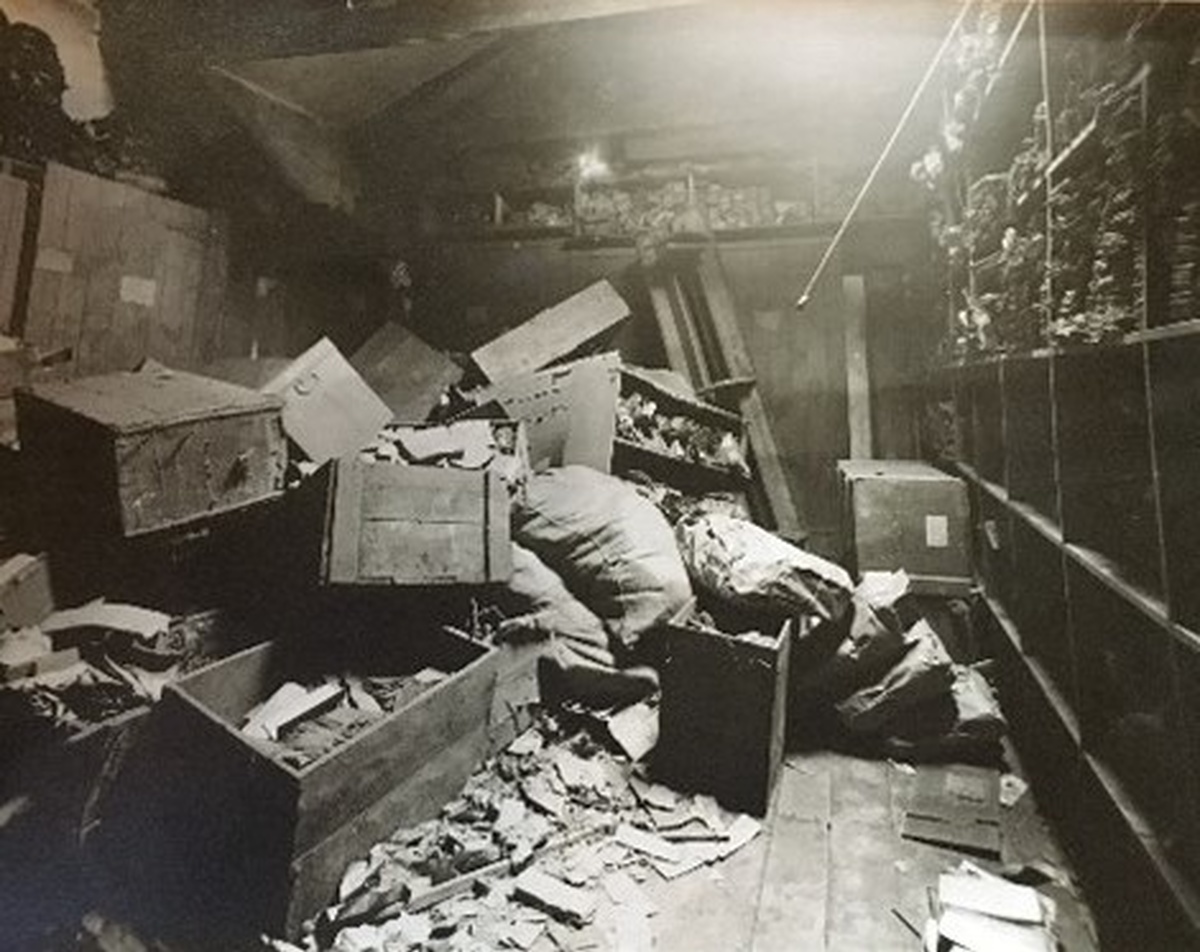 Loft of the Sheriff Court House, Kirkcudbright (1934). The Bute Collection at Mount Stuart.

Nevertheless, with the assistance of Miss Catherine Armet, then-Bute family Archivist, and a team of palaeographers who converted the records into modern English, the 4th Marquess published a sixteen-volume series of these records dating from 1569 to 1766. Several complete copies of the series are held in the Libraries of the Bute Collection at Mount Stuart, the National Library of Scotland, and several universities hold individual volumes. It is of great historical importance for academics, scholars, and historians today.

The final box I catalogued were the personal papers of Lady Eileen, Countess of Dumfries, later the 5th Marchioness of Bute. These papers included newspaper cuttings of her engagement, personal correspondence from friends and her husband John, Earl of Dumfries, as well as school reports and letters from her sons whilst at boarding school. The letters from her husband date from 1931, prior to their engagement, through to 1946 including his naval service in World War II and demonstrate his deep and long-lasting love. At the start of the Second World War, Lady Eileen and three other women of the household completed a course of Red Cross training, and her Certificate dated 30 October 1939 is within this box. There are also letters dated June 1934 to 1935 from her husband on his visits to the island of St Kilda, which he purchased in 1931 to be preserved as a bird sanctuary. Much is written and documented concerning the lives of the male members of families, particularly the aristocracy, so it is valuable to also catalogue women’s lives. 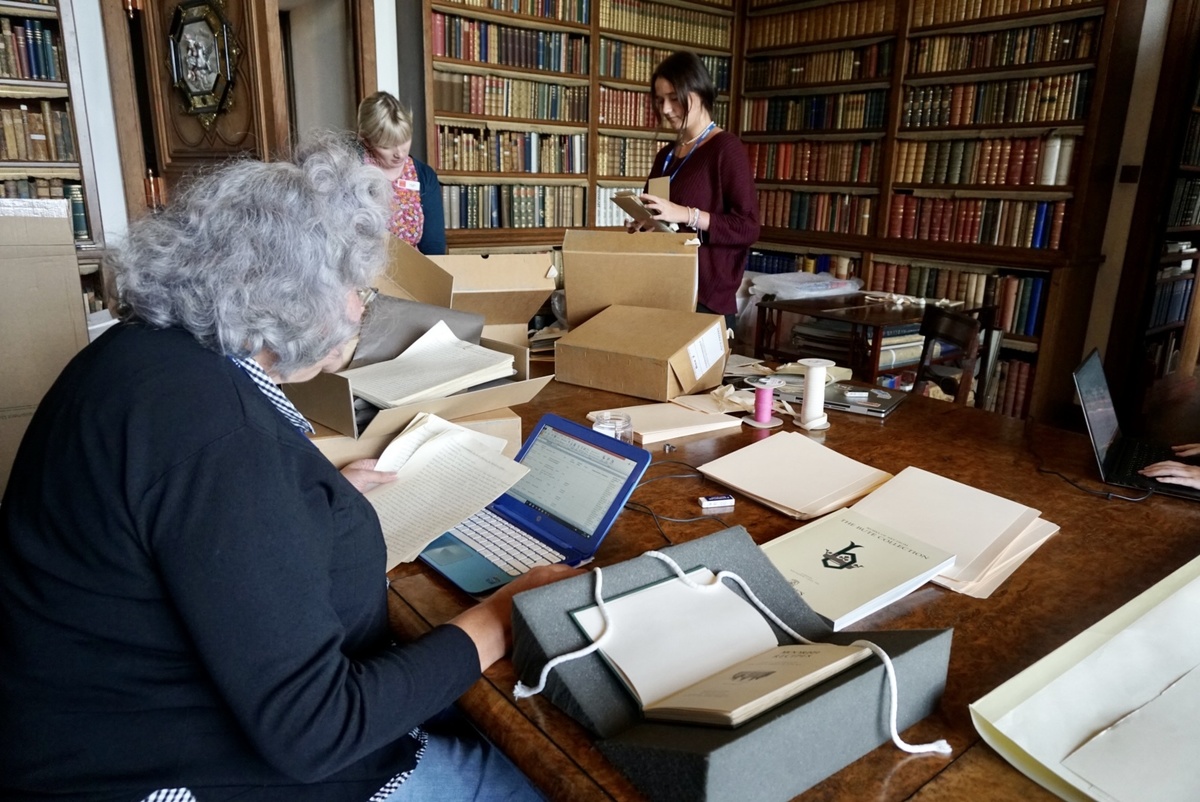 Whilst archives have traditionally been the preserve of scholars and academics, the Mount Stuart Trust is energetic in its mission to share the Bute Collection at Mount Stuart with the wider public demonstrating how valuable and inspirational the use of archive material can be. My thanks go to the Collections Team: Lynsey Nairn, Archivist, Elizabeth Ingham, Librarian, and Jessica Insley, Curator. It has been a pleasure and a privilege to have played a small part in the cataloguing of this archive.