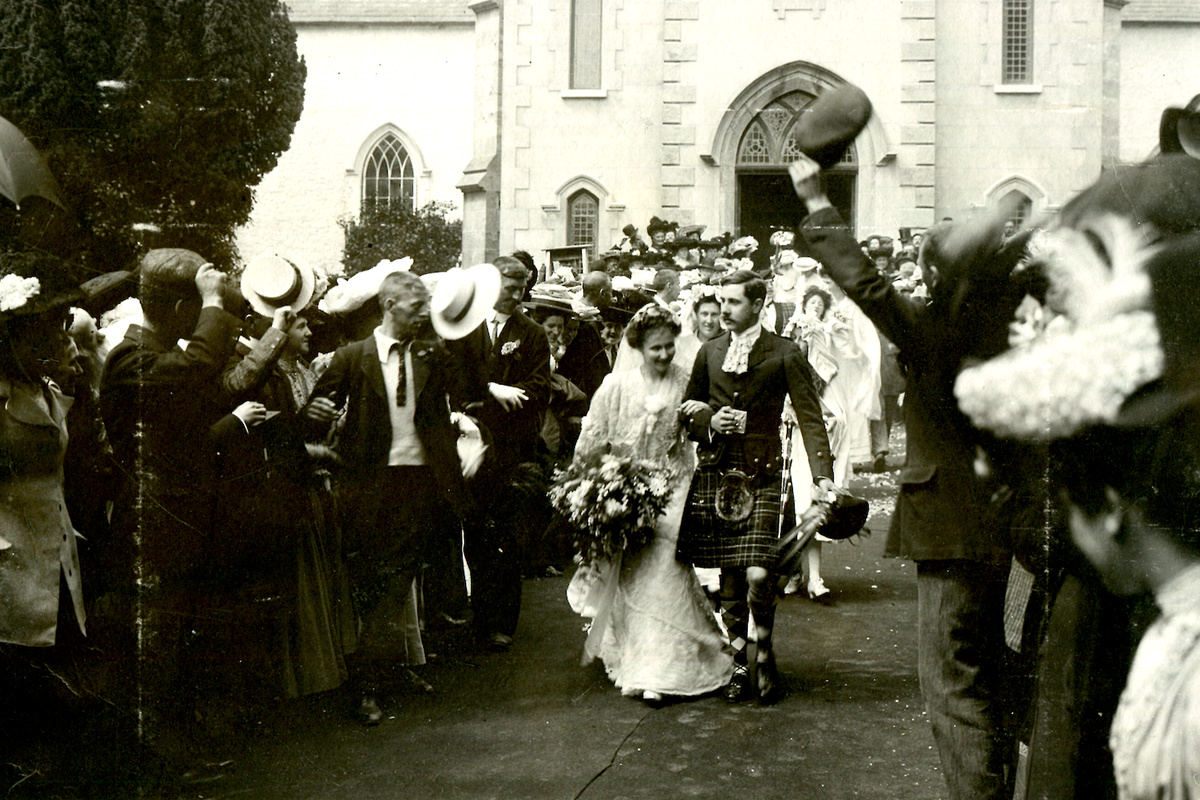 The 29th July 2021 marks 18 years since the wedding film of the 4th Marquess of Bute was discovered in a small attic space at Mount Stuart. Read on to find out more about the pioneering film from our Archivist, Lynsey.

In April 2003, I was appointed Collections Assistant and started working with the Bute Collection at Mount Stuart. My task at that time was to update the collections management database, photograph the collections on site, and add any useful information about the fascinating items I found.

This project gave me access to every cupboard, room and store in the House and I found myself not only becoming engrossed in the contents of the rooms, but by the rooms themselves, as there were many I hadn’t seen before. Room by room, I cross-referenced each item on the database against an early list I had been given, noted down anything not on the list, and took photographs to attach to their digital files later.

By July, I had been through many incredible rooms, and turned my attention to the Pulpit Attic. This is a small attic space of three open-plan rooms with wooden floors and beams just underneath a slate roof, which housed - along with a quantity of miscellaneous items - a number of old wooden tea-chests, part of an old staircase, copper pots and jelly-moulds.

When it came to the wooden tea chests, there were several, and all full with different items. One contained printed abstracts of meteorological observations by the Archaeological and Physical Society of Bute from 1901 and The Rothesay Academy Fortnightly from the 1880s and puzzles in boxes. Another contained photographic equipment, including cameras and camera cases: I duly started going through this chest, taking each item out to list and photograph and had no idea of the significance of one item that I was about to encounter. 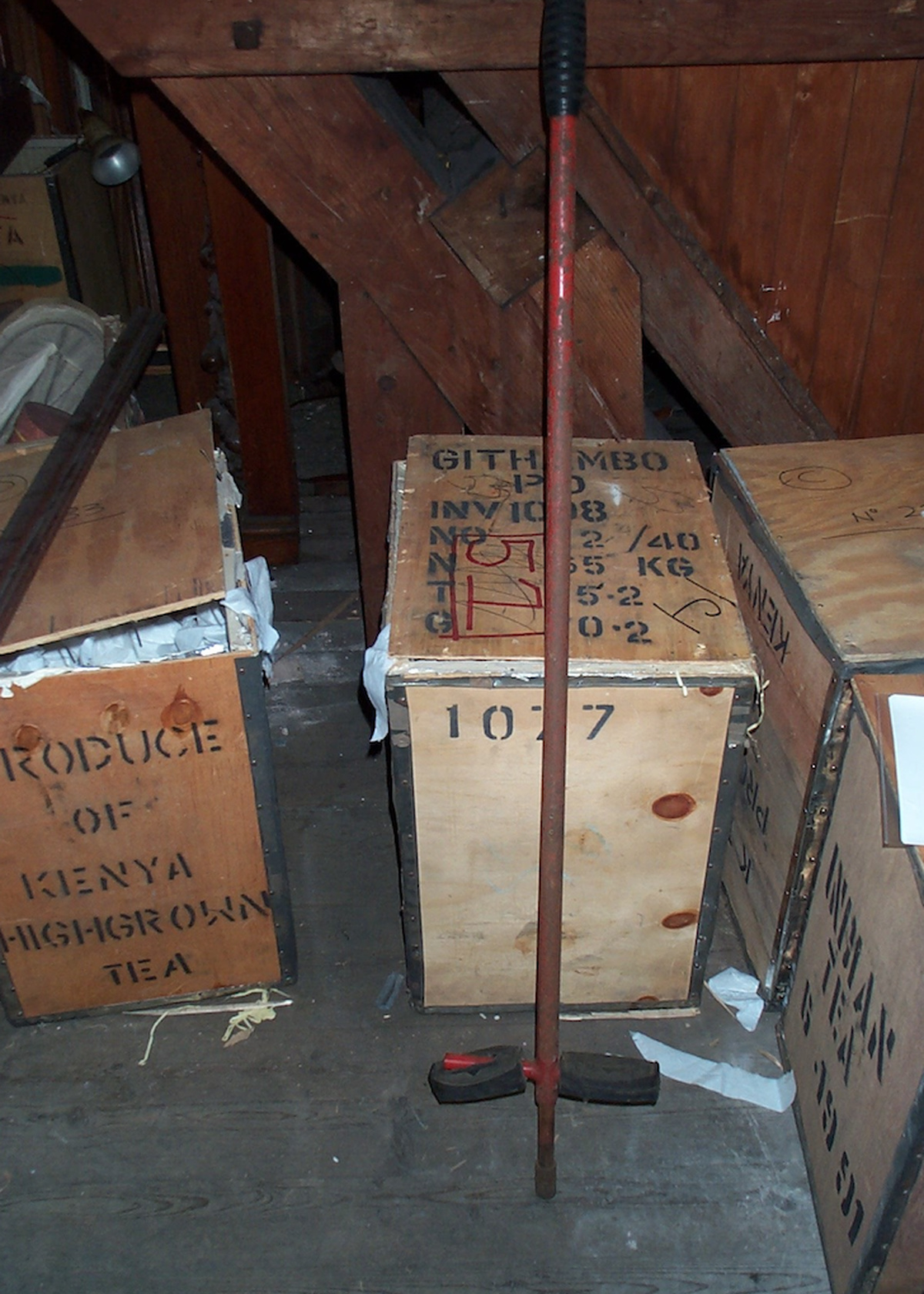 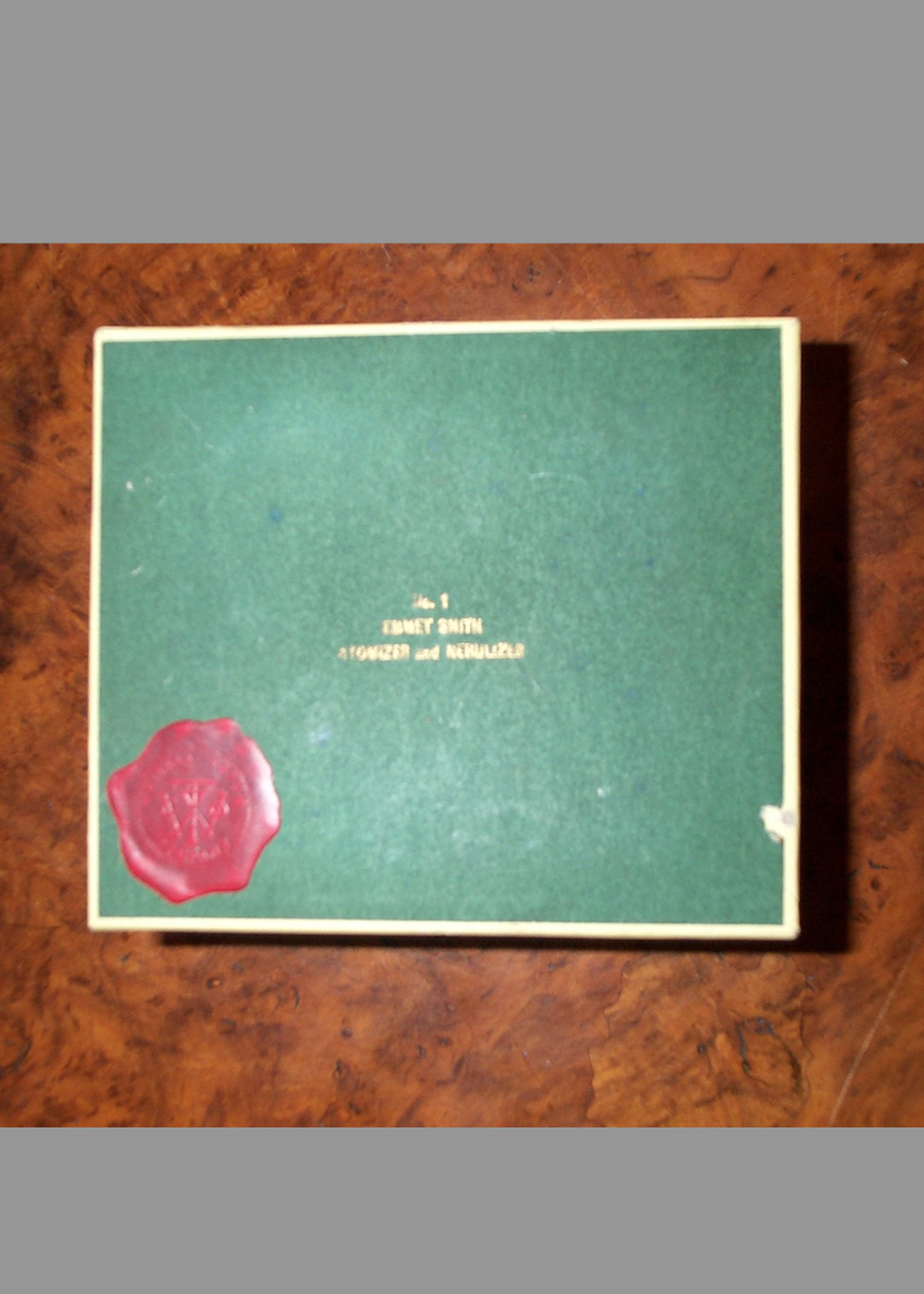 There was a small green box, a few inches wide and almost square, with gilded tooling and a red wax seal on the top. Intrigued, I opened the box to find a length of 35mm film and nothing else. I knew I could cause damage to the film if I took it out of the box, so along with other items I had found, I made my way to the office of Andrew McLean, who was the Archivist.

The final item I presented to him was the small green box containing the film. He removed the lid, and with great surprise and equal concern noted that it was a nitrate film, and that it would need to be removed from the building as soon as possible due to this type of material being prone to spontaneously combusting if it deteriorated too far. He carefully lifted the film out of the box to try to determine what, if anything, could be on it from the outer scenes, as it could not be unrolled – and it looked like the film may be the wedding of the 4th Marquess of Bute.

McLean contacted the Scottish Screen Archive (now known as the National Library of Scotland Moving Image Archive), and within a week the film had been collected and taken to their facility for safe keeping and storage. The following three years saw a painstaking project to restore the shattered film, in the hope it could be preserved and watched. This work was digitally restored with support from the Heritage Lottery Fund, and we received the confirmation that the film was indeed that of the wedding of John Crichton-Stuart, 4th Marquess of Bute, and Augusta Bellingham. The silent film is the oldest wedding film in Scotland - and probably the world – however, we sadly we do not know who was responsible for the film. 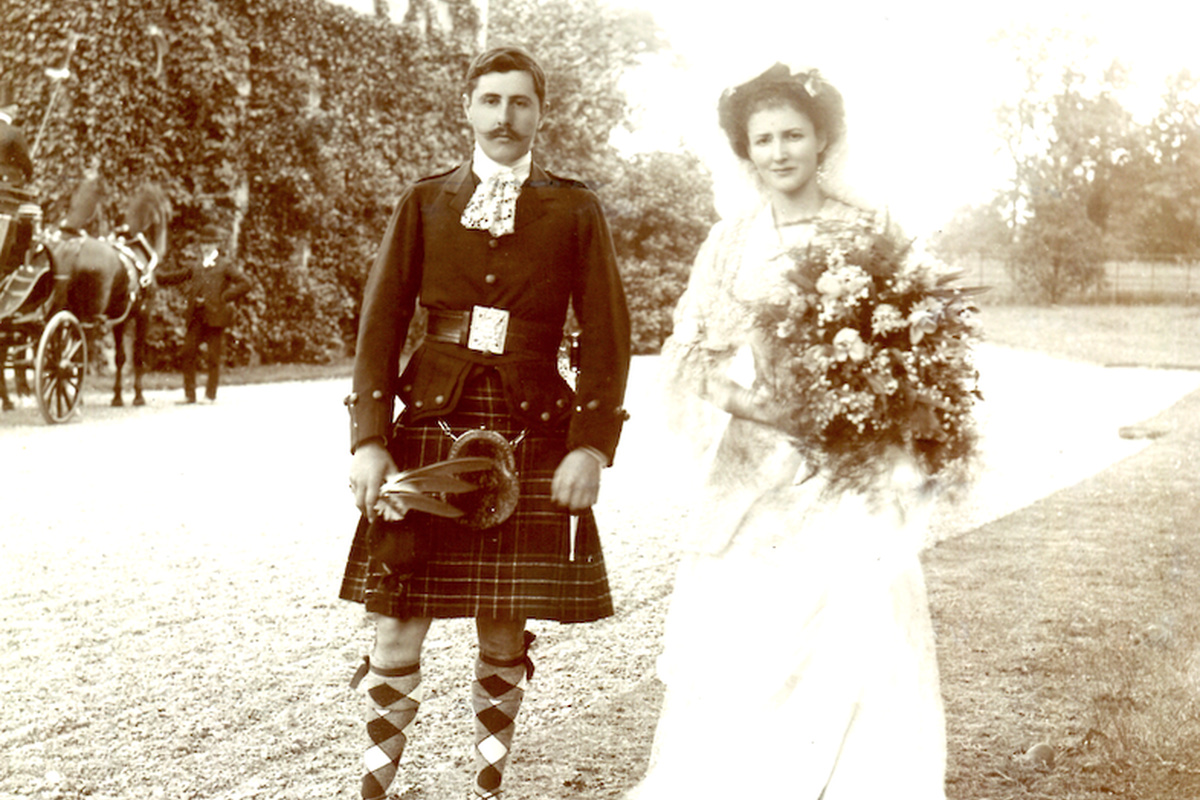 The Bride and Groom on their wedding day.

John Crichton-Stuart, 4th Marquess of Bute (1881-1947), married Augusta Bellingham on 6th July 1905 at Kilsaran Church, County Louth, Ireland, a short distance from the bride’s family home, Bellingham Castle. She was a daughter of Lady Constance Gainsborough, daughter of Charles Noel, 2nd Earl of Gainsborough and Sir Alan Henry Bellingham; an Anglo-Irish Conservative Member of Parliament, Justice of the Peace, High Sheriff of Louth and Lord Lieutenant of Louth and served as Senator of the Royal University of Ireland and Private Chamberlain to Popes Pius IX, Leo XIII and Pius X. 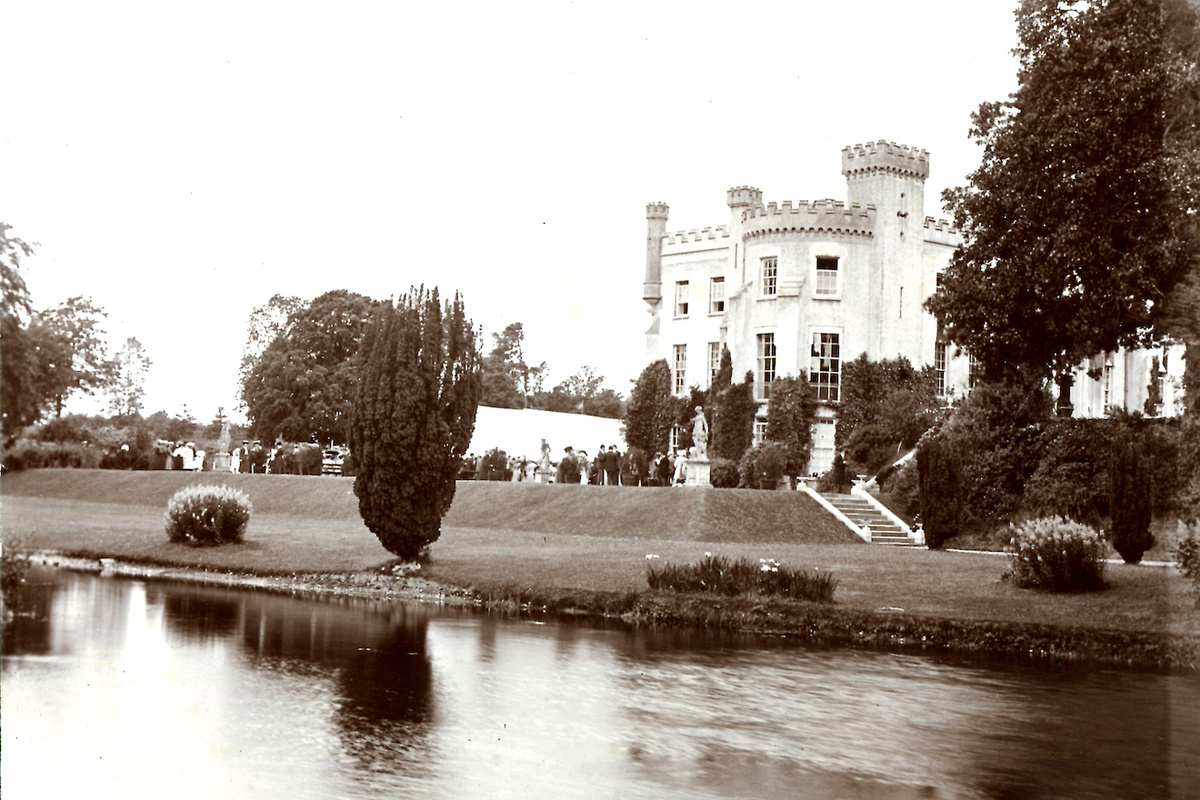 The film begins with a garden party at Bellingham. The bride-to-be is seen meeting and mingling with guests, who seem to be intrigued by the technology recording the event. The following scene is the morning of the wedding with crowds gathered and awaiting the arrival of the bride and groom at Kilsaran Church. Family members and invited guests walk towards the church followed by the Minister, the groom, and his best man (his brother) Lord Ninian Crichton-Stuart.

The choir walks towards the church ahead of the bride with her father and they are immediately followed by Lady Margaret Crichton-Stuart, the groom’s sister, and first of five bridesmaids. As no filming was permitted inside the church, the following scene shows the wedding party exiting the church, with all the gentlemen tipping and waving their hats as the bride and groom pass by, and onlookers can be seen trying to be caught on camera. The bride and groom then boarded a rowing boat to be taken to a waiting steamer, the Princess Maud, to embark on their honeymoon, starting at the Old Place of Mochrum, Wigtownshire. They were swiftly followed by another rowing boat containing the Rothesay Pipe Band. 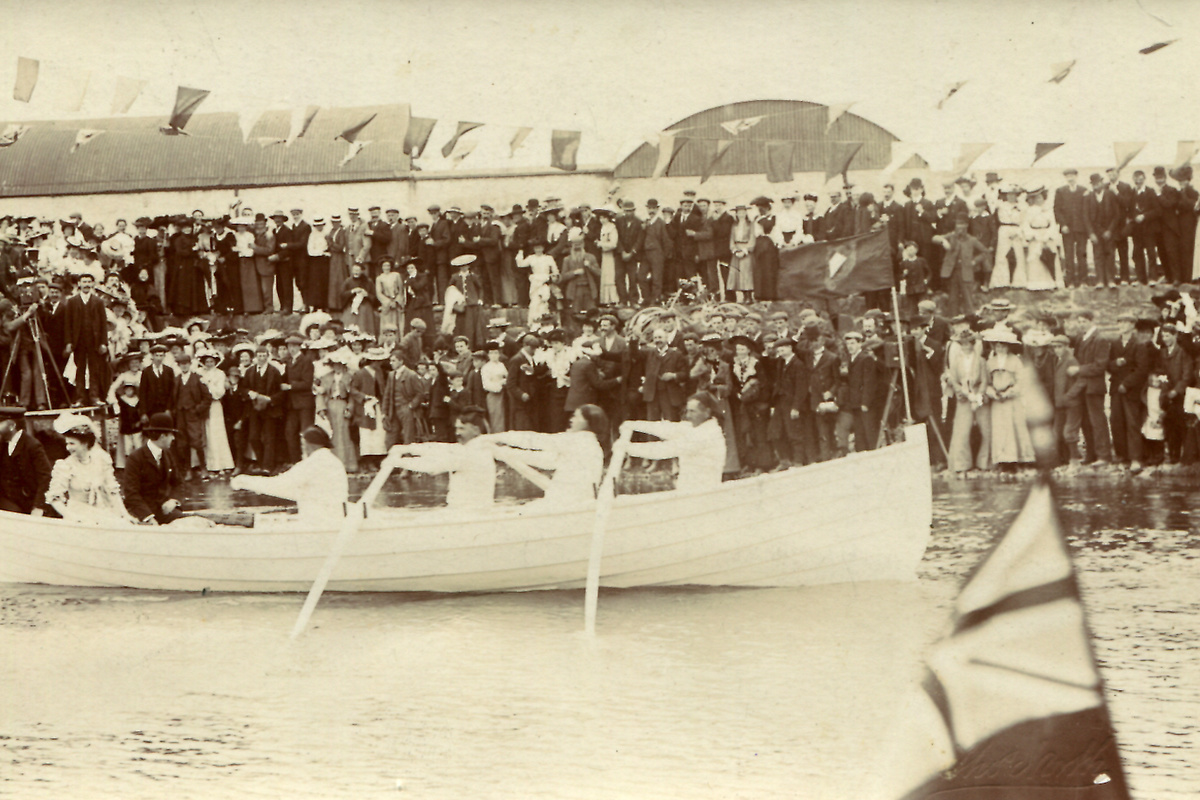 The 4th Marquess and Marchioness heading to the Princess Maud.

Augusta, 4th Marchioness of Bute was an avid record keeper, which has resulted in the Bute Archive holding an incredible collection of newspaper cuttings and photographs as well as the wedding journey and timetable from this unique event. The first time the film was shown in the Marble Hall was just one week after the wedding itself took place, when it was shared with family and friends. On 13th July 1905, the Daily Express published details of this event:

"The Marquis and Marchioness of Bute are entertaining a party at Mount Stuart this week for the grouse-shooting. They provided for their friends the other evening a cinematograph show - the pictures given being a representation of their own wedding and the attendant festivities at Castle Bellingham. The marble hall at Mount Stuart, where the entertainment took place, is one of the most sumptuous apartments in the kingdom." 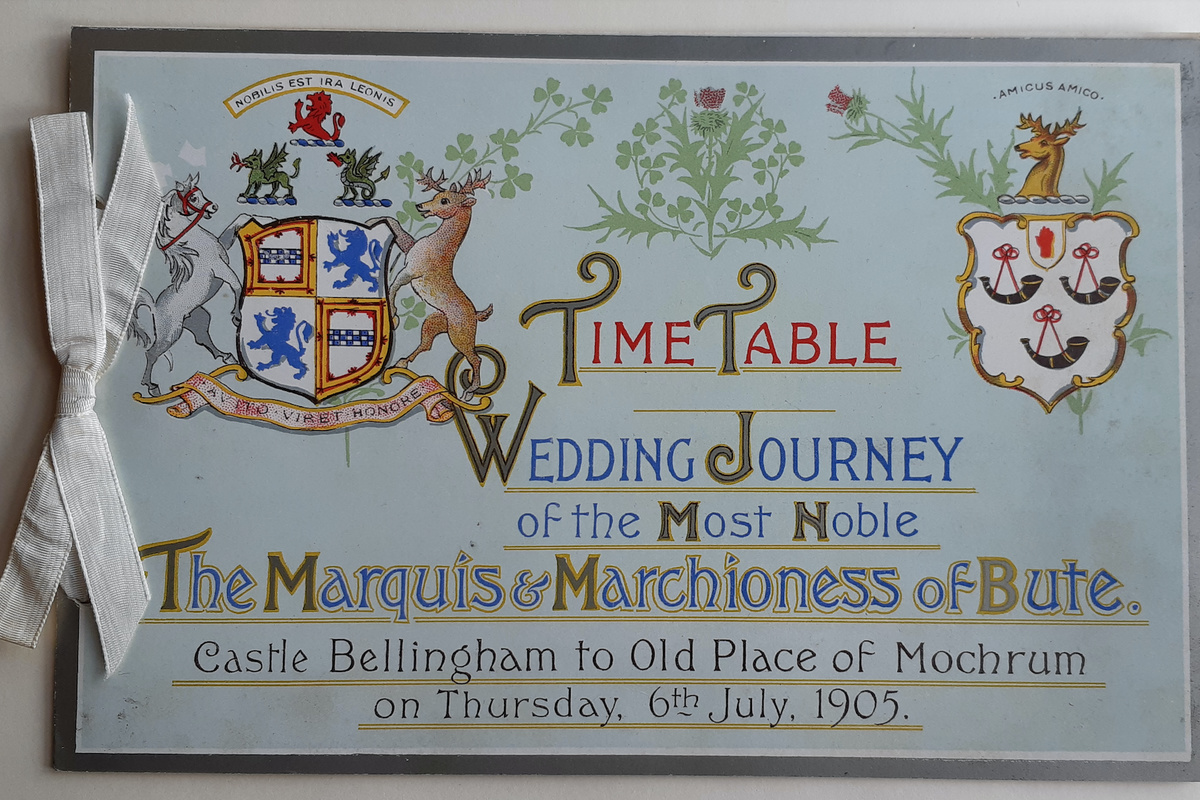 Timetable for the Wedding Journey.

On 19 June 2008, almost exactly 102 years after the original event, the film was shown in the Marble Hall at Mount Stuart for the second time since its creation. An Old Bute on Film event took place with a specially curated programme of film from the era of silent cinema reflecting the island of Bute. It featured two recently discovered films from the Edwardian era: one which was a recently preserved fragment of travelogue (a tram ride around Rothesay Bay in 1909), which had never been shown in Scotland owing to it being discovered in a private collection in Germany. The other film was the Bute wedding film made on the 5th and 6th July 1905, which McLean introduced the audience. 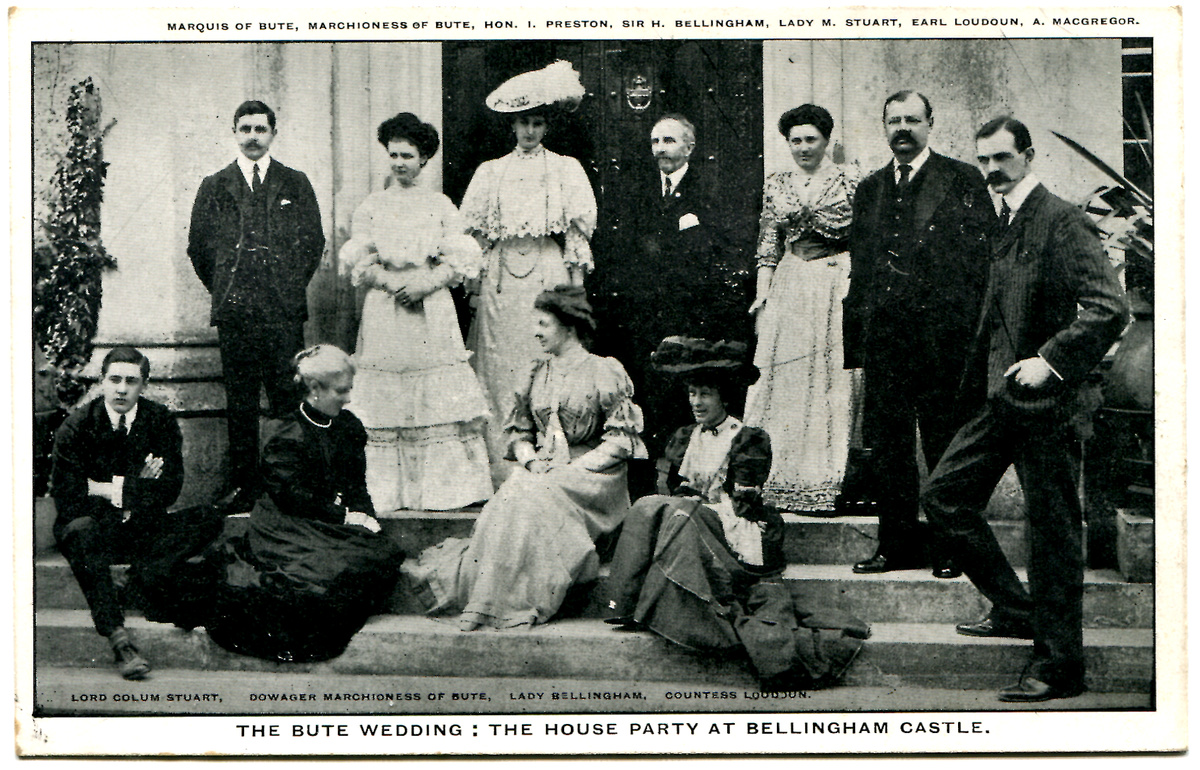 The wedding party at Bellingham Castle.

For more stories from our Collections Team, take a look at The Bute Collection Unlocked where you can explore some of their favourite finds from the Archive, Libraries, Fine & Decorative Art Collections cared for at Mount Stuart. 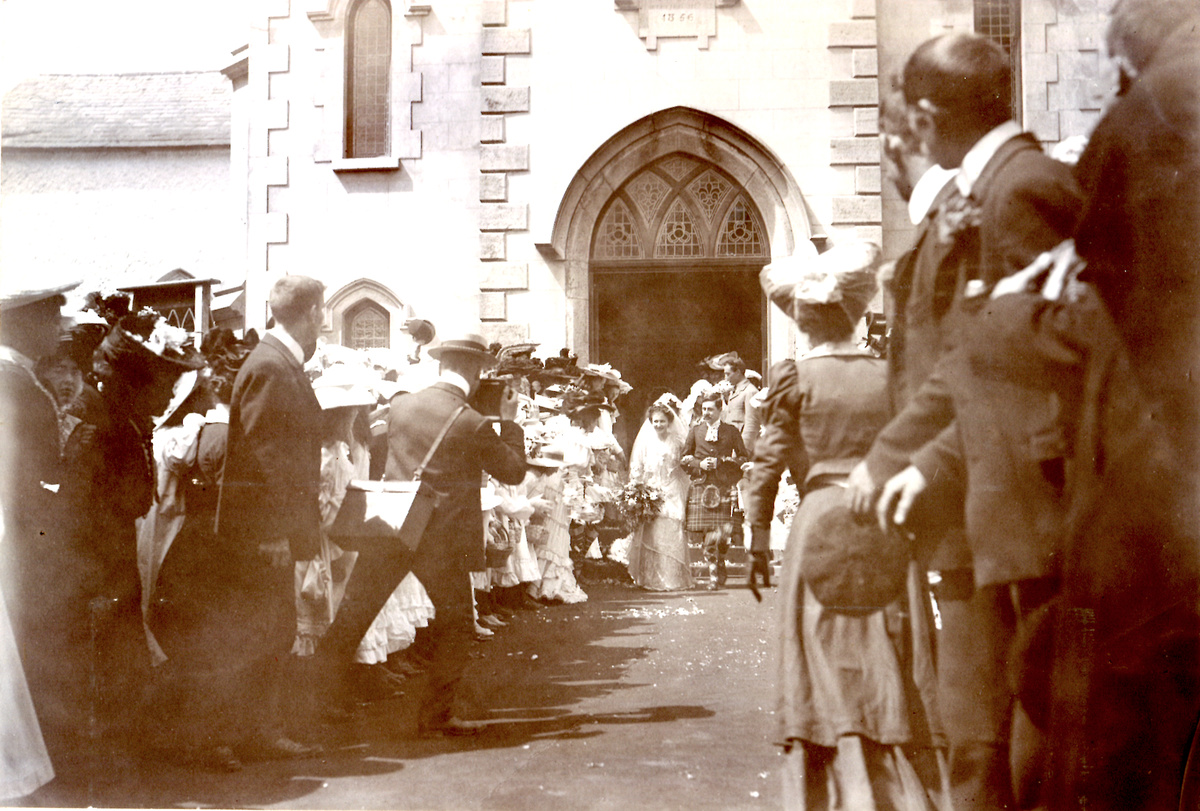 Arrange Whatever Pieces Come Your Way: Gather and Arrange

Film: There is a Volcano Behind My House