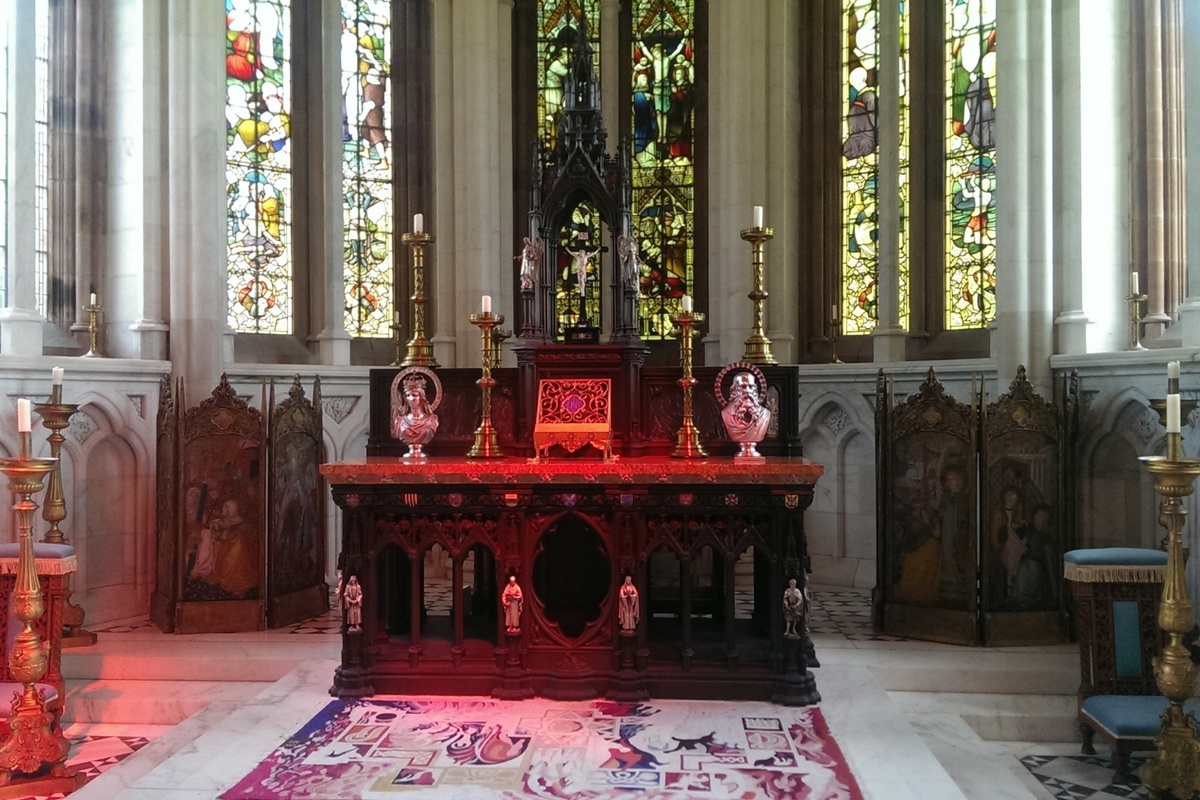 Responsible stewardship and preservation of the items in our care have been at the heart of the Mount Stuart Trust’s mission since it first opened its doors to the general public in 1995.

As we approach our 25th anniversary this summer, we are delighted to share one very special object which has been the focus of a recent internship hosted by the Mount Stuart Trust in conjunction with the Master of Arts post-graduate degree course in Dress & Textile History at the University of Glasgow. We are grateful to Tracy Harrison Butler for her contribution. 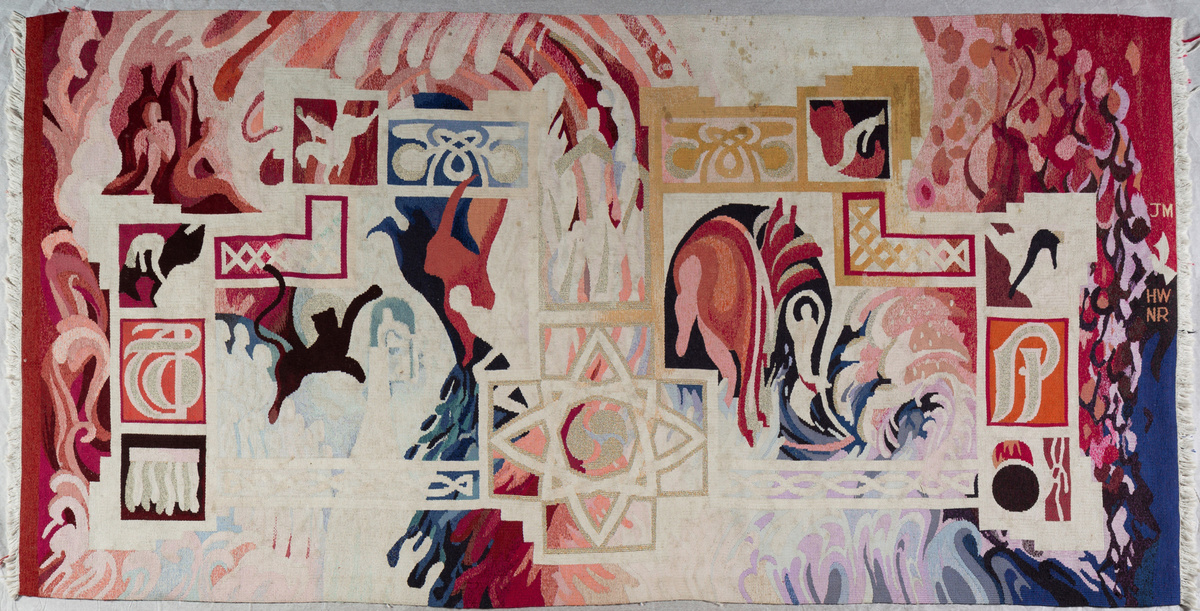 The Revelation of St. John Tapestry (1992) by James More

In 1992 the spectacular Revelation of St. John tapestry was commissioned by John Crichton Stuart, the 6th Marquess of Bute, for the dais in front of the altar in the white Marble Chapel at Mount Stuart. The tapestry was hand-woven at the Dovecot Studios also known as the Edinburgh Tapestry Company. Originally founded by the 4th Marquess of Bute in 1912, by the late 20th century the Dovecot was looking back on a long tradition of corporate and private commissions. At Mount Stuart Revelation marked the end of a period of almost twenty years during which highly sympathetic restoration work and new commissions were undertaken throughout the house and gardens. Like his forebears, the 6th Marquess together with his wife was a great supporter of the arts and crafts, both historic and contemporary. The couple exercised patronage with imagination and flair, and many of their commissions have become integral to the Mount Stuart which visitors can experience today. 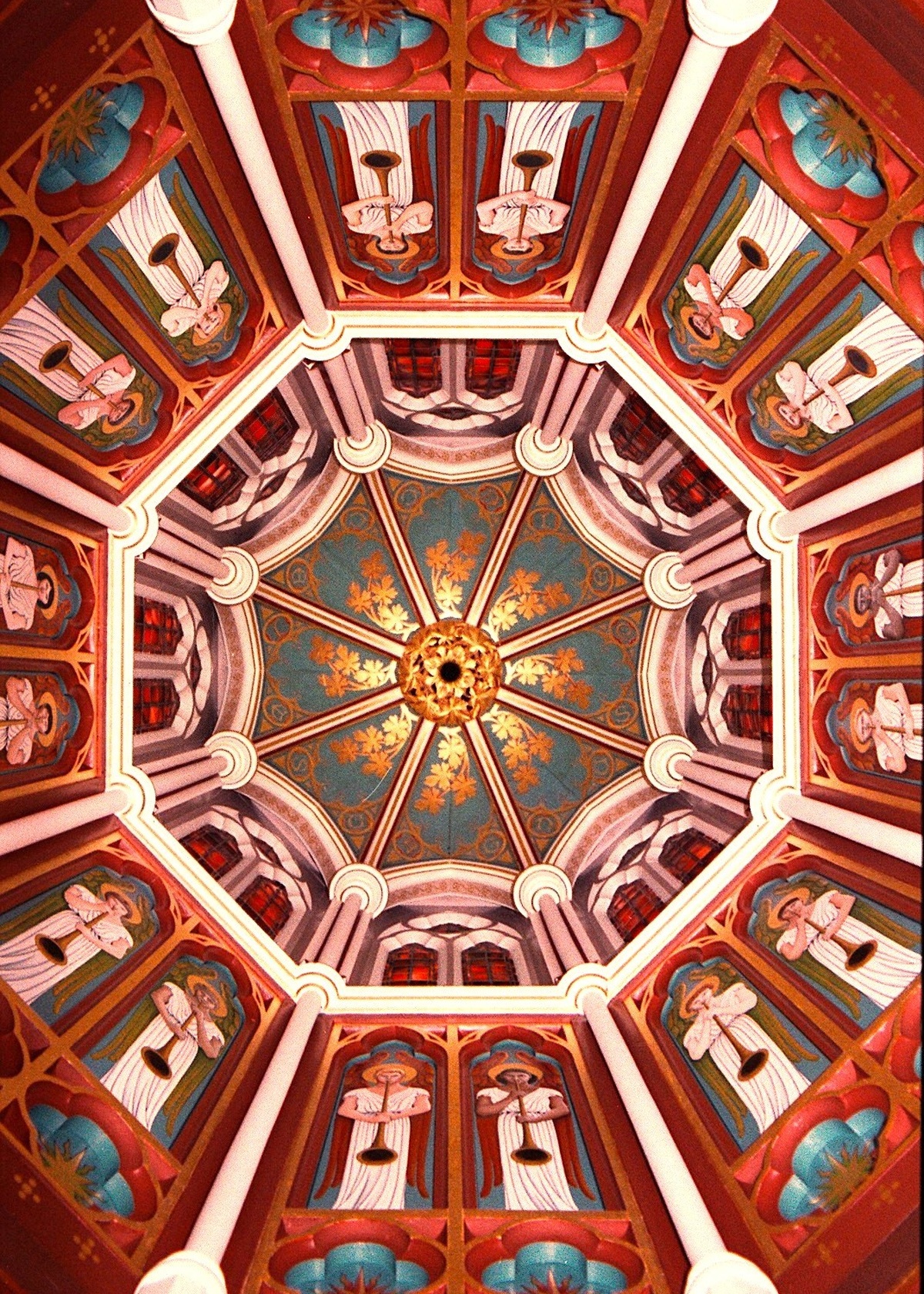 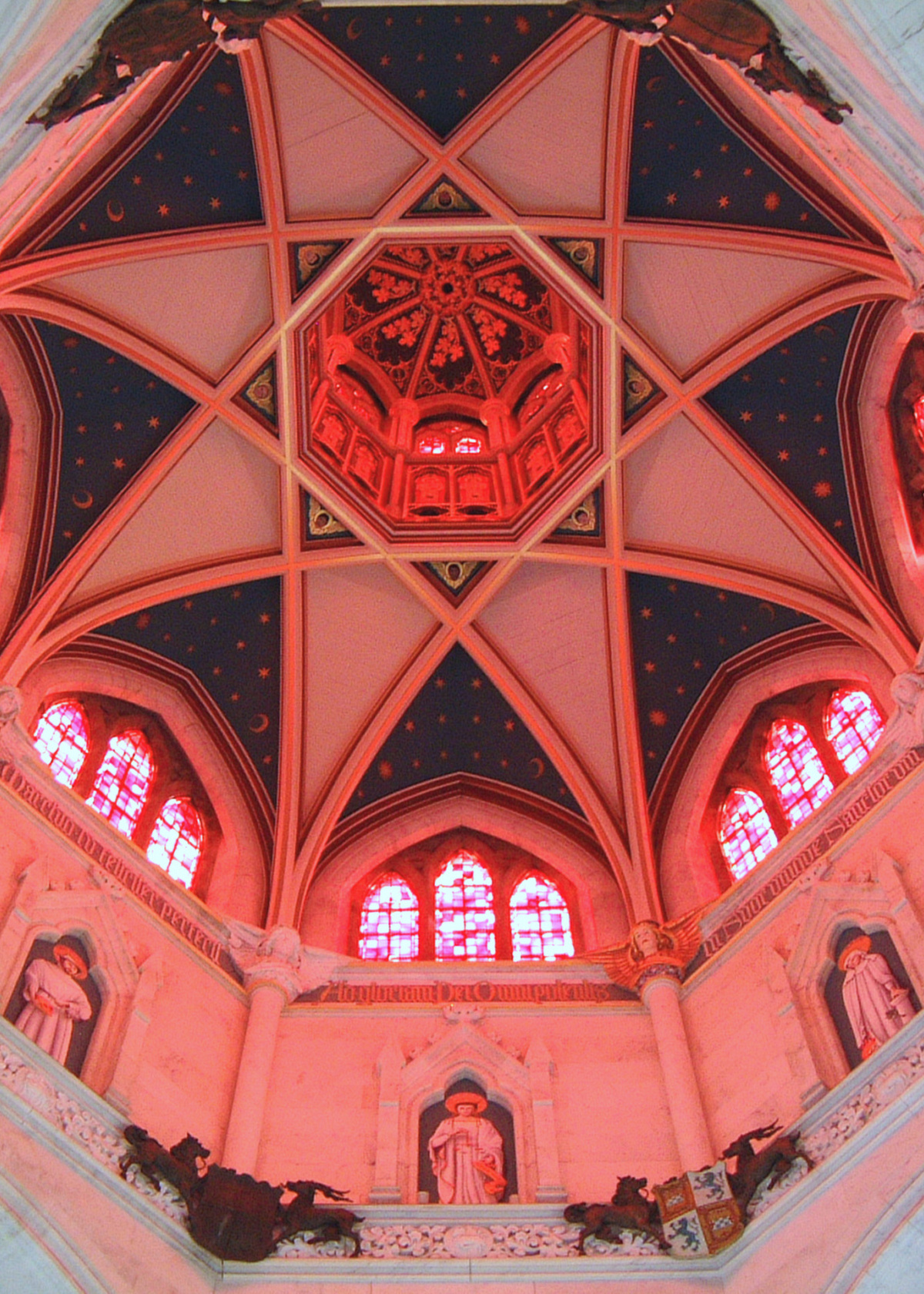 The Sir Robert Rowand Anderson-designed Marble Chapel is dedicated to St. John the Divine, and its white Carrara marble and rose-coloured lantern set within a cupola provided the inspiration behind the tapestry. Designed by then Director of the
Dovecot James More, The Revelation of St. John tapestry was woven by master weavers Harry Wright and Naomi Robertson. Their initials, together with that of More’s, have been visibly incorporated into the work. The vibrant piece is made of cotton, wool and a metallic yarn called Lurex and illustrates scenes from the Book of Revelation. The complex design is structured around a trellis of Celtic ornamentation which represents the walls and turrets of the New Jerusalem which rise up after the apocalyptic visions of Revelation. Symbolism is apparent throughout the tapestry; trumpeting angels, boiling seas, the star Wormwood, and the darkness surrounding the sun and moon can all be found. 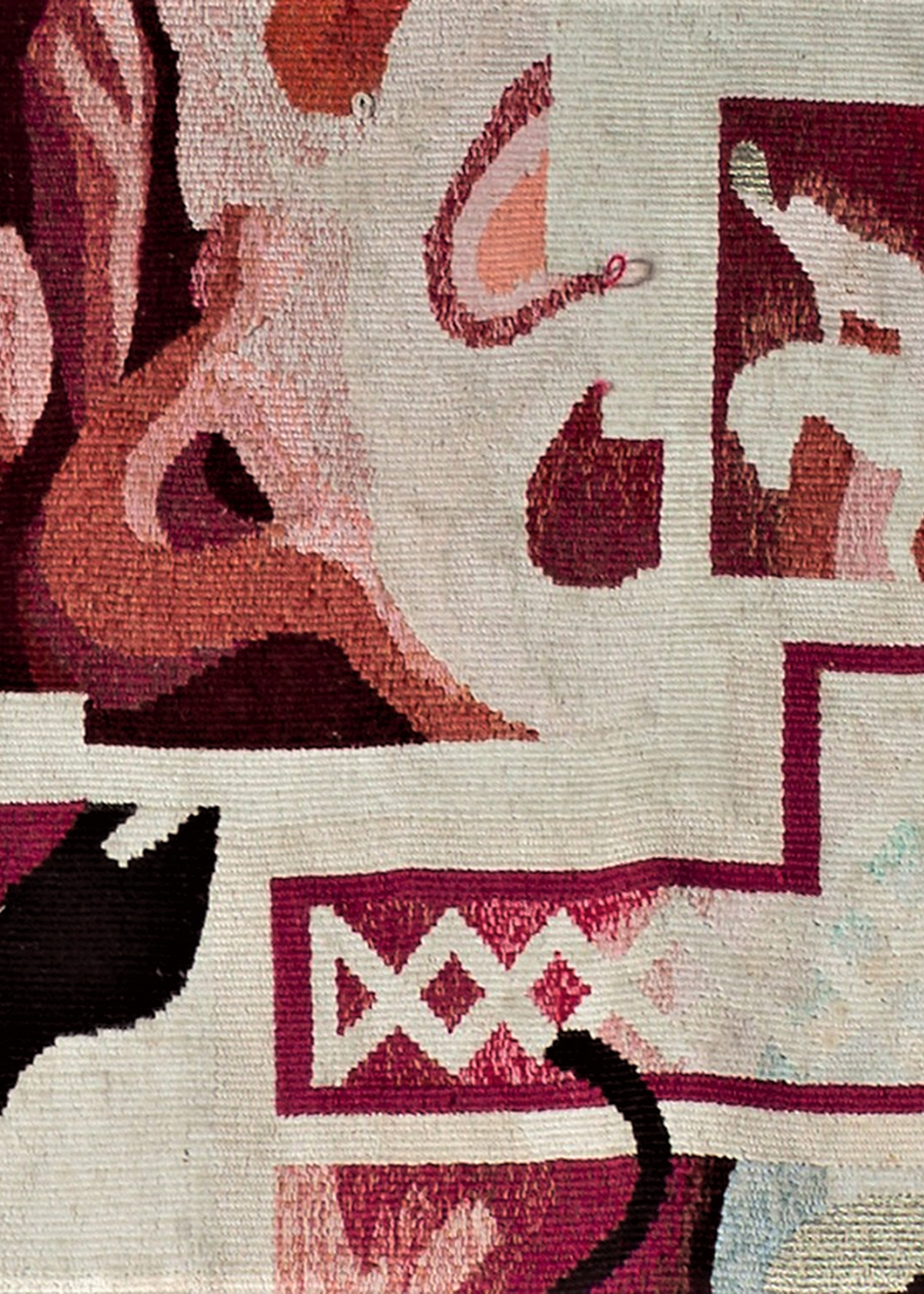 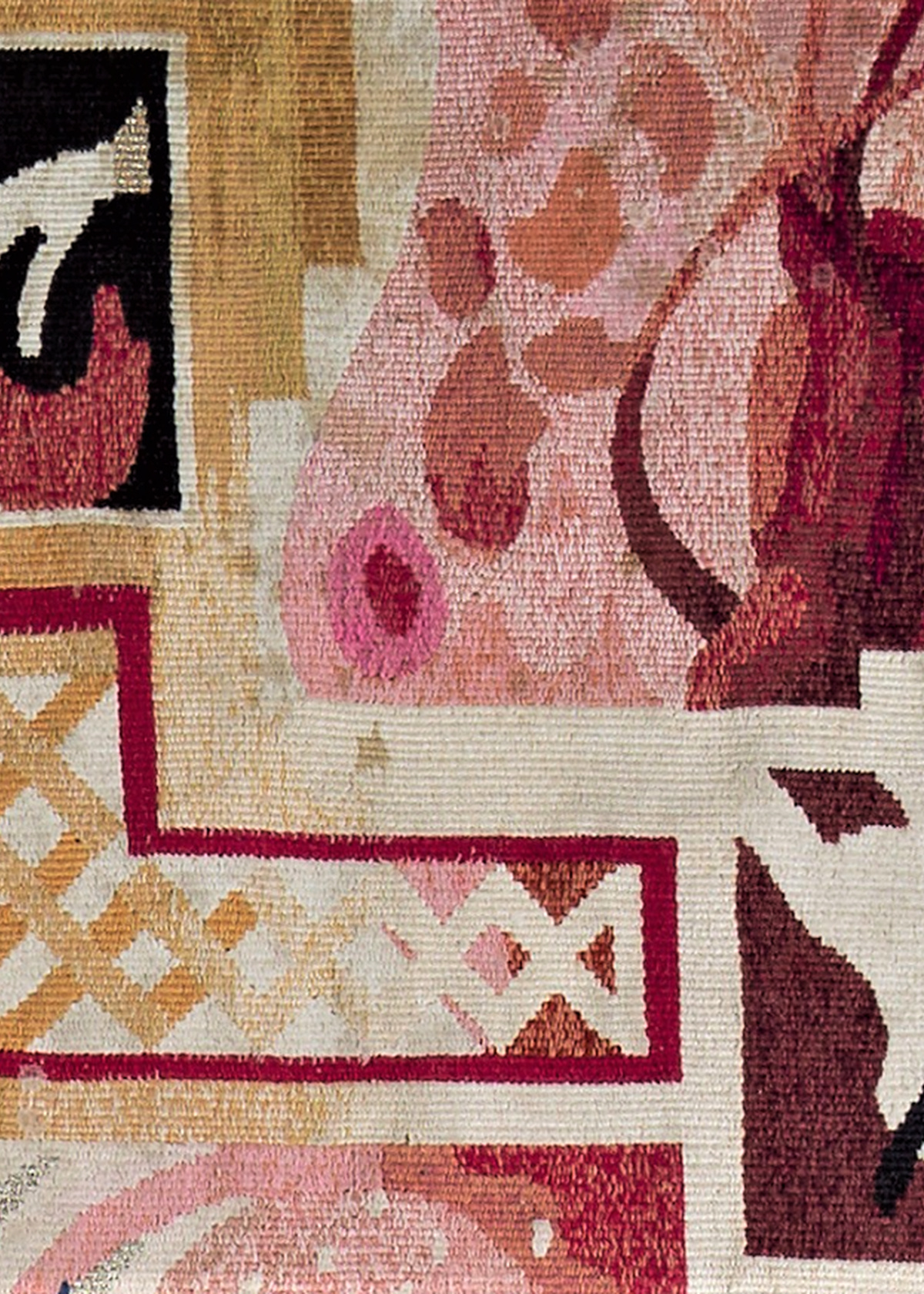 The four horsemen, harbingers of the last judgment and the divine apocalypse, ‘ride’ across the textile. They can be identified as War, Pestilence, Famine and Death and, in accordance with the Book of Revelation, are represented by differently coloured horses: the white horse, whose rider sets out as a conqueror bent on conquest; the fiery red horse whose rider brings bloodshed and war; the black horse whose rider will wipe out wheat and barley supplies; and finally, the pale horse rider, who was named Death. James More also clearly depicts the Beast whose tail is used to sweep a third of the stars out of the sky flinging them to the earth. 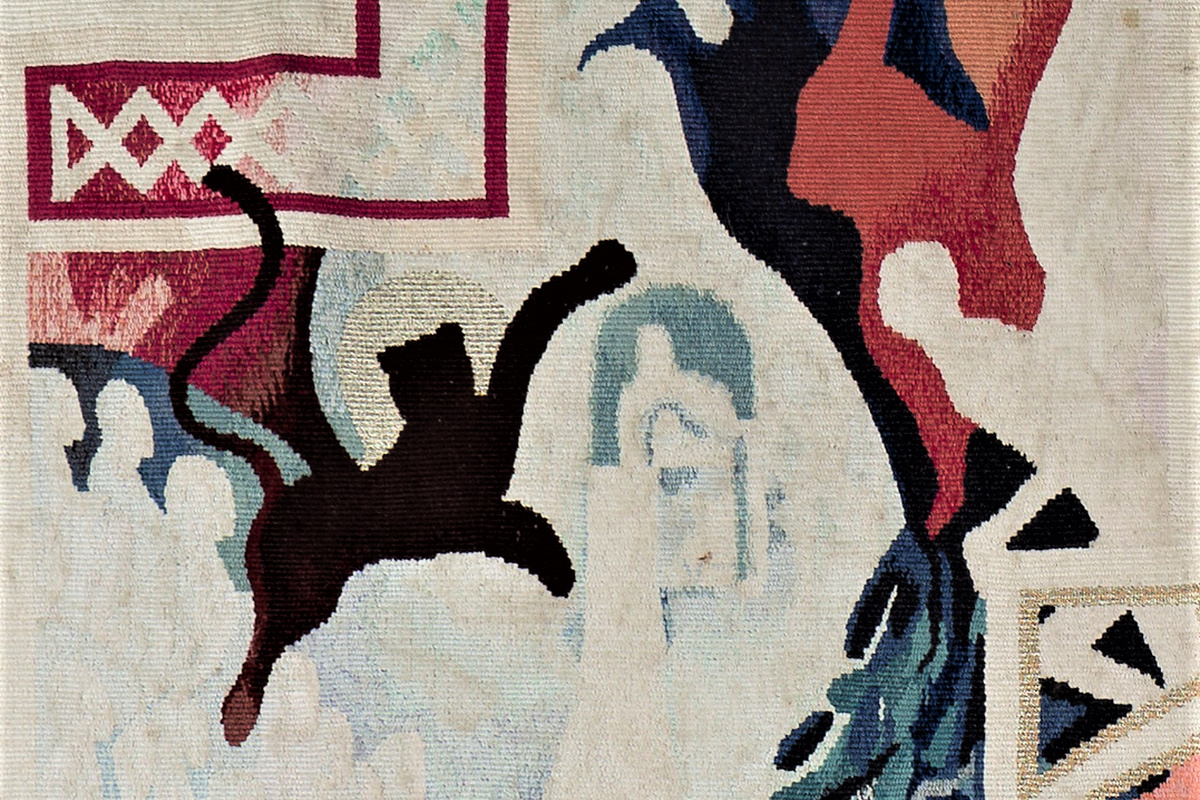 The impressive design is complemented by strong colours using full-bodied reds, purples and pinks against a creamy background. Together they express the deep intellectual and spiritual connection the 6th Marquess had with the setting. 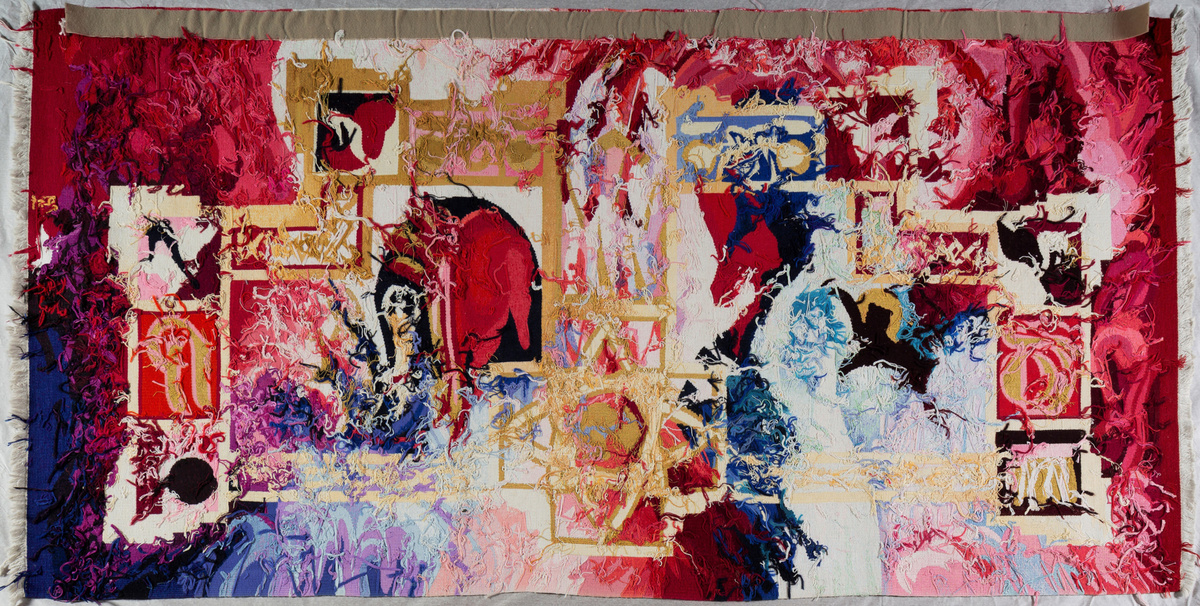 The reverse of the Revelation of St. John Tapestry

Nearly 30 years of exposure during which tens of thousands of visitors have been able to enjoy the piece in its authentic setting have left their mark. Whilst the traces of thermal and chemical degradation, mechanical stressors and physical ageing are evident to some extent, by far the most dramatic impact has come from light: direct sunlight including UV light, filtered sunlight (through the coloured glass), reflected light bouncing off the white marble and also electric light. The once rich colours have faded, and the gold Lurex has turned silver. The full extent of the degradation is only revealed when the tapestry is turned on its back. Here, the original strength of the colourful dyes has survived almost unscathed and gives a sense of the eye-catching focal point the tapestry was originally designed to be. 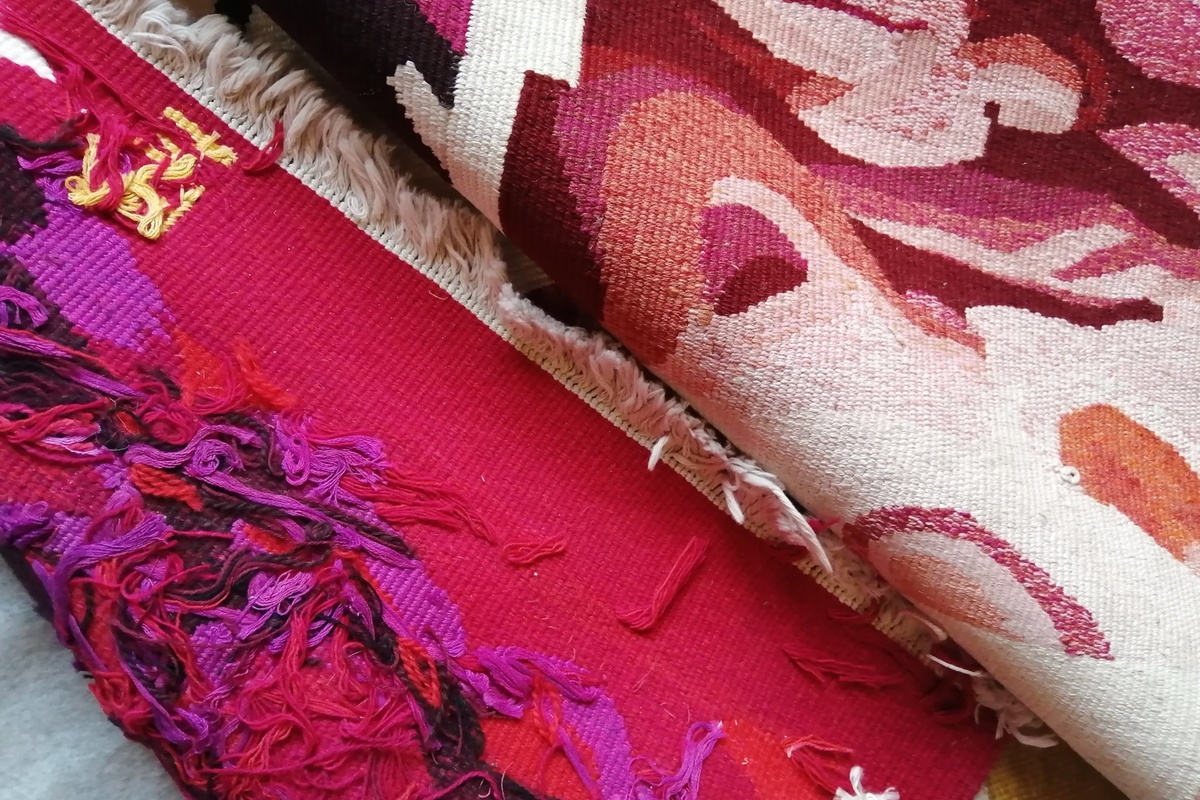 In order to help us arrest further degradation of the colours we have removed, cleaned and stored the tapestry and are currently considering strategies for safe redisplay.