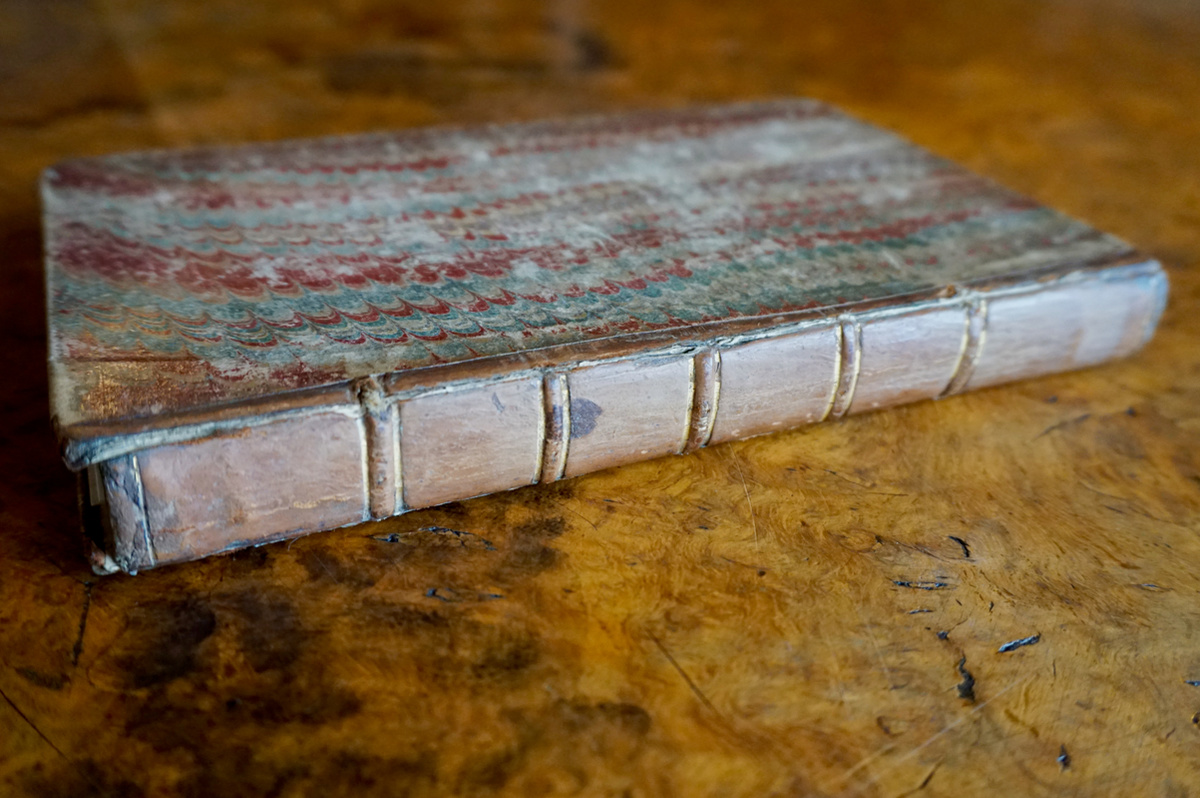 On 25th January in 1759, a boy who would become Scotland’s National Bard was born in Alloway, Ayrshire, to a tenant farmer named William Burnes and Agnes Broun. Today, we celebrate the day of Robert Burns’s birth, and for this Burns Night we are delighted to share some recent research into one of the treasures of the Bute Collection at Mount Stuart: a rare copy of the first edition of Robert Burns’s work.

This was printed and issued by John Wilson of Kilmarnock on the 31st July 1786, and it contains some of Burns’s most well-known poems and songs from ‘Halloween’ and ‘The Cotter’s Saturday Night’ to the beloved ‘To a Mouse’. Only 612 copies of Burns’s octavo ‘Kilmarnock’ edition were published by Wilson through subscription, costing 3 shillings each in blue paper wrappers with untrimmed fore-edges. Only seven people purchased two-thirds of the initial print run, with the rest of the copies being available for sale through local distribution to subscribers in Ayrshire. Nevertheless, on publication the ‘Kilmarnock’ edition caused a regional literary sensation, with all copies having been sold by the 6th September 1786. Burns’s newfound recognition led him to discard his plans to emigrate to Jamaica and instead the Ayrshire wordsmith moved to Edinburgh to find himself a printer for a second ‘Edinburgh’ edition of Poems, Chiefly in the Scottish Dialect, which would be printed nine months later. 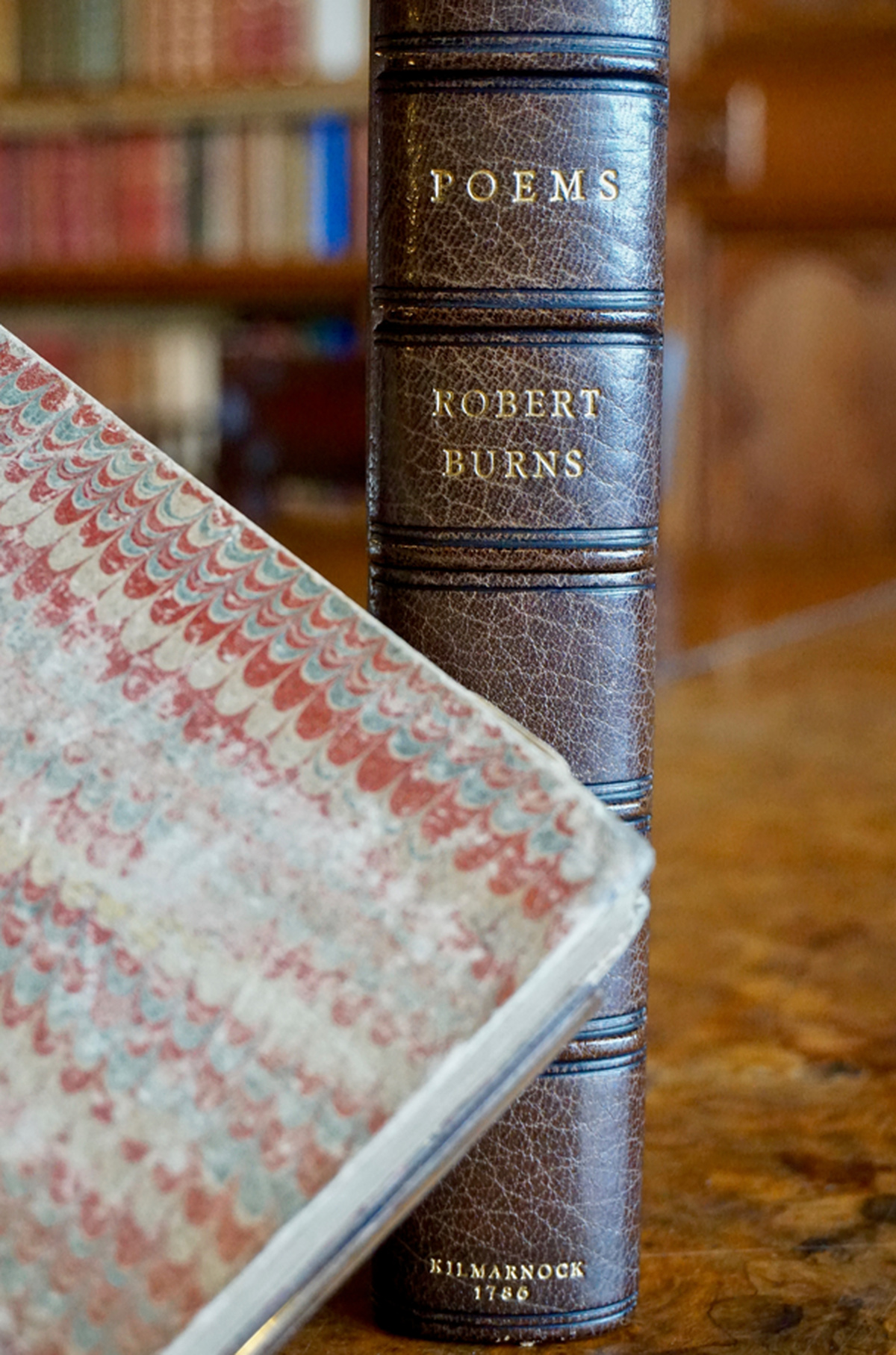 The original blue wrappers that ‘Kilmarnock’ editions were produced in were fragile and prone to damage, leading many copies to lose their original covers, and typically being re-bound in the early 20th century with more luxurious (and hardwearing) leather bindings. However, the Bute Collection’s ‘Kilmarnock’ edition is special as it has been produced with a contemporary 18th century binding with blue, yellow and red watermarbled boards and a calf spine with gold tooling. The 1896 Catalogue of the Library Books at Dumfries House, Old Cumnock, Ayrshire (MS 280), notes that the Bute ‘Kilmarnock’ edition is in fact a ‘presentation copy from [the] printer’, suggesting that this may have been bound as a gift copy according to the wishes of the publisher, John Wilson.

Alongside the fascinating ‘Kilmarnock’ edition itself, the book’s brown box holds another surprise: an asbestos-lined slipcase. The book box and slipcase were made by the London bookbinders Robert Riviere & Son, and asbestos was likely used in the slipcase as a material to protect the precious volume it encases from any potential fire damage. Through comparison with other Riviere bindings, it is likely that this case was ordered after 1881 and before 1896, as it shares similarities in style to other book boxes commissioned by John Patrick Crichton-Stuart, 3rd Marquess of Bute (1847-1900) from that period of time. 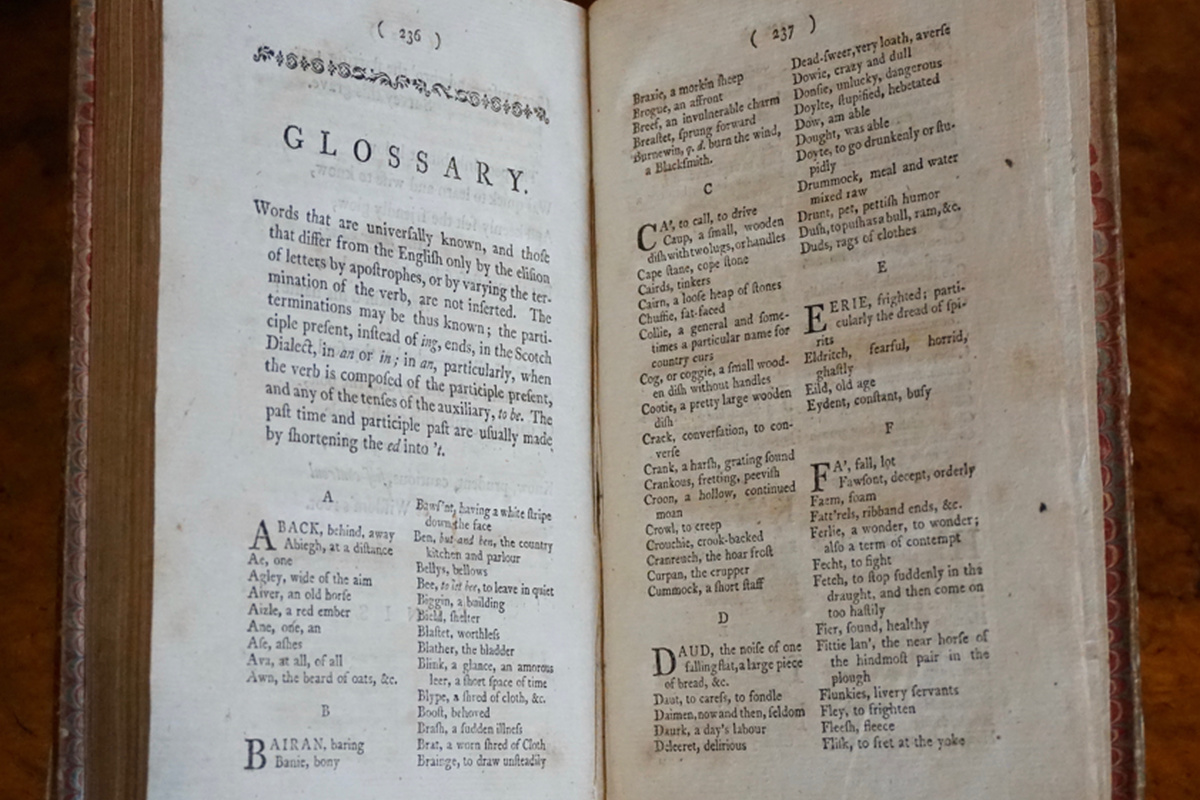 Despite the Bute ‘Kilmarnock’ edition having been in the Bute Collection since 1896, its acquisition and owners prior to the 3rd Marquess of Bute have never been investigated before. Recent research into the small crosses which feature in the Bute copy’s margins suggests that the Bute ‘Kilmarnock’ volume may be the ‘Kilmarnock’ edition which had a contemporary binding and ‘a small cross in ink opposite some of the Poems in the contents’ that was sold in the Auchinleck Library sale of 1893. This auction saw the sale of books from Auchinleck House in East Ayrshire, which was the home of the Boswells of Auchinleck.

James Boswell and John Stuart, 1st Marquess of Bute (then Lord Mountstuart) travelled together on a Grand Tour of Italy in 1765, and this longstanding link between the Butes, Boswells and Ayrshire will most certainly not have been lost on the polymath 3rd Marquess of Bute. It was the London bookseller Bartholomew Robson (1846-1900) who bought the Auchinleck ‘Kilmarnock’ edition for a substantial £102, and it was the only book bought by Robson in the sale. This suggests that Robson was there to bid on the Auchinleck ‘Kilmarnock’ for a very specific client, and it is possible that his client may have been the bibliophile 3rd Marquess of Bute.

The Bute ‘Kilmarnock’ copy provides a tantalizing glimpse into the research opportunities which can be found within the special collections in the Bute Collection at Mount Stuart. 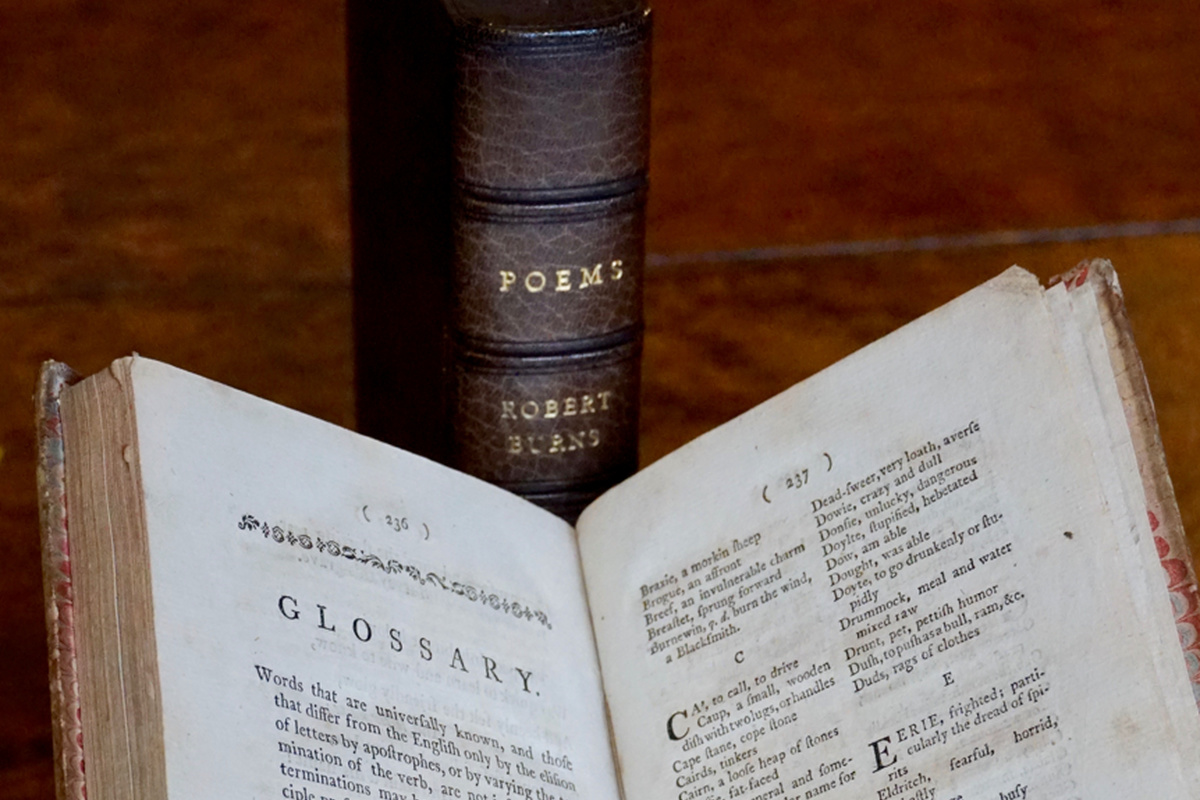 We would like to thank Professor Patrick Scott, Mr Allan Young, Dr James Caudle, and Mr Terry Seymour; our recent research on the Bute Kilmarnock copy is indebted to their remarkable work on the Kilmarnock Census, Boswell's Books and the work of the Centre for Robert Burns Studies at the University of Glasgow.

We are thrilled to be able to share the Bute Kilmarnock Edition on this Burns Night - with the Bute copy being the 86th copy located out of the original 612.