Whitney McVeigh: What is Worthwhile Doing in this World (2019)

Whitney McVeigh: What is Worthwhile Doing in this World (2019)

Mount Stuart Trust was delighted to announce a solo exhibition by Whitney McVeigh in the spring of 2019 as part of its expanded Contemporary Visual Arts Programme.

McVeigh reached into the Bute Archive, traditionally the realm of a patriarchal narrative, to focus on intimate traces of the history of women in the house, in particular Gwendolen Crichton Stuart, 3rd Marchioness of Bute (1854-1932) and Augusta Crichton Stuart DBE, 4th Marchioness of Bute (1880-1947). The exhibition was an opportunity to bring the archive into the public space, an encounter that alludes to layers of time and celebrates our universality. 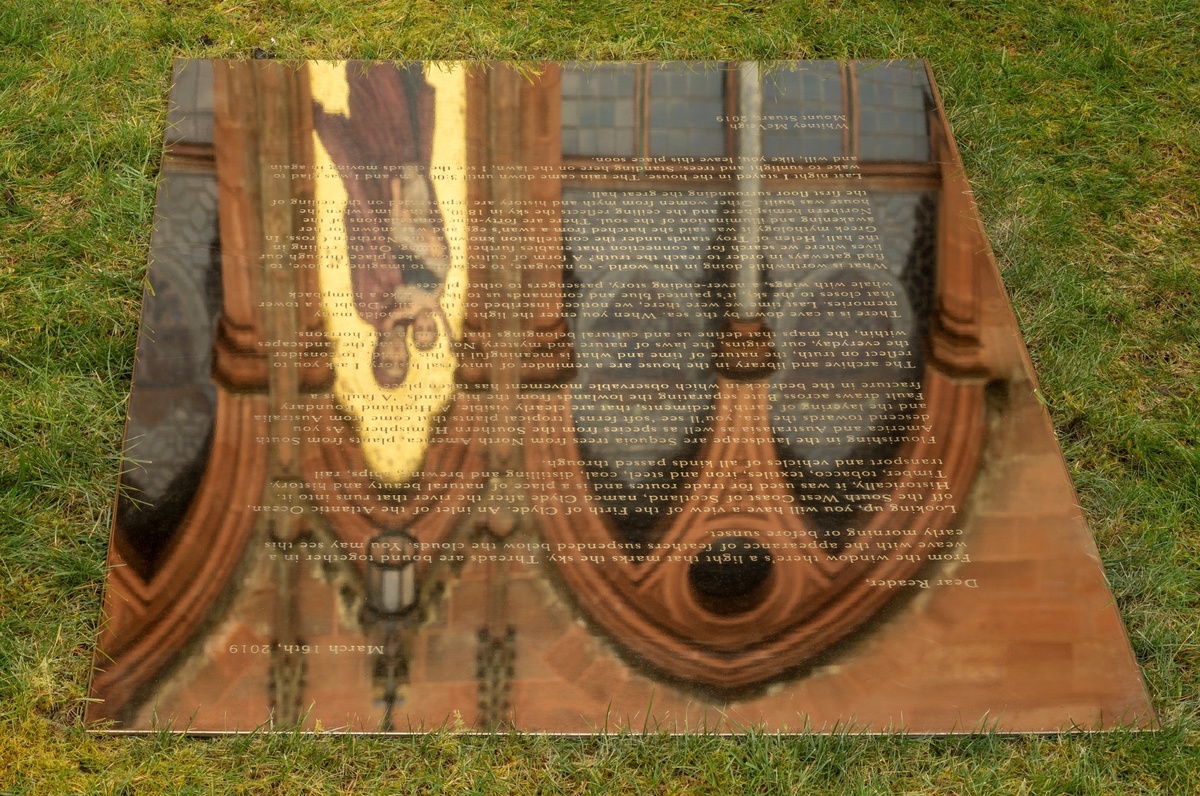 McVeigh’s practice is concerned with identity, memory and the collective unconscious. She refers to the “archaeology of memory” as a central concept in her work, and the belief that energy, in accordance with particle physics, never dies. In this show she presented curated assemblages of archive material and objects, and (following on from her recent work Divine Rules at the Getty Villa CA) a selection of books from the 25,000 publications in the Mount Stuart library, together with her own open letter and texts addressed to the public reader and inscribed on brass plaques placed throughout the house. 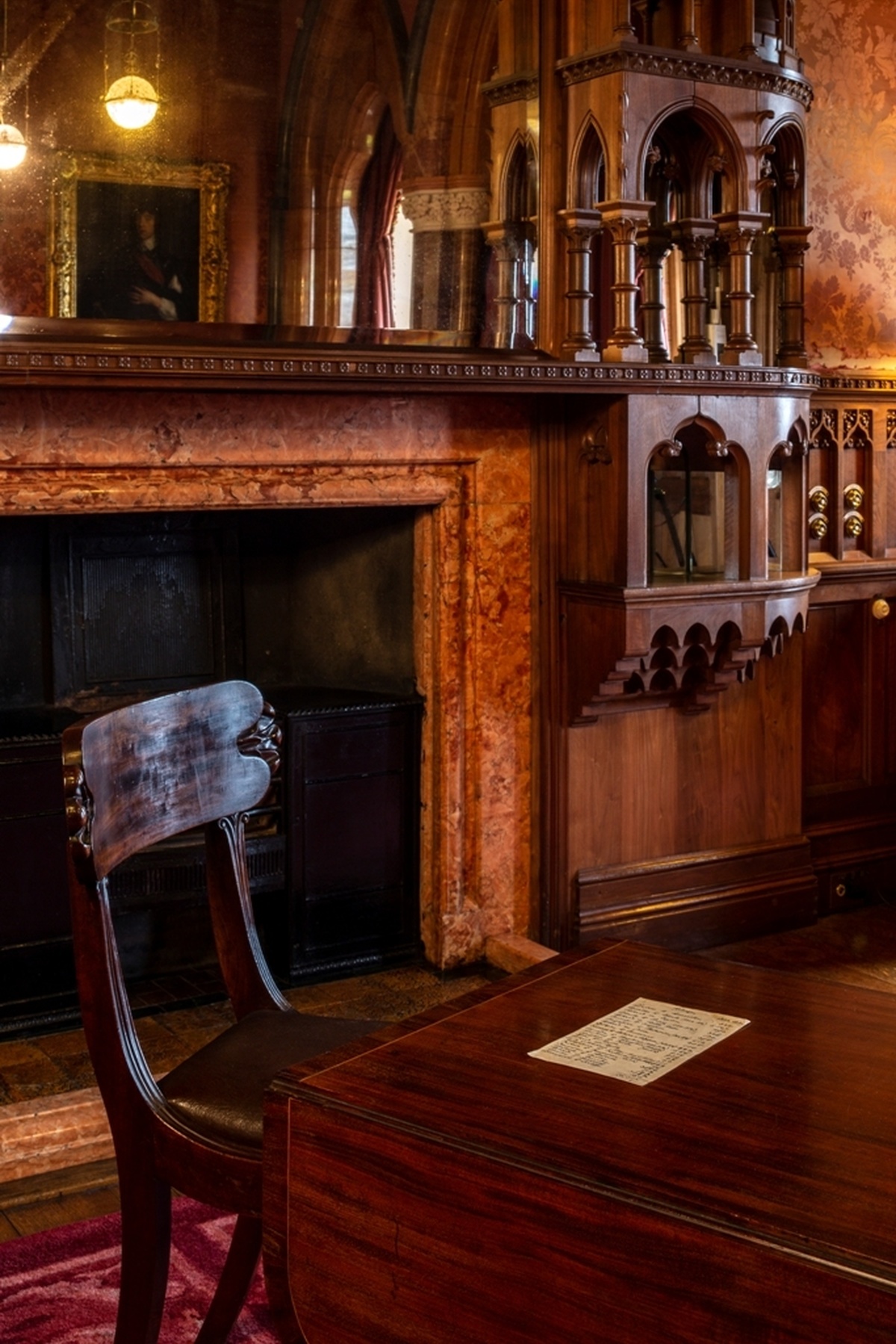 'She was Known to You', Sound Installation & letter from the archive, Running time 47min 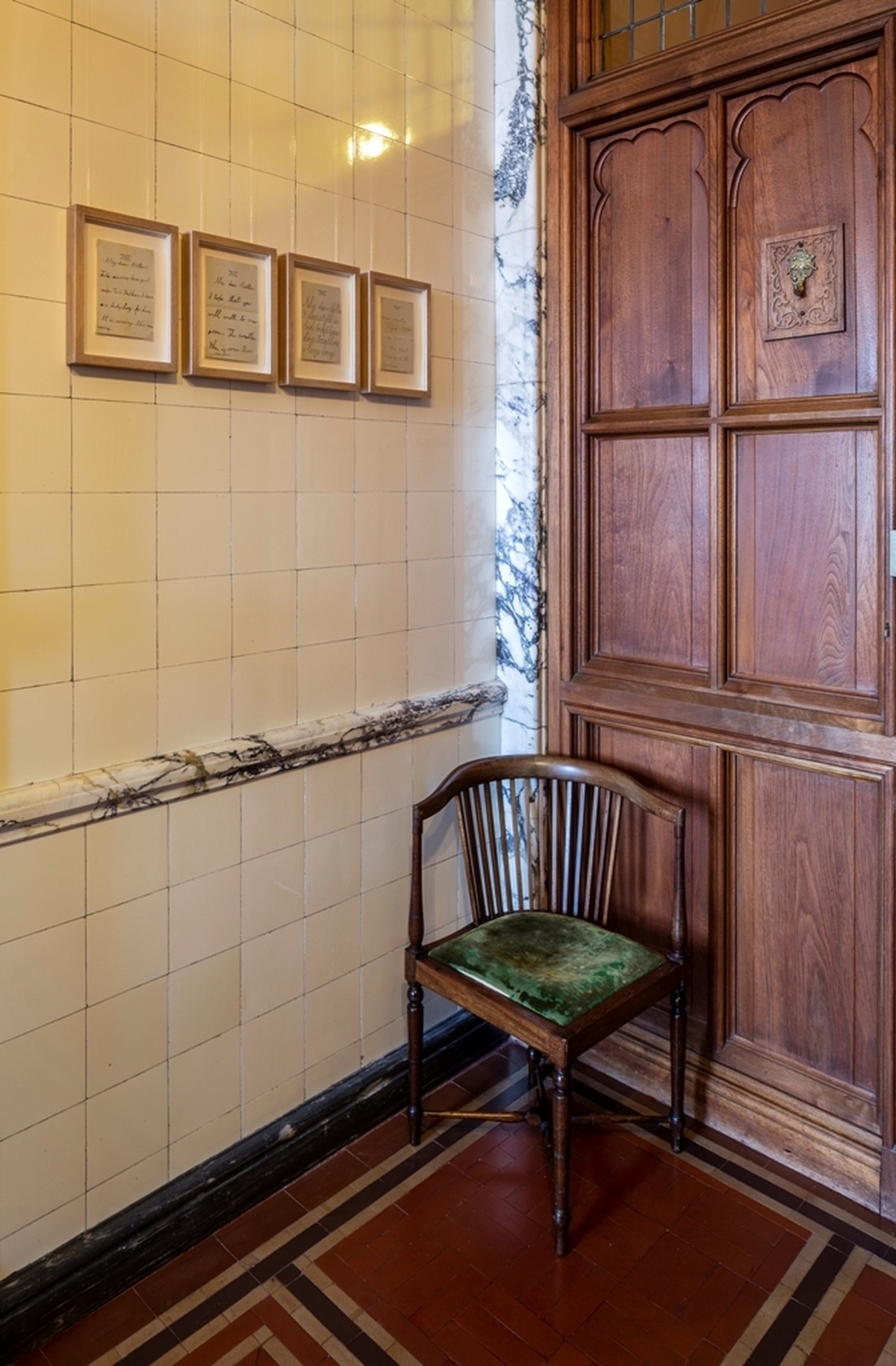 'My Dear Mother', Four letters from the archive, framed ﻿

A speech given by Augusta in 1934 to the North Bute Literary Society formed the basis for a sound installation She Was Known to You made in collaboration with actor Maureen Beattie. The tone of the recording, in the manner of writing, is quiet and reflective, and was sited in Augusta’s study. The various works encapsulate McVeigh’s process – a transformative dialogue between the context, the artist and the viewer – and her profound skills of observation.

Whitney McVeigh joined us at Mount Stuart to talk about her exhibition with Sophie Crichton Stuart, creative director of the Visual Arts Programme, Charlotte Rostek, Head of Collections for Mount Stuart Trust and Susanne Calice, member of the British Psychoanalytical Society. You can read an edited transcript of the conversation here. 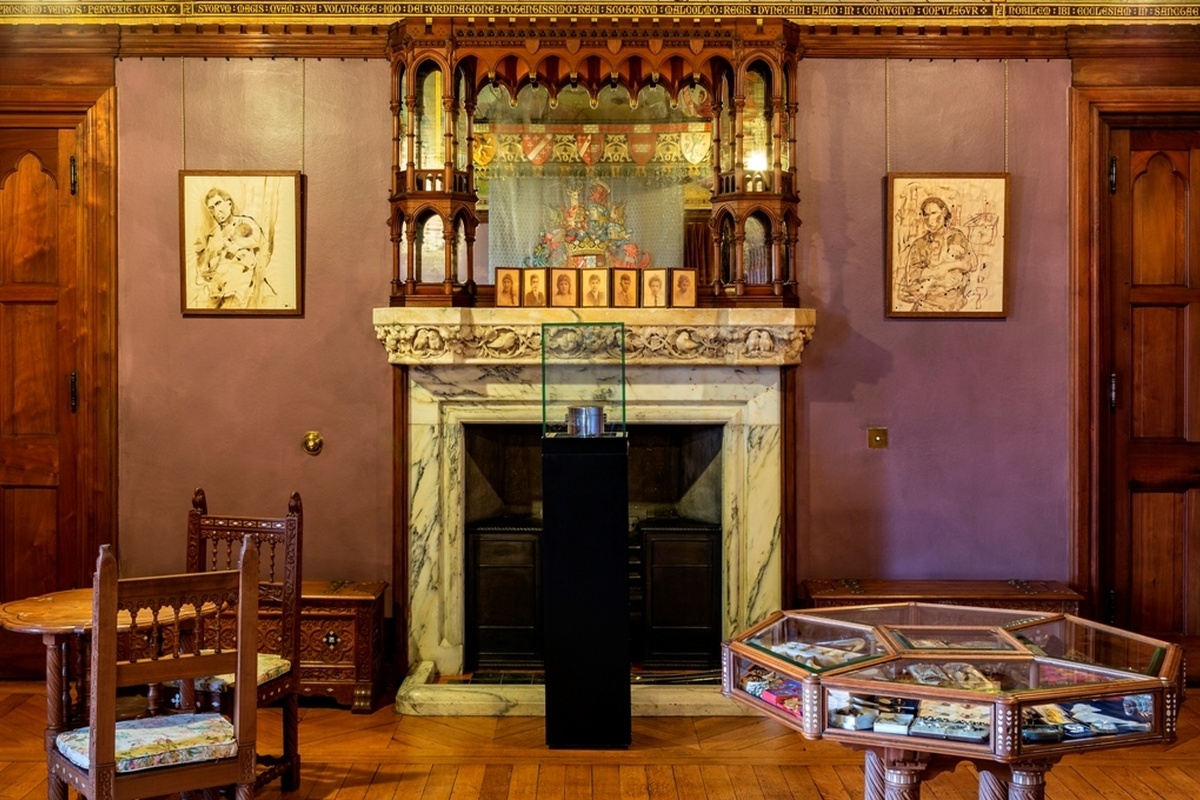 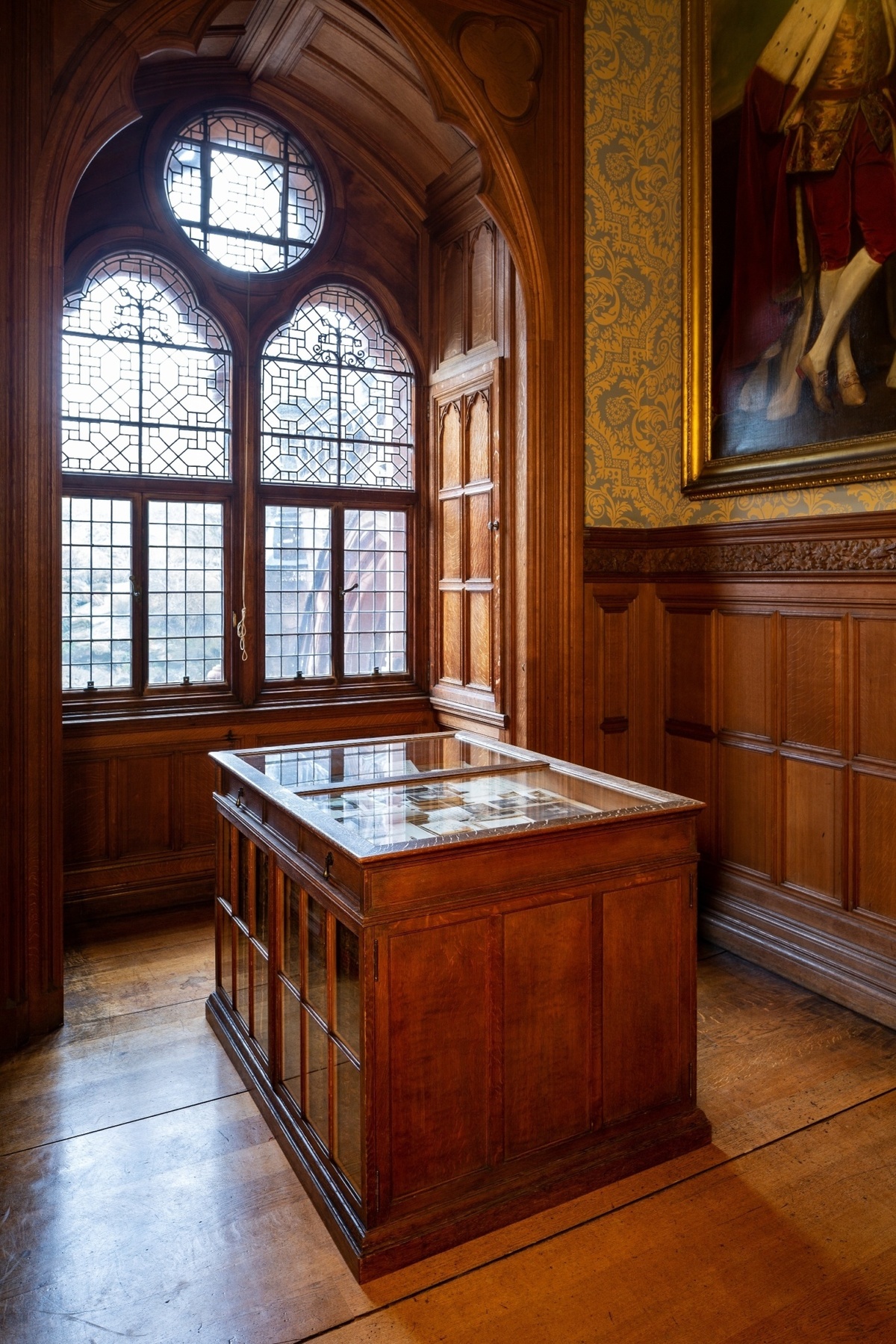 Whitney McVeigh (b. 1968, New York) lives and works in London where she is a Fellow in Creative Practice at University of the Arts, London. Recent solo exhibitions include Elegy to Nature at Eykyn Maclean, New York (2018), Language of Memory at Summerhall Arts, Edinburgh (2015-16) and Inventory: Invisible Companion at Kettle’s Yard, Cambridge (2015). In 2019, McVeigh will guest-curate Documentum, co-founded by Stephen Shore, William Boling and Dawn Kim, a periodical archiving and examining the cultural ephemera of our time. Group exhibitions include Plato in L.A.: Contemporary Artists’ Visions at the Getty Villa, Los Angeles (2018), and Glass Stress, White Light/White Heat at the 55th Venice Biennale (2013). McVeigh presented the short film ’Birth’: Origins at the end of life at the Royal Academy of Arts, London (2015). She was featured in BBC4 television documentary, Where is Modern Art Now (2009) alongside Michael Landy, Grayson Perry, Cornelia Parker and Sir Anthony Caro and in 2007 gave a short presentation of her work at Louise Bourgeois’ Salon in New York.

'Wait for Me', Limited Edition Hand-out, Text on Paper