Ilana Halperin: There is a Volcano Behind My House (2021)

Ilana Halperin: There is a Volcano Behind My House (2021)

For one of her largest solo exhibitions to date, and as part of the 20th anniversary year of visual arts at Mount Stuart, Ilana Halperin created new works inspired by the geology of the island of Bute.

Situated throughout the building, specially commissioned sculptures and watercolours referenced ‘immigrant’ minerals that form the objects and architecture within the neo-gothic Mount Stuart House.

Halperin’s work examines the relationships between rocks and minerals, between family and the deep time of the Earth. The geologic phenomena of the island became the backdrop to the exhibition: the extinct volcano behind her island home, the title.

Halperin described the exhibition as a constellation, combining personal, poetic and corporeal responses to the house and island.

She explained, "When I made these works before the pandemic, I had been imagining and trying to conjure more expansive ways of thinking about my own family, from very deep time family lines drawn in the calcium carbonate of our teeth and bones, to more immediate alternative families based not only on blood, but on how we choose each other, how we love each other, who and how we support one another”

There is a Volcano Behind My House was launched online in May 2021 with a film by Connelly Clark Films. Part tour, part interview the film is a gentle exploration of Ilana Halperin's work and reflects the changing context of the exhibition.

A series of 36 watercolours were displayed in Mount Stuart’s upper gallery as a direct response to the geology of Bute. In increasingly complex forms and palette, Halperin’s watercolours formed the key and the foundation to her works at Mount Stuart. Carefully situated in the heart of the house they represent the processes of formation, erosion and growth throughout the years and the seasons. They include references to the Suidhe, the volcano behind Halperin’s home on Bute, and the Highland Boundary Fault Line, which bisects the island, and binds two migratory landmasses together. 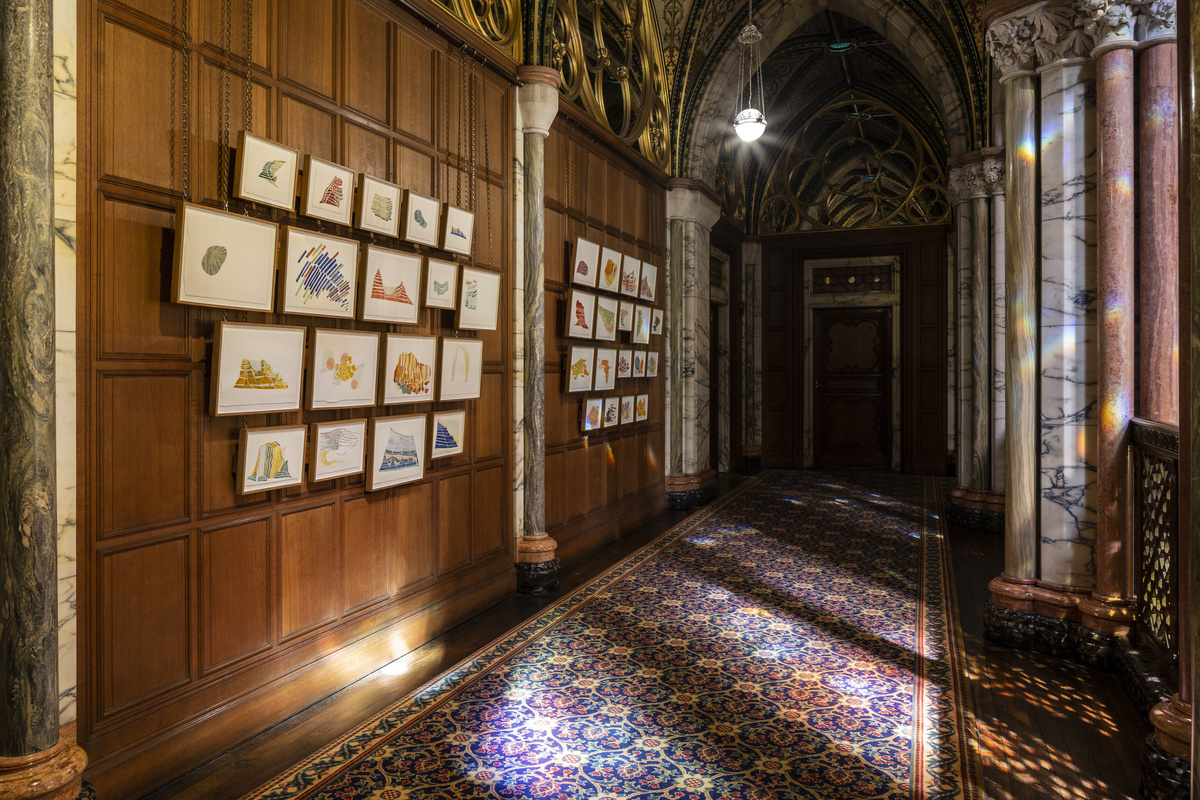 For the exhibition, Halperin worked with designer and producer Bute Fabrics to create two large scale woven textile works inspired by her field studies. A third textile work made in collaboration with KnitstanbulTurkey was displayed in the Drawing Room.

Halperin noted, “Textile, like sedimentary rock, is produced through an incremental process of growth - a geology of accumulated material." 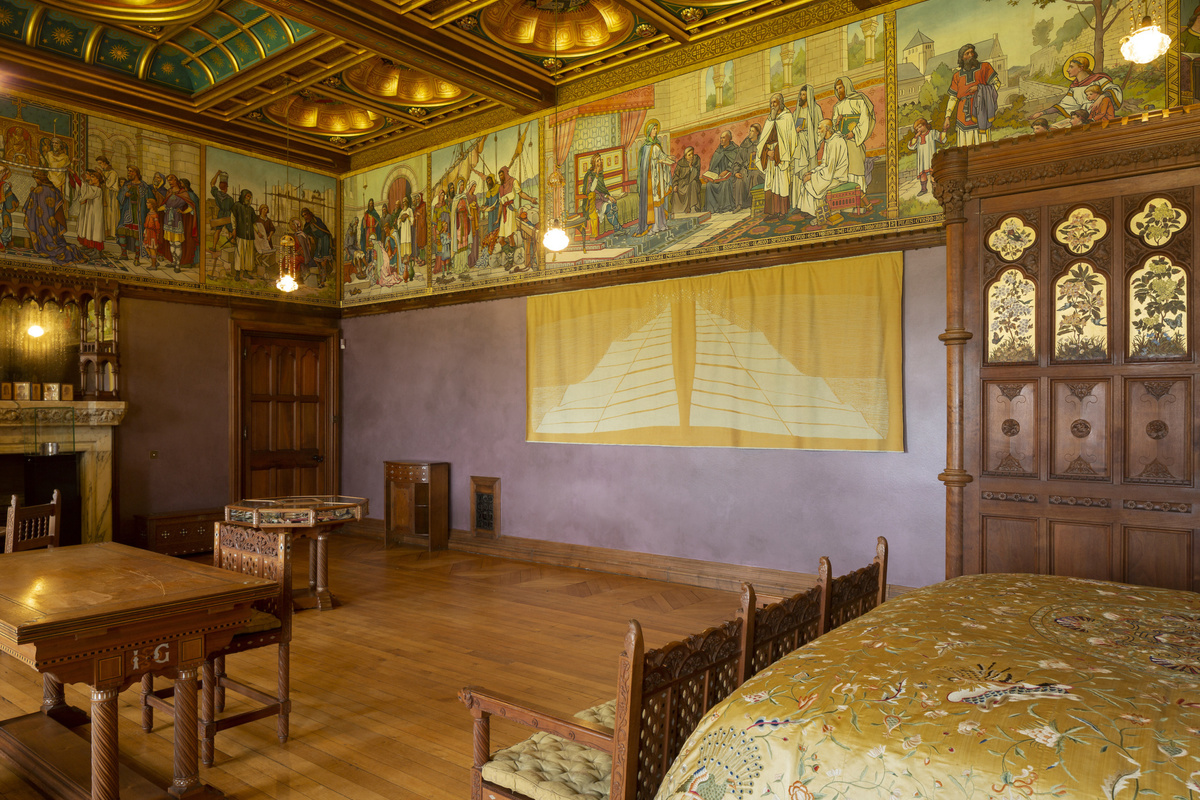 A new site specific work in Mount Stuart’s library, meanwhile, referenced the shimmering Mica in the ceiling of the Drawing Room. Sourcing mica that is hundreds of millions of years old from both sides of the Atlantic, Halperin presented an alternative geologic library of laser etched ‘books’ of Mica alongside research and archival material. 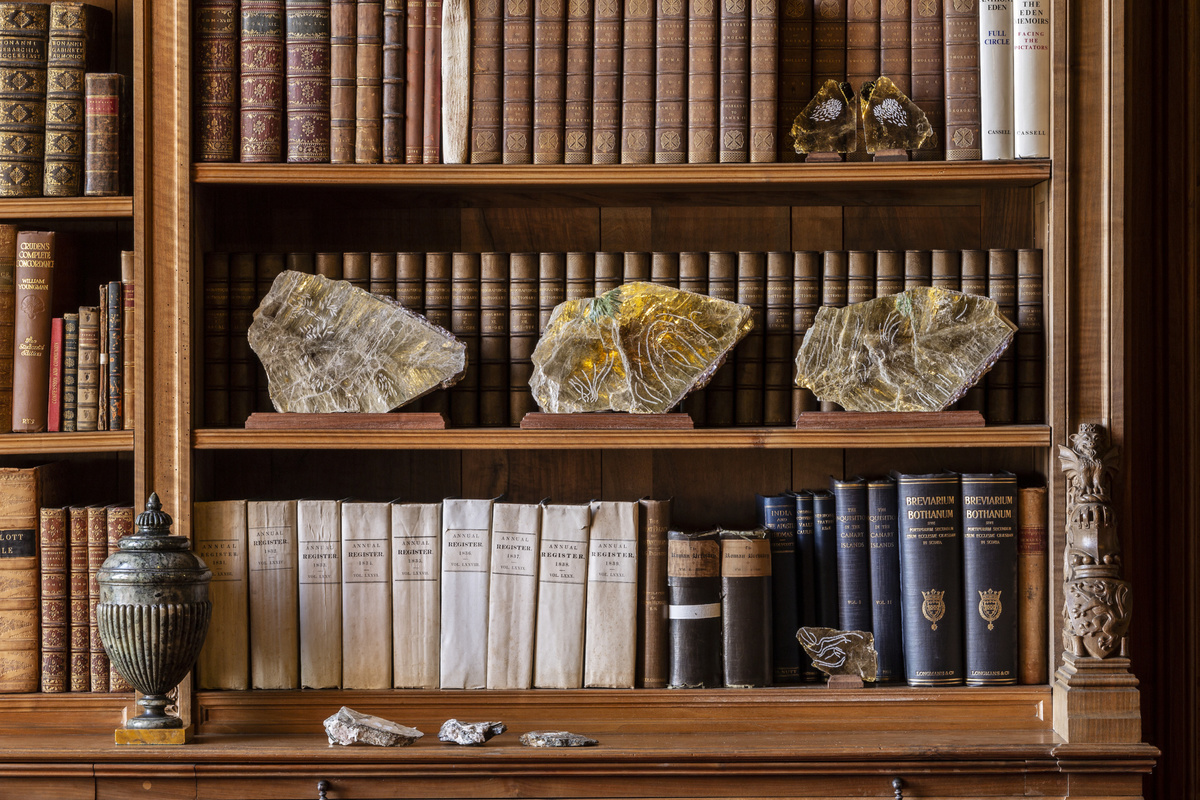 A sculptural installation was displayed in the Mount Stuart Crypt in which notions of geological time collapsed and morphed. Continuing her work with the Fontaines Pétrifiantes de Saint-Nectaire in France, Halperin submitted a series of eroded clay bricks and Victorian drainage tiles originally made on Bute to the same process that forms stalactites in caves. 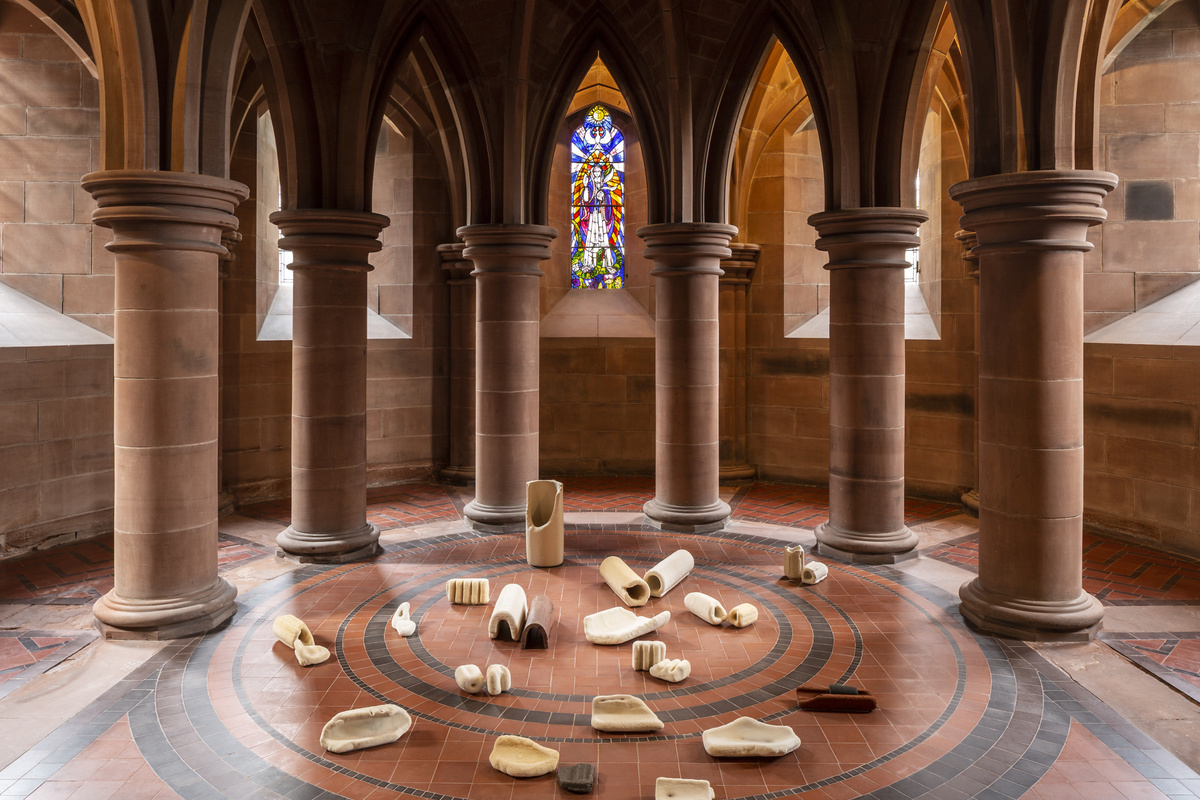 Alongside the exhibition, Mount Stuart and Patricia Fleming Gallery developed Excerpts from The Library: An Audio Field Guide. The piece features contributions from Dr. Andrew Patrizio. Presented as part of Glasgow International 2021, the field guide builds on Halperin’s narrative performative lectures to tell a new story of love, lava, loss and the unexpected journeys that we found ourselves on together. Leading from the Fossil Grove in Glasgow, deep into the exhibition at Mount Stuart and on to a quiet volcanic basin nearby, listeners were invited to embark on a domestic geologic field excursion. It continues to be relevant long after the close of the exhibition and you can listen to the work here.

Considering her response to Mount Stuart Ilana Halperin added, “The first time I visited Mount Stuart, many years ago, I was struck by the deep geologic nature of the house, from the core samples of marble which travelled up from Sicily – immigrant rocks settled in their new home; to the petrified seas found in the fossil rich limestone of the vast stairwell in the Great Hall. It was as if the house itself was an Anthropocene phenomena, among the many geologic wonders one could encounter on the island”.

As an immigrant herself, a New Yorker who lives and works in Scotland, Halperin views her own movements as a fleeting continuation of a much older migratory tradition, one also enacted by her relatives who fled during seismic waves of pogroms. Her work is an evolving embodiment of geologic and human migration and change.

All photos by Keith Hunter. Courtesy the artist and Patricia Fleming Gallery, Glasgow.