The Island of Bute is set to celebrate HM The Queen’s Platinum Jubilee weekend in style. 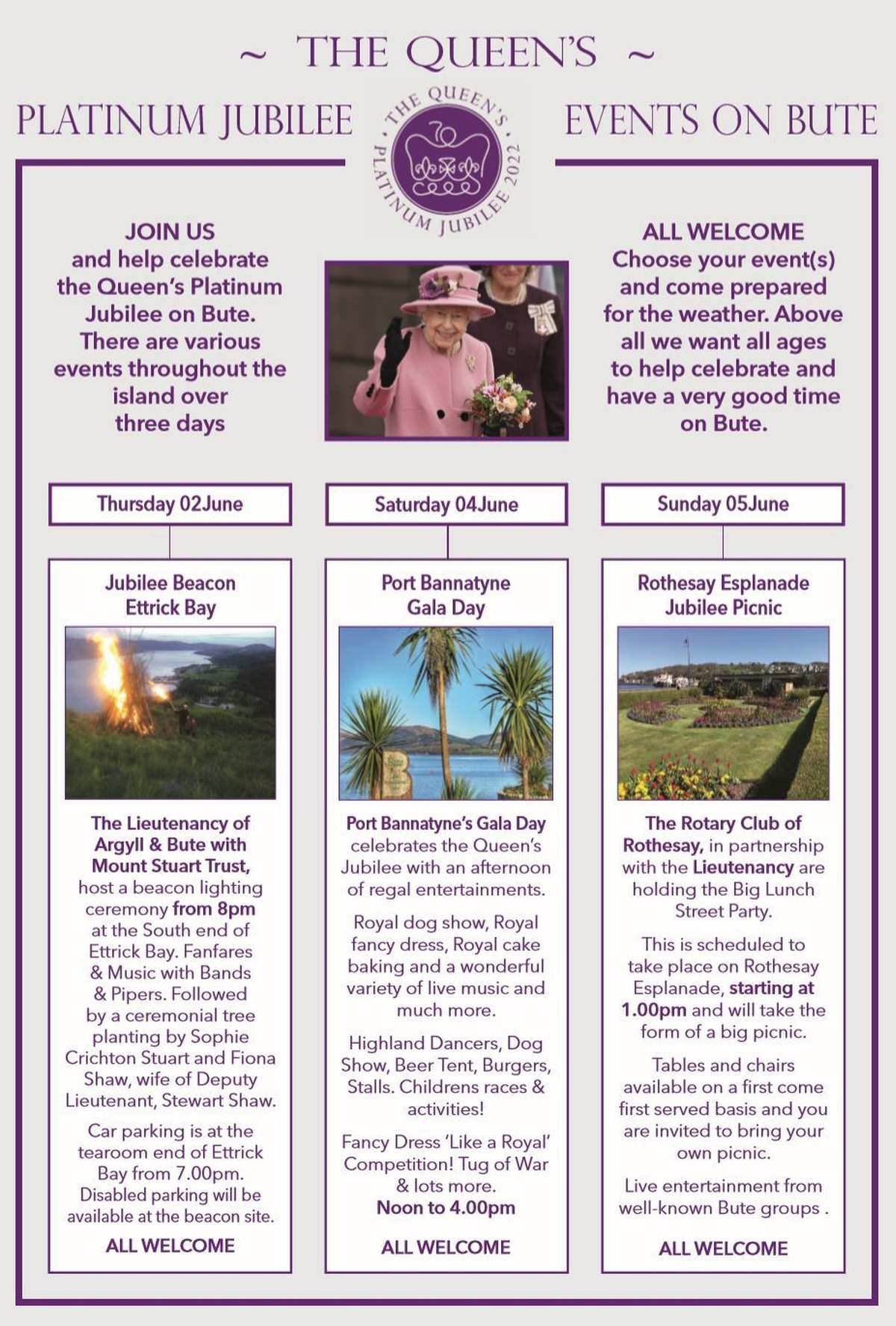 On Thursday 2 June, to mark the 70th Anniversary of the reign of Her Majesty The Queen, the Lieutenancy of Argyll & Bute in partnership with Mount Stuart Trust are planning to light a beacon at the south end of Ettrick Bay. The ceremony, scheduled to start at 8.00pm will include a trumpet fanfare from Bute Community Band, a specially commissioned pipe tune “Majesty”, composed by Pipe Major Stuart Little of Inveraray Pipe Band and played on this occasion by our own band, Rothesay and District Pipe Band under the direction of Pipe Major Neil Gillies, a ceremonial tree planting by Sophie Crichton Stuart and Fiona Shaw, wife of Deputy Lieutenant, Stewart Shaw. Car parking will be arranged at the tearoom end of Ettrick Bay from 7.00pm , allowing time for a healthy walk across the beach. Disabled parking will be available at the beacon site.

As a permanent tribute to Her Majesty the Queen, the area at the south end of Ettrick Bay is being converted into a wild garden/picnic area to commemorate her Platinum Jubilee and to be enjoyed by locals and visitors. This is a community project with the support of Mount Stuart Trust, the Rotary Club of Rothesay, Bute Conservation Trust, the Lieutenancy and local schools to develop this into a community space “fit for a Queen”! By the end of the year, the area will have 70 trees planted, one for each year of the Queen’s reign in line with her wishes to create The Queen’s Green Canopy across the country and Commonwealth. It will also be enhanced by a beautiful dry-stane windbreak and a tribute from local schools. Local businesses, charities, other organisations and members of the community will be able to sponsor a tree and have that sponsorship acknowledged. Anyone wishing to do so should email contactus@mountstuart.com. A suitably descriptive interpretation board is also planned.

To conclude the weekend, The Rotary Club of Rothesay, in partnership with the Lieutenancy are holding the Big Lunch Street Party. This is scheduled to take place on Rothesay Esplanade, starting at 1.00pm and will take the form of a big picnic - tables and chairs available on a first come – first served basis and you are invited to bring your own picnic; with live entertainment from well-known Bute groups including, Bute Community Band, Bute Ceilidh Band, Rothesay and District Pipe Band, Ballianlay Choir, The Ann McIlroy School of Dance and the Margaret-Anne Speirs School of Dance; and a local Market where members of Bute Kitchen, Isle of Bute Arts Club and other organisations will be able to sell their produce. Pitches are free and anyone wishing to secure a spot should contact the Rotary Club of Rothesay, through their website contact details via Club Secretary.