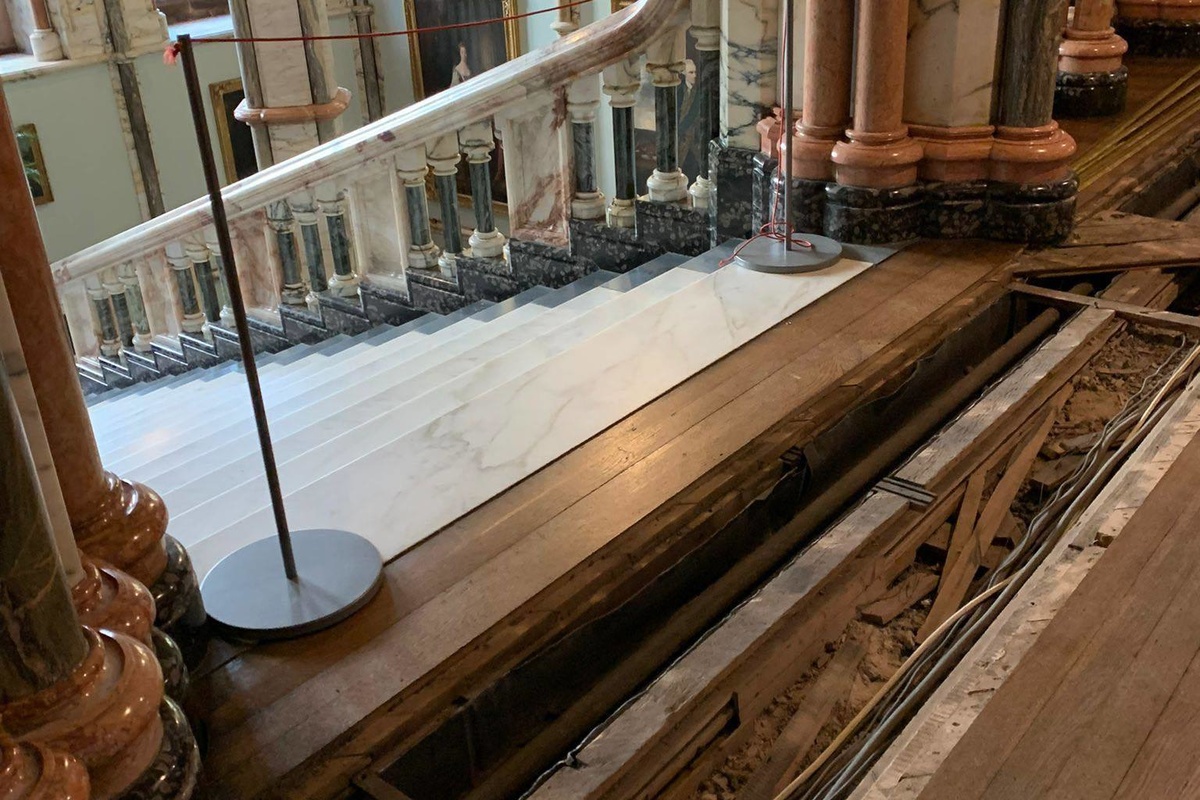 Mount Stuart House is an important category A-listed building in the neo-Gothic style, an amalgamation of a grand 19th century house built between the wings of an earlier Georgian period house which had burnt down in 1877. The new house was commissioned by the Third Marquess of Bute was built over a period of twenty-five years and was pioneering in its incorporation of the most modern amenities of its day. Following the death of the 3rd Marquess, his widow and the 4th Marquess continued the programme of building works completing the swimming pool - one of the first heated indoor pools that adjoins the Turkish Bath (not fully completed) - and Marble Chapel.

The house was one of the most technologically advanced buildings of its age and the first house in Scotland to have electrical provision, telephone connection and a passenger lift. In 1883, Mount Stuart was the first house in Scotland to install electric lighting, and from 1896, was furnished with specially designed furniture and fittings by the architect, Robert Weir Schultz. Weir Schultz carried out the installation of the electrical light fittings throughout the house in 1896 when the new wiring was installed. He designed fittings with distinctive glass pendant globes that are still in place at Mount Stuart. 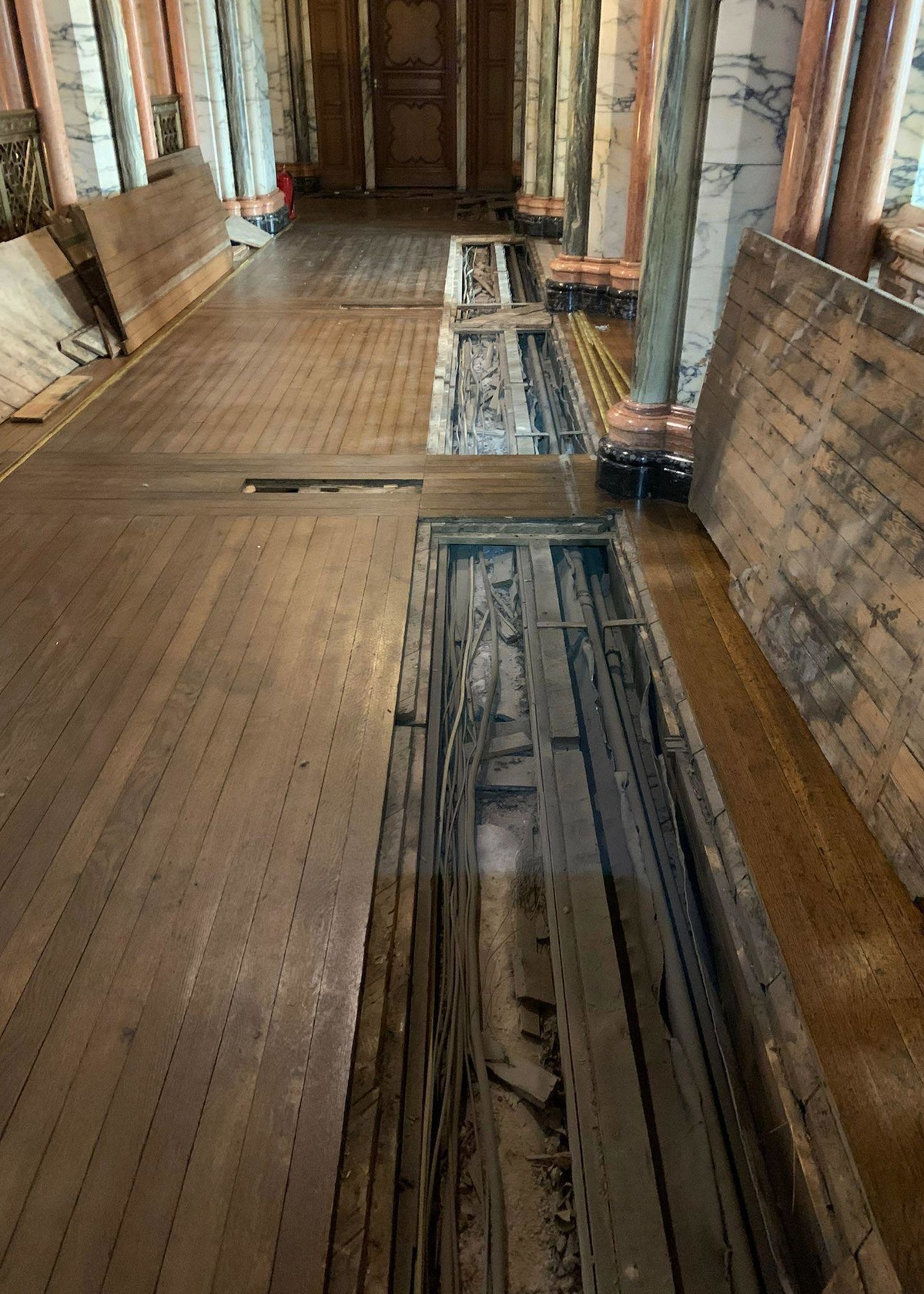 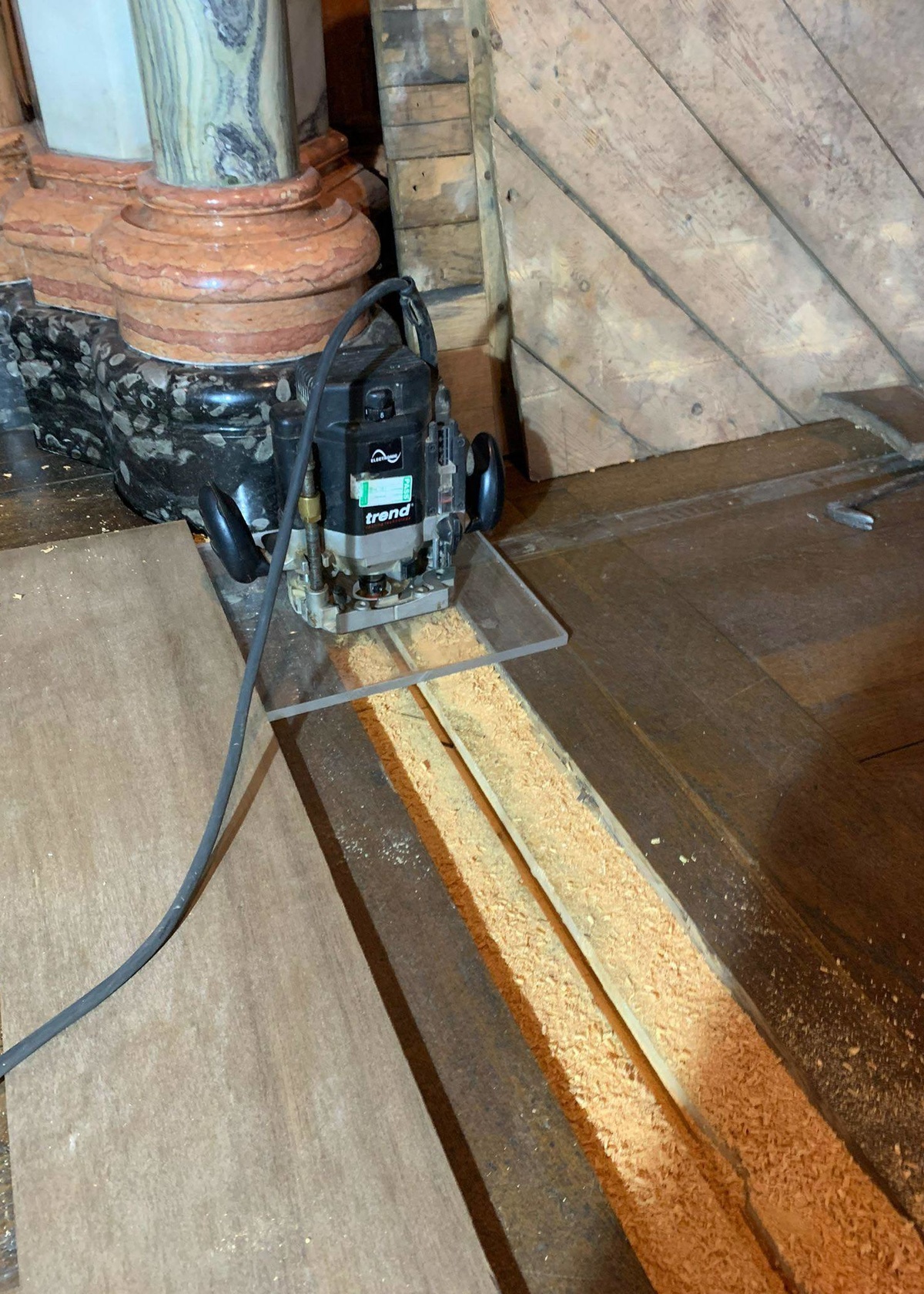 For reasons of both safety to public and staff and for protection of the listed fabric, fittings and contents of the House, all works have been tightly controlled over the past few months, whilst the house is closed to the public.

Works to light fittings will be carried out by a specialist lighting contractor who will refurbish and improve the fitments in parallel with works to the supply cabling.

Due to the routing of cables, the majority of works have been carried out through the basement of Mount Stuart, and the riser in the stone staircase. The floor in the corridor around the pulpit attic, and many of the floorboards on the first-floor gallery of the marble hall have been uplifted in order to accommodate the works, giving incredible insight into the construction of Mount Stuart. Uplifting and re-fixing of floors and joinery has been undertaken by our in house team.

In February 2022, a ticket was found under the floorboards of the Gallery near the Lady Bute Room during the Rewiring Project. It was likely to have been originally wrapped around the Victorian electrical wires when they were delivered to Mount Stuart, and removed in the process of their installation in 1896. Read more about this fascinating discovery, and its importance within the innovative period in the architectural evolution of Mount Stuart - a legacy that is being continued today by the Mount Stuart Rewiring Project. Read Here. 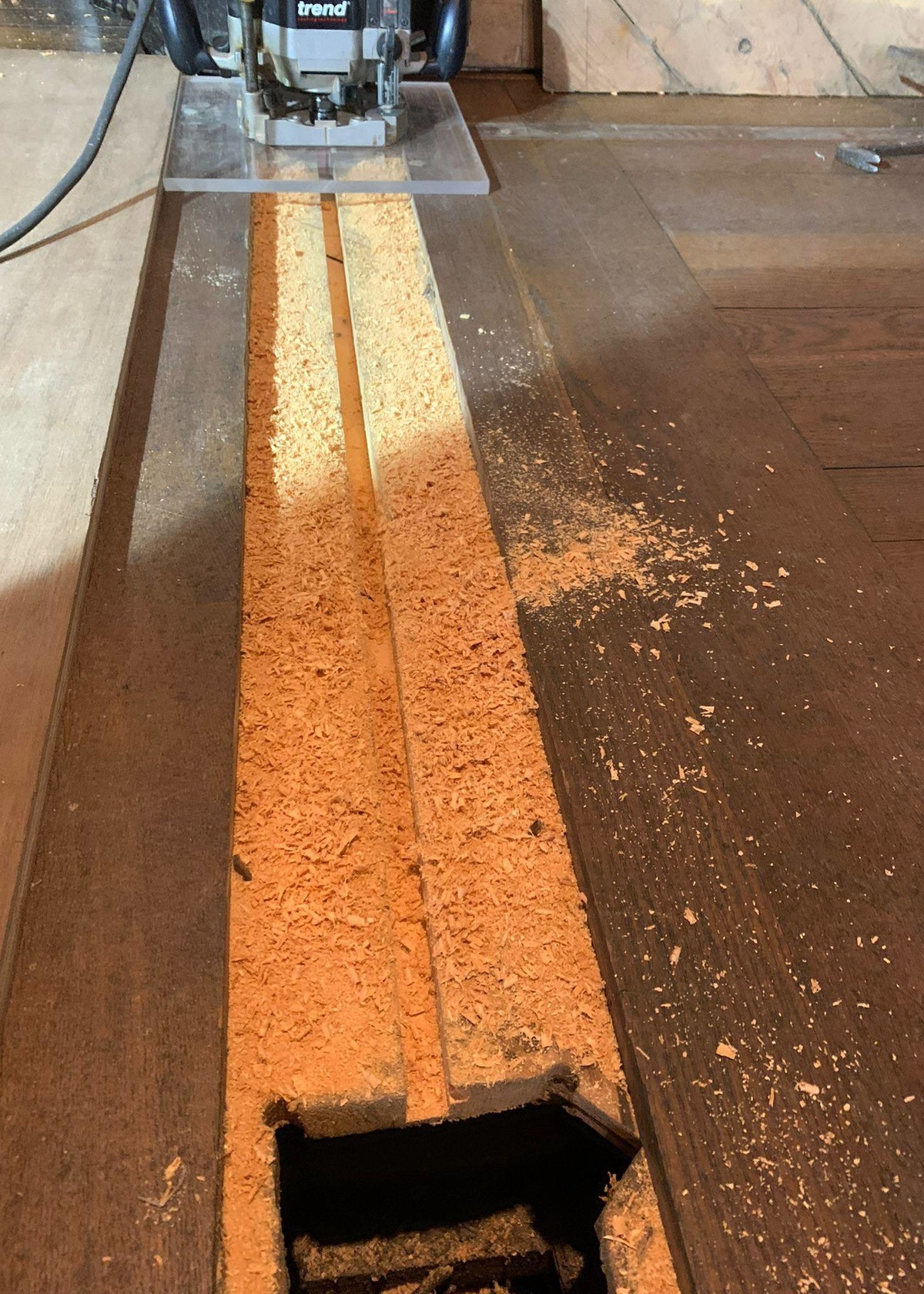 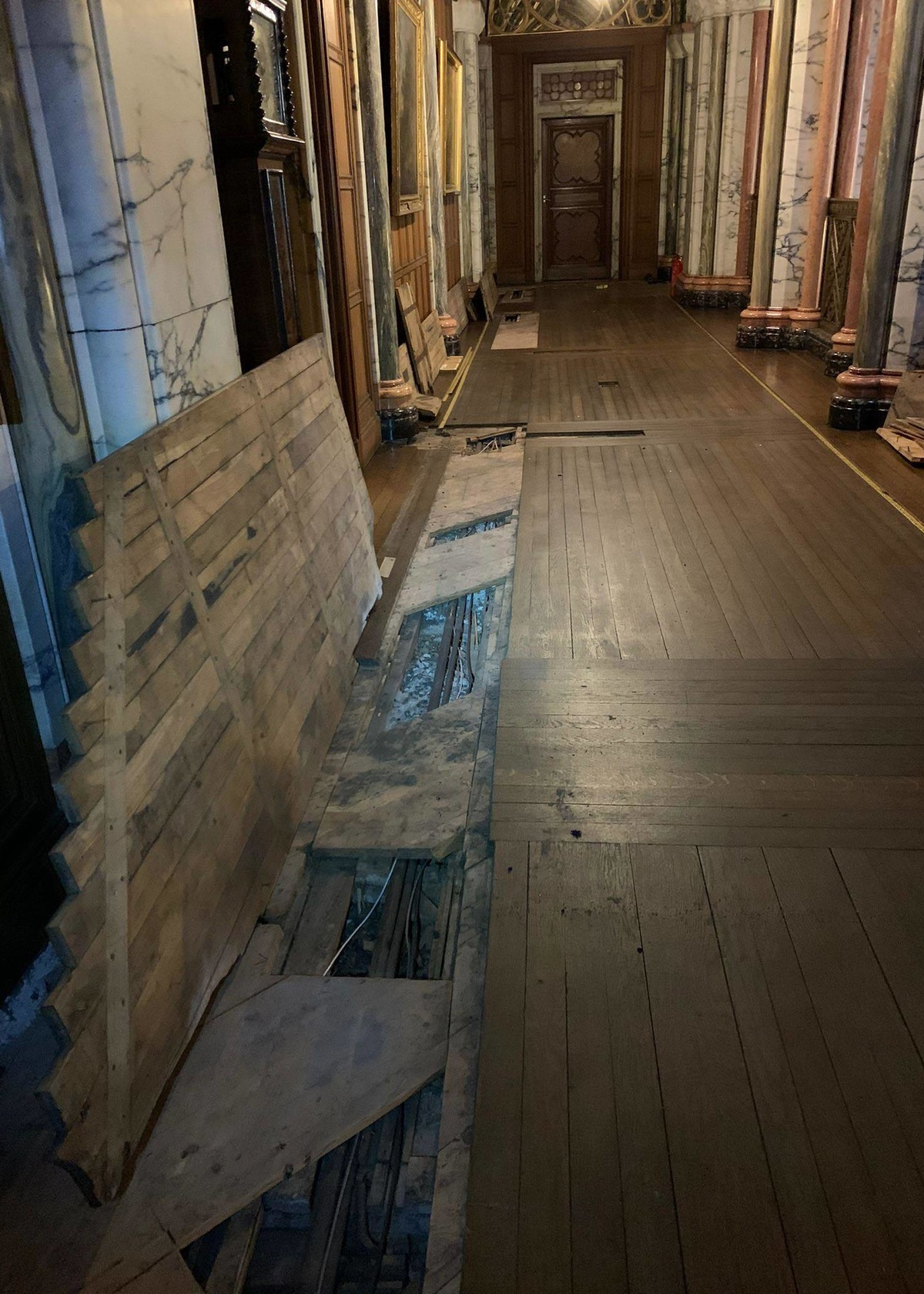